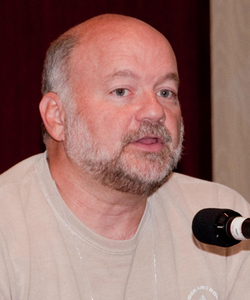 Bill Carle (1955-  ) has been a SABR member since 1977 and has served as chairman of SABR's Biographical Research Committee since 1988. Carle has attended every National Convention since 1979, when he was inspired by Cliff Kachline's and Joe Simenic's discussion of tracking down accurate birth and death data for major league players. Carle grew up in Bartlesville, Oklahoma, and has been a diehard Royals fan for many years. His work on biographical data continues, and the Biographical Research Committee regularly announces new discoveries.