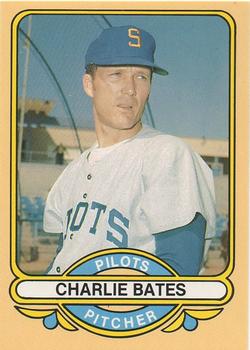 The brief existence of the Seattle Pilots included the fleeting major-league career of Dick Bates. The right-handed pitcher made his one and only big-league appearance in relief on April 27, 1969. Jet-lagged and facing the talented Oakland Athletics, Bates struck out three while allowing five runs in an inning and two-thirds. A shoulder injury later that season derailed his baseball career and any chance at redemption.

Charles Richard “Dick” Bates was born on October 7, 1945, the second son of Austin and Zella (Nickels) Bates. Along with his older brother, Daniel, Dick was born and raised in McArthur, Ohio, a small town 75 miles southeast of Columbus. Austin worked at the coincidentally-named Austin Powder Company, and Zella was a homemaker. Dick got his first ball glove at an early age, and the father and son played catch most nights after Austin came home from work. Austin, a former semipro ballplayer, coached Dick’s Little League teams and remained a source of knowledge and encouragement throughout high school. “He was very persistent,” recalled Dick. “He’d run me a lot and work with me on my pitches. If he hadn’t stayed on me, I probably wouldn’t have stuck with it as long as I did.”1

Sports was a way of life in McArthur. “It was the only thing to do in McArthur. You played some kind of sport year ‘round,” Bates remembered.2 As a freshman at McArthur High School in 1960, he made the varsity team in football, basketball, and baseball. Bates earned All-State Honorable Mention accolades in football and basketball, but it was on the pitching mound where he shined the most. “He just looked so smooth throwing the ball. He made it look like he wasn’t trying, yet that thing would really come in there,” recalled Bates’s football coach, Ron Fenik. “I remember it being February, there’d be snow on the ground, and he’d be out there after basketball throwing pitches.”3 During his junior year, Bates threw two no-hitters in one week.4 As a senior, he led the Generals to the district finals with a 6-1 record while batting .421 and striking out nearly two batters per inning.5 “I had a good fastball. My fastball was probably around 90-95, and I had a good slider and curveball,” recalled Bates.6

Scouts from the Pirates and Reds showed interest, but it was Tommy Thompson of the Washington Senators who signed Bates the day after his high school graduation in the spring of 1964. The pact included a signing bonus of $2,500 and salary of $400 per month.7

Within a few days, Bates left for rookie ball with the Wytheville Athletics of the Appalachian League. Only 18 years old and away from home for the first time, he grew up quickly. “Being out in the world was probably the best education I got, more than if I would have got to college,” Bates reflected in a 2018 interview. “That’s one thing I can always thank baseball for.”8 In nine appearances with Wytheville, including three starts, Bates posted a 1-0 record with a 5.28 record.

In August, he was promoted to the Single-A Geneva Senators of the New York-Pennsylvania League to help bolster an ailing pitching staff. Bates, the youngest player on Geneva’s squad, held his own against older competition. He pitched in six games, all starts, and finished the campaign with a 5-1 record and 3.89 ERA. His teammates, most of whom were single and college graduates, took him under their wing on and off the field. “In New York, the drinking age was 18 years old,” said Bates. “These guys would take me out with them. I’d never really drank, but you got broke in real quick. It was rowdy times growing up in baseball.”9

Bates spent 1965 toiling the mound for the Burlington (North Carolina) Senators in the Single-A Carolina League. In 26 starts and one relief appearance, he logged 151 innings while posting an 11-10 record and 3.81 ERA. He then went south and pitched in 10 games (four starts) with the Senators’ Florida International League outfit.

In 1966, Bates advanced to the Double-A York (Pennsylvania) White Roses, a Senators affiliate in the Eastern League. He pitched 197 innings in 31 contests (26 starts). He tossed 11 complete games, including three shutouts, tallied a record of 11-11, and had an ERA of 3.61.

Bates returned to York at the start of the 1967 season. In 11 games (six starts), he struggled to a 1-5 record with a 5.15 ERA. On June 9, he was demoted back to Burlington. He regained form in his first outing, tossing a two-hitter against the Durham Bulls.10 His second victory was a 12-inning complete game versus Lynchburg in which he scattered four hits, allowing only one unearned run.11 In 15 starts and one relief appearance with Burlington, he went 6-5 with a 2.35 ERA.

Bates spent the entire 1968 campaign with the Double-A Savannah Senators in the Southern League. During one successful stretch, he threw three consecutive shutouts, the last of which came against Sparky Anderson’s Asheville Tourists. Overall, Bates pitched in 33 contests (16 starts) and compiled a 9-10 record and 2.78 ERA. When it came time for the expansion draft that fall, Anderson got the word out about Bates. The Pilots selected the 22-year-old hurler with the 30th pick of the American League portion of the draft.

Bates, one of the younger players on the Pilots roster, had an excellent Cactus League showing in the spring of 1969. Much to his disappointment, however, he did not survive the final cut at the end of camp. He was assigned to the Vancouver Mounties, the Pilots’ Triple-A affiliate in the Pacific Coast League. Bates won his first two starts, allowing only two earned runs in 13 innings, before the Mounties traveled to Hawaii for a series against the Islanders. Bates took the loss in the series opener on April 20. Following the team’s contest on Saturday, April 26, several players were imbibing drinks at Don Ho’s bar when Vancouver’s manager, Bob Lemon, barged in and gave Bates the news: he was going to the big leagues and needed to get on the next plane to Seattle.

After quickly packing his bags, Bates caught a red-eye flight and arrived in the Emerald City the next morning. Sleep-deprived but full of excitement, he reported to Sick’s Stadium for Seattle’s noon game against the Oakland Athletics. Bates, who was told by Lemon he that wouldn’t pitch that day, watched from the bullpen as Pilots starter Mike Marshall got into trouble in the top of the sixth inning. Bates was shocked when he was told to start getting loose. After Sal Bando’s three-run homer off Marshall gave Oakland a 5-0 lead, Seattle manager Joe Schultz summoned the youngster from McArthur.

The first batter Bates faced was Danny Cater, who walked on five pitches. Rick Monday then came to the plate and homered, extending Oakland’s lead to 7-0. As Bates recalled, “It was a fastball in the middle of the plate.”12 He settled in and struck out the next two batters, Dick Green and Dave Duncan, before retiring Oakland starter Rollie Fingers on a groundout to end the frame. Bates returned to the mound for the top of the seventh. He walked the leadoff man, Bert Campaneris, who stole second. Bates struck out Tommie Reynolds and retired future Hall of Famer Reggie Jackson on a ground ball to second. After Bando drew a walk, Cater and Monday each doubled, scoring three more runs and making it a 10-0 shellacking. Schultz had seen enough and brought in reliever John Morris. Bates was charged with five earned runs in 1 innings pitched, giving him an ERA of 27.00.

Bates remained with the Pilots for a few more days but did not appear in another game before being optioned back to Vancouver. He was part of a constant roster churn that season by the Pilots, who set a single-season record at the time of 53 players used.

There are several mentions of Bates in Ball Four, Jim Bouton’s tell-all memoir about the Pilots’ lone season. In one, Bouton expressed annoyance that Bates had been called up rather than him. Another ran as follows: “Dick Bates was sent back down to make room for Darrell Brandon. I’m not sure what they think they’re doing, but at a guess front offices are more interested in players who are far than those who are near. They were more interested in Bates than in Brandon or Bouton, but only until they saw Bates up close.”13 Bates’s reaction when he read the unflattering passage: “Ouch.”14

On May 19, Bates, a left-handed hitter, hit his first and only professional home run in a game against Tucson. “I don’t think it cleared the wall by much,” Bates humbly recalled.15 His homer provided all of the run support he needed in the complete-game victory.

However, he soon experienced arm trouble that would derail his career. He felt a pop in his arm one day while throwing, an injury he believes was a torn deltoid muscle. After that, Bates felt like he was being poked with a hot iron whenever he tried to throw hard. Cortisone injections failed to provide relief. He remained in Triple-A for the rest of the ’69 season, finishing with a 6-9 record and 3.93 ERA in 23 games (21 starts).

The Pilots were in a dire financial situation following their inaugural season. In the spring of 1970, ownership declared bankruptcy, paving the way for the team to be sold to Bud Selig and relocated to Milwaukee. Bates started the season with the Portland Beavers, Milwaukee’s Triple-A affiliate. He appeared in three games out of the bullpen, lost his only decision, and allowed five runs, all earned, in seven innings. He was then sent back to the Southern League to pitch for the Double-A Jacksonville Suns. In 18 games (15 starts), Bates had a record of 7-6 and recorded an ERA of 3.87. Hampered by persistent arm troubles, he decided to call it quits on his baseball career. “I just couldn’t throw, it hurt me so bad.”16 In 177 games across seven minor-league seasons, Bates compiled a record of 57-58 with a 3.60 ERA.

Following his playing career, Bates got a job in the resort business with the help of J.W. Marriott, who he had met when he was in the Senators organization. He completed a management program at Camelback Golf Club in Phoenix, Arizona, and worked there during the 1970s. Dick met his wife, the former Leslie McKinley, shortly after his baseball career ended. Leslie is a descendent of President William McKinley. The couple have twin daughters (Kim and Steph) and a son (Mark). As of 2021, Dick was the general manager of the Arizona Biltmore Golf Club. He has been in this position for more than three decades. He tried to retire in February 2021 but was talked into staying on for a while longer.

Bates maintains a connection to his former franchise. He has attended Pilots reunions, and his golf club hosts the Milwaukee Brewers’ executives for a tournament every spring. Despite the brevity of his major-league career, Bates has no regrets. “Everything worked out great,” he said in 2021. “I wouldn’t change a thing with how everything went, getting out of baseball and getting in the golf business.”17

Special thanks to Dick Bates for verifying information and providing memories of his career in a July 2021 telephone interview.

This biography was reviewed by Gregory H. Wolf and Rory Costello and fact-checked by Kevin Larkin.