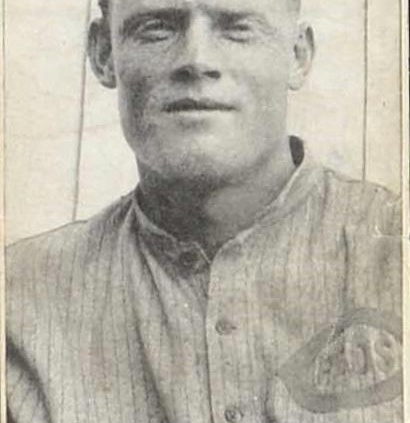 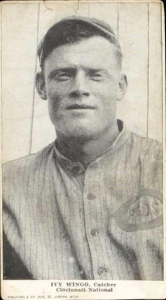 A fiery, redheaded, energetic catcher, Ivey Wingo retired with the National League record for games caught in a career, 1,233. Wingo was a popular man with teammates and fans. His belief in civic duty was demonstrated in 1918 when it was noted in a Sporting News article that he had purchased $7,000 in Liberty Bonds during World War I.(1) Ivey’s competitive nature was shown in an incident during his minor league managing career. One umpire twice removed Wingo from the same game. He was first ejected for arguing and was later chased again when he was found to be hiding in the bullpen.(2)

Ivey Brown Wingo was born, according to many accounts, in Gainesville, Georgia, on July 8, 1890. Other accounts state he was born in Norcross, Georgia. He did grow up in Norcross, remaining a resident there until his death. An obituary states Ivey’s father moved the family to Norcross in 1907. They were recorded as living in Norcross in the 1910 census. His father, Doctor Absalom Holbrook Wingo, Sr. and his mother, Nancy Alice (Smith) Wingo, raised a large family including Ivey’s brother A.H. “Red” Wingo who also played major league baseball. Red Wingo followed Ivey into professional ball and played in the major leagues with the Philadelphia Athletics and Detroit Tigers.

Ivey began playing baseball with a town team in Norcross. The town team featured at various times four future major leaguers: the Wingo brothers and a second set of brothers, Roy and Cleo Carlyle. Ivey entered professional baseball in 1909 with the Greenville club of the Carolina Association, a Class D level ball club. He earned a salary of 50 dollars a month. Roger Bresnahan and the St. Louis Cardinals purchased Wingo’s contract late in the 1910 season. He was used to warm up pitchers at the tail end of the season with the Cardinals. On April 20, 1911, Wingo made his major league debut. He went on to appear in only 25 games that season. In 1912 he became a regular catcher for the Cardinals, hitting .265 in 100 games.

A left-handed hitter, Wingo was known more as an offensive catcher. Still, he was a good handler of pitchers with a strong arm. But Wingo held records for most errors by a catcher both in a season and career post-1900. A contemporary account stated that most of his errors were on high throws that sailed over second base on stolen base attempts.(3) The strength of his arm was demonstrated in a Baseball Magazine article in May of 1914. In a chart it was shown that Wingo threw out 92 base stealers in 98 games, an average of 0.94 per game.

He continued as a Cardinal in 1913. After the season Wingo was selected to participate in a world tour led by John McGraw and Charles Comiskey. It was to feature players from the New York Giants and Chicago White Sox. Wingo, although not a member of either club, was with the tour from the beginning. Some players backed out of the tour after reaching the West Coast, including Giants pitcher Christy Mathewson and White Sox first baseman Hal Chase. Another interesting dropout from the trip was White Sox second baseman Morrie Rath, later a teammate of Wingo’s on the Cincinnati Reds.

The tour began in the states immediately after the season was over. They played 33 games in small towns as they headed west from Chicago. Eventually ending up in Vancouver, they sailed from there to Japan. Games were played in Japan, China, Australia, the Philippines, Egypt and Europe. It was truly a world tour. The players returned home on March 6, 1914. Returning from Liverpool, England, they were delivered to the U.S. shore by the ocean liner Lusitania. A year later the Lusitania was to be sunk by a German U-boat during World War I.

Wingo played the 1914 season in St. Louis, hitting .300 for the only time in his career. His excellent athletic ability was shown, as there was discussion of moving him permanently to the outfield. The move was discussed in part to get catcher Frank Snyder into the lineup more frequently but also because of Ivey’s athletic ability. Baseball Magazine named him to its all-league team.

In October 1914 it was announced that he had signed a contract with Buffalo of the Federal League.(4) He did not play there as he was traded from St. Louis to Cincinnati and signed — according to the February 10, 1916, issue of The Sporting News—a large “war time” contract to stay in the National League. Bidding wars between the new Federal League and the established National and American leagues raised many players’ salaries. Wingo’s salary was raised to $6,500 a season, an increase of $2,000. In 1915, following the demise of the Federal League the Reds attempted to trade Wingo to remove his large contract from their budget. Fans in Cincinnati signed a petition requesting the Reds to not trade him; Reds management gave in and kept him. Manager George Stallings of the Boston Braves attempted to obtain Wingo but was rebuffed by the Reds.

In 1916, while still a player, Wingo served as the interim manager of the Reds for two games, earning one win and one loss. In 1919 Wingo helped lead the Reds to their first world championship. He had begun the season with a severe cold. He recovered to platoon with Bill Rariden throughout the season; Rariden generally played against lefthanded starters, and lefty-swinging Wingo played against the righthanders. Wingo hit .571 in the World Series as the Reds defeated the notorious “Black Sox” of Chicago.

Ivey remained with the Reds as a player through the 1926 season, serving mainly as a coach that final season. Wingo turned down an assistant manager’s job with Cincinnati in 1927, instead looking for a manager’s job. He received his release from the Reds in order to take the manager’s position for Columbus of the American Association. Columbus was a club Reds owner and president Garry Herrmann had purchased to serve as a farm club for Cincinnati. Wingo was not successful there as the team finished in last place with a record of 60 wins and 108 losses. A 1919 World Series opponent, Nemo Leibold, replaced him as manager of Columbus.

Ivey returned to the Reds as a coach in 1928 and 1929. The following year saw him ending his professional playing career with his release from the Atlanta club of the Southern Association, where he served as a coach for manager John Dobbs and played a few games as a catcher. A main reason for his release was that he could not catch enough games to please the ownership. He served the Reds one last time as a coach in 1936.

Wingo returned to his hometown of Norcross and his wife, Mattie May (Jones), after his baseball career. He was retired for only a short time, passing away on March 1, 1941. At his death, Wingo was eulogized by former teammate Eppa Rixey: “Ivey was one of the best hustlers on the team. He was a fine, intelligent catcher and played every minute of the game. He was my good friend and I am deeply sorry to learn of his death.”(5) After funeral services at the Norcross Baptist Church, Ivey was buried in the Norcross Town Cemetery. His wife and a son, Billy Jones Wingo, survived him.

In 1993, Ivey Wingo was posthumously selected to the Georgia Sports Hall of Fame.

[Editor’s Note: There is some question about the spelling of Wingo’s first name. Most sources spell it “Ivy.” However, Total Baseball (7th edition), “The Official Encyclopedia of Major League Baseball,” lists him as “Ivey.” We have chosen to use “Ivey.”]