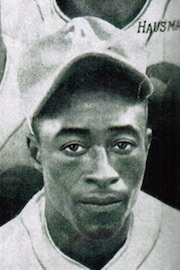 Jesse “Bill” Williams was one of the premier defensive infielders in the Negro Leagues during his career. “He could field anything that came his way at short and throw batters out from deep in the hole,” one writer said in describing his skills.1 He is also known as the Kansas City Monarchs player who switched positions to make room for Jackie Robinson.

Jesse Horace Williams was born to Willie W. Williams and Carrie M. Austin on June 22, 1913, in Henderson, Texas, 130 miles east of Dallas. Little is known about his parents or his childhood other than the fact that he was living with his widowed maternal grandmother, Julia (Austin) Gipson, at the time of the 1920 census.

Williams played for the semipro barnstorming Mineola (Texas) Black Spiders in the late 1930s. “The Spiders, dressed in grey baseball jersey [sic], played other all-Black teams from across the country. Each baseball game drew nearly 200 people. The team became well-known, and liked, by their fast-paced, Harlem Globetrotter style.”2 The Black Spiders entertained fans before games with routines like shadow ball, a pantomime show with an imaginary ball and players making acrobatic catches. Other Black Spiders antics included their catcher receiving pitches during games while sitting in a rocking chair behind home plate.3

In 1939 Williams played in an exhibition game for the Chicago American Giants that ended up being an audition. The American Giants faced the Kansas City Monarchs that day in Waco, Texas, and Williams got two hits and fielded every groundball in his vicinity.4 The Monarchs were so impressed by Williams’s performance against them that they decided to sign him.

Joining the Monarchs was a dream come true for Williams. “It was every Black boy’s ambition to become a Monarch,” he once said. “And white guys around there would want to become a Yankee. That’s the only thing that you knew.”5

Williams, who was 5-feet-11, weighed 160 pounds, and threw and batted right-handed, hit .216 as a utilityman in 26 Monarchs games in 1939. He played more often and performed much better offensively the following year, hitting .368 with one home run and 24 RBIs in 31 games. Even in the seasons in which Williams delivered a high batting average, he never hit more than two home runs, “but he could bunt and loved being up in clutch situations. He generally batted near the bottom of the batting order.”6

The Monarchs won the Negro American League pennant every season from 1939 through 1942 and Williams was part of all four championship teams. In 1941 he played a steady shortstop and hit .257 in 31 games. The Monarchs’ barnstorming tour that fall included a high-profile matchup against the Major League All-Stars at Sportsman’s Park in St. Louis on October 5. The starting pitchers were future Hall of Famers Bob Feller for the All-Stars and Satchel Paige for the Monarchs. The major leaguers won 4-1 in front of 10,124 fans.7

Williams’s most significant contribution to a Monarchs championship came in 1942. After a decent regular season (.262 with 2 home runs and 19 RBIs in 40 games), the shortstop starred in the postseason. The Monarchs met the Homestead Grays in the Negro League World Series and Williams hit a team-leading .500 in the series. Paige was on the mound when the Monarchs clinched the championship in front of 14,029 at Philadelphia’s Shibe Park.8

Sportswriter Wendell Smith of the Pittsburgh Courier summarized that the 1943 game “was a great ball game. One packed with thrills and surprises. One cast in a setting as colorful and picturesque as any movie saga. One that will go down in history in brilliant lettering and stand out in bold relief until the pages upon which it is written wither in the dust of time.”9

Williams returned as the Monarchs’ shortstop in 1944, batting .240 in 20 games as the team went 35-51 and finished in fourth place, their first losing season since they joined the Negro American League in 1937.

While his defense continued to receive praise in the press, Williams switched to playing second base in 1945 to make room at shortstop for Robinson. Williams’s slick fielding and Robinson’s athleticism formed “one of the speediest doubleplay combinations in the league.”10

Williams’s superb defense continued after his transition to second base. “At second base is Jesse Williams who can go his left or right with equal ability,” the Davenport (Iowa) Daily Times wrote in 1945.11 He hit .285 in 32 games for the Monarchs in 1945 and the team returned to its winning ways, going 39-35 and finishing in third place.

On July 29 of that year, Williams returned to the East-West Game at Comiskey Park. He played second base and led off, with Robinson hitting second and playing shortstop. Williams went 2-for-5 with a triple and four RBIs in the West’s 9-6 win in front of 31,174 fans.12

The 1945 season was Williams’s last in the Negro Leagues. In 1946 he joined the Mexican League’s San Luis Potosi Tuneros, a team that finished last in the eight-team circuit. Williams batted .277 with 3 homers and 44 RBIs.13 (He was suspended by the Negro American League for his jump to Mexico.)14

In 1947 Williams toured with the Harlem Globetrotters baseball team, a sister squad to the flashy basketball team. Williams played shortstop for the Globetrotters when they barnstormed throughout the Midwest and West that summer to face local clubs or the traveling House of David team.

On May 30, 1948, Williams and the Globetrotters played the Cincinnati Crescents in Muncie, Indiana. The spectators also saw a sprinting and jumping demonstration by Olympic gold medalist Jesse Owens.15 Five months later, Williams reunited with his former Monarchs teammate Paige in an exhibition game at Wrigley Field in Los Angeles. Paige was available to pitch because his season with the Cleveland Indians had ended a few weeks earlier.

With his three-year Negro American League suspension for his jump to Mexico now over, Williams returned to the NAL in 1949. The press noted that “(T)he sensational shortstop, Jesse Williams, who was a tower of strength with the Kansas City Monarchs a few seasons back, has been obtained from that club and signed to a Clowns’ contract.”16 The Indianapolis Clowns, who had joined the NAL in 1943 when they were based in Cincinnati, finished the season in fourth place with a 37-67 record.

In early April of 1950, Williams’s absence from the Clowns was the talk of training camp in Jacksonville, Florida. According to the Pittsburgh Courier, “The holdout of two veteran performers, infielder Jesse Williams and hurler Andy Porter, kept the Negro American League Indianapolis Clowns from having their complete roster as they opened their 1950 training camp here this week.”17 Williams and the Clowns were at odds over salary. He ended up leaving the team and returning to the Globetrotters.

Williams journeyed to Mexico again in 1951, playing in one game for the Nuevo Laredo Tecolotes.18 The reason for his ever-so-brief stint with Nuevo Laredo is unknown, but he went from Mexico to Canada when he signed with the Class-A Vancouver Capilanos of the Class-A Western International League for the 1952 season. The 39-year-old Williams shifted from middle infield to third base for the Capilanos and made an immediate impression on his new fan base. It was cold on Opening Night when Williams “made his brilliant, smooth-as-cornsilk stop of Dario Lodigiani’s sharp smash to third base in an early inning in Monday night’s opener against Yakima,” a sportswriter noted.19 Williams batted .251 in 126 games for Vancouver.

The Capilanos released Williams before the 1953 season and a letter to the editor of the Vancouver Province speculated as to why Williams was let go: “Jesse Williams is much too old,” a fan wrote to the newspaper.20 Williams still felt youthful and signed with the Yakima Bears of the same league after his release.

Williams did not stick with the Bears; he was driving a bread truck in Kansas City by June.21 He was 40 years old in April 1954, when he signed with the Beaumont Exporters of the Double-A Texas League, a Chicago Cubs affiliate. He went 1-for-6 with Beaumont in what became the final eight games of his career.

Williams saw former Monarchs teammates and opponents move on to the American League or National League, but he never had that opportunity. Although he certainly had major-league fielding abilities, he was now too old to merit serious consideration from AL or NL clubs. Williams was 33 in April 1947, when Robinson famously joined the Brooklyn Dodgers.

Williams’s former Monarchs teammate and longtime major-league scout Buck O’Neil said in 1990 that Williams would have succeeded in the majors. “Jesse would be a very good player because he could do the job very well defensively,” O’Neil told the Kansas City Star. “Jesse ran well. He was a contact, spray-type hitter. Hit behind the runner. Get the runner over. I imagine in major-league baseball Jesse should be about a .265 hitter.”22

Whatever disappointment Williams carried from the unfortunate timing of his playing career did not change his positive disposition. Articles about him late in his life paint a portrait of a likable person with an inspirational perspective. When Williams went blind in 1985 after years of cataract issues, he reacted by saying, “I’m so thankful all of this happened in my old age. It could’ve happened earlier.”23

Blindness prohibited Williams from playing golf in the late 1980s, but it did not stop him from riding in the golf cart and laughing on the course with friends like O’Neil. “I had promised Jesse — and he wanted to do it — I was going to take him out to the driving range and let him see if he could hit that golf ball. He thought he could do it,” O’Neil said.24

Williams died in Kansas City at age 76 on February 27, 1990. He was survived by his wife of almost 26 years, Elaine Carmelita (Lee) Williams; two sons, Rostell and Ostell; 11 grandchildren; and 25 great-grandchildren.25 He is buried in Kansas City’s Mount Moriah Cemetery. Williams’s obituary noted that he was an active member of the Bethel AME church, the Pioneer Club Inc., and the Heart of America Golf Club.26 In addition to his family and community activities, he also left behind a legacy as one of the finest fielders in Negro Leagues history.

In addition to the sources cited in the Notes, the author consulted Ancestry.com, Baseball-Reference.com, and Newspapers.com. For Williams’s Negro Leagues statistics, the author used Seamheads.com.