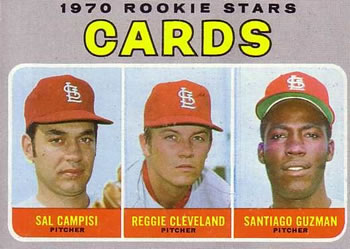 Sal Campisi grew up in the Bensonhurst area of Brooklyn, New York, loving his hometown Dodgers while hating the St. Louis Cardinals and dreading the sight of their star, Stan Musial, at the plate. Campisi recalled, “When I was only a few years old, my folks would take me to Ebbets Field for critical games between the Cardinals and Dodgers, and Musial would break my heart…and if Stan didn’t knock down the fences, Enos Slaughter did.”1 Campisi said of Musial, “I’d play hookey to go to Ebbets Field and there he’d be crouched over the plate, peeking around the corner. There was just no way he could do anything wrong in that old ball park.”2

Several years later, it would be the Cardinals who would sign Campisi to his first professional baseball contract as his senior year ended at Long Island University. The righty pitcher made his debut in the majors with St. Louis at age 27 in 1969. He pitched parts of the next two seasons at the top level as well before retiring from pro ball.

Salvatore John Campisi, the oldest son of Louis and Josephine Benvenuto Campisi, was born August 11, 1942, in Brooklyn. Louis was brought to the U.S. from Italy when he was three years old. As an adult, he worked as a welder and a burner in the Brooklyn Navy Yard. Josephine, a stay-at-home mother to three boys, was said to be the more devoted baseball fan in the family. Sal and his younger brothers, Ronald and Frank, grew up playing sports in the local Catholic Youth Organization leagues. Ronald joined the New York Police Department and for a time was assigned to work security for Lee MacPhail, general manager of the New York Yankees. Frank became a teacher and principal in the New York City school system.

Sal Campisi’s talent in basketball and baseball earned him scholarships, first to Most Holy Trinity High School in the Williamsburg neighborhood – an hour’s train ride from Bensonhurst – and then to Long Island University. The LIU baseball program was a good one, and Campisi didn’t let bad winter weather stop him. “Even in the middle of winter, I’d throw five to 10 minutes a day,” he later recalled. “We’d do a lot of work in the gym, like practice covering first base, sliding and other fundamentals. When we started playing games, we were a lot readier than most teams.”3

In 1964, Campisi compiled a 12-1 record for the Blackbirds with a 0.27 ERA, the lowest collegiate ERA in the country that year.4 He was named a Collegiate All-American.

Scouts for several major-league teams followed him, but it was Benny Borgmann, the legendary Cardinals scout who covered New Jersey, who signed him. Oddly, Borgmann only saw Campisi pitch once and it was the one game he lost, 3-1 to Seton Hall. The Blackbirds made eight errors in the first couple of innings. Borgmann was impressed, though, saying that with eight errors, most pitchers would have given up.5 Campisi accepted a $8,500 bonus6 to sign with the Cardinals. The payment also included $200 for his parents to travel to Rock Hill, South Carolina, his first minor-league stop, and see him pitch.7

At Rock Hill, Campisi appeared in 10 games as a starting pitcher, finishing with a record of 5-5 with a 2.79 ERA. He returned to Rock Hill in 1965. With Sparky Anderson as his manager, Campisi began a transition to the bullpen, appearing in 31 games and starting 12. He finished the year with a 10-5 record and a 1.95 ERA that led the Class-A Western Carolinas League.

Campisi moved up to the Cedar Rapids Cardinals of the Class-A Midwest League in 1966. There he pitched primarily in relief, starting only seven of 32 games. He posted a 7-2 record with a 2.08 ERA, which earned him a spot on the Midwest League All-Star team.8 The popular Campisi was one of the few college graduates on the team, so when manager Ron Plaza missed a game owing to illness, he was tabbed to manage. Later that season, when Cedar Rapids clinched the second-half pennant in the first game of a doubleheader, Campisi’s teammates and Plaza chose him to manage the second game. Campisi spoiled six lineup cards before getting one right and after his nerves settled, he managed the team to a victory.9

In 1967, Campisi was promoted to the Arkansas Travelers in the AA Texas League. Working for manager Vern Rapp, he was used again primarily as a relief pitcher, starting only six of the 46 games in which he appeared. He earned an 11-3 record with a 2.26 ERA.

Campisi continued his progression through the Cardinals’ minor-league system, pitching for manager Warren Spahn and the Tulsa Oilers of the AAA Pacific Coast League in 1968. Campisi split duties, starting 16 games and appearing in relief in 22 games while compiling a 12-3 record with a 3.78 ERA. At Tulsa, Campisi battled his weight, which was normally around 205 pounds but ballooned to 222 at one point, fueled by a fondness for spaghetti and ravioli. When Spahn and pitching coach Barney Schultz suggested that he lose a few pounds, the self-assured Campisi responded, “Would you rather have a skinny loser or a fat winner?”10 Campisi kept his weight and kept on winning.

Tulsa moved to the AAA American Association the following year. Campisi again solidified Spahn’s bullpen with a 13-2 record and a 1.99 ERA. He credited Spahn with instilling confidence in him. In turn, Spahn said, “He has been magnificent. All he does is win.”11 Indeed, Campisi demonstrated remarkable minor-league success, compiling a 58-20 record over his first six professional seasons. Thus, on August 3, 1969, eight days short of his 27th birthday, the Cardinals rewarded him with a call-up to the big club.

Pitching under manager Red Schoendienst, he made his major-league debut on August 15, 1969. Campisi pitched two-thirds of an inning in relief of starting pitcher Nelson Briles. Campisi did not give up a hit, but he made two errors – the only errors he committed in his major-league career – and he allowed an inherited runner to score.

On September 18, 1969, Campisi earned his first major-league win, pitching two scoreless innings to close out a game against the Pirates that the Cardinals won in the bottom of the ninth on Vada Pinson’s two-run walk-off homer. It was Pinson’s 2,000th major-league hit.12

For the year, Campisi appeared in seven games with the Cardinals, all in relief, with a 0.93 ERA. That September, his outstanding year at Tulsa was recognized by the American Association, which presented him with the Allie Reynolds Award as the league’s outstanding pitcher.13 He was also named one of two pitchers to the Topps Class AAA – Eastern All-Star team, composed of players from the American Association and International League.14

Campisi was a control pitcher with an easy delivery who took pride in throwing knee-high sliders, sinkers, and an occasional change-up, often leaving batters wondering how he was able to get them out. His slider broke suspiciously like a spitter, and it was that suggested his first name should be “Saliva,” not Salvatore.15 When Campisi was asked about it, he just smiled and said that if the ball got wet, it was just an accident.16

Campisi opened the 1970 season in the St. Louis bullpen. He appeared in 37 games, finishing 15 of them, and earned two victories against two losses with four saves and a 2.92 ERA. He struck out 26 batters but walked 37, an unusual 11 of them intentionally. In August, dealing with an injured back, he was optioned to Tulsa.17 There he appeared in four games with a record of 0-1 with a 6.43 ERA. The Cardinals finished in fourth place that year, as they had in 1969.

After the season was over, Campisi was traded to the Minnesota Twins along with middle infielder Jim Kennedy. The Cardinals received Herman Hill and minor-leaguer Bob Wissler. Just weeks later, Hill died in a drowning accident in Venezuela.

Campisi was called up by the Twins from their AAA Portland team early in 1971. He appeared in six April games for the Twins, with neither a win nor a loss, and a 4.15 ERA. Around that time, he developed arm trouble. In a 2021 interview, Campisi said he just could not get his arm loose and since he was not a bonus baby or one of the team’s highest-paid players, he was left to work his arm out on his own. He thought giving his arm a rest over the winter might help strengthen it, but when his arm seemed dead during spring training in 1972, the Twins released him, and he decided to retire.

During his time with the Cardinals, Campisi played winter ball in Florida, the Dominican Republic, or Venezuela every year. He credited the guidance of long-time Cardinals pitching coach Billy Muffett, who managed him with Licey in the Dominican League, for helping him reach the majors. Campisi also pitched well for Licey in the 1969-70 winter season, which helped him make the Cardinals in 1970.18

Previously, in January 1969, Campisi and Bo Belinsky made headlines in Venezuela when the manager of their Magallanes team, Nap Reyes, released them for not following orders to pitch. Campisi told his side of the story: that he had been complaining of a stiff elbow, and that after pitching batting practice to test his arm, it was still stiff when Reyes called on him to enter the game. Campisi refused, saying, “I couldn’t take a chance on hurting my arm seriously. I have a family to support and bills to pay.” Speaking of Reyes, Belinsky said, “I imagine he’s disgusted because I went to the owner’s office and backed up Campisi.”19

While playing winter ball in St. Petersburg, Florida, Campisi met Dolores Riffle on a blind date set up by teammate Mike Torrez. Sal and Dolores were married on November 25, 1967. After Campisi retired from baseball, he and Dolores made their home in St. Petersburg. Campisi had earned a Bachelor of Science degree in Marketing from LIU, and he joined General Telephone as a senior sales consultant, working there for 20 years. Dolores Campisi died in 2016 after 48 years of marriage. The Campisis had no children.

Sal Campisi summed up his baseball career by saying, “I met a lot of wonderful people and saw places I never would have seen without baseball. I had a short major-league career, but I wouldn’t trade my experiences in baseball for anything in the world.”

Special thanks to Sal Campisi, who provided biographical information in personal conversations with the author on September 13, 2021, October 13, 2021, and November 16 and 27, 2021.

This biography was reviewed by Bill Nowlin and Rory Costello and fact-checked by Kevin Larkin.

In addition to the sources cited in the notes, the author also consulted