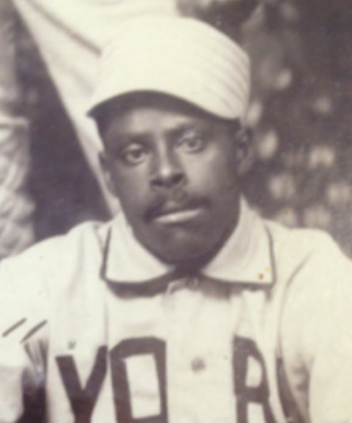 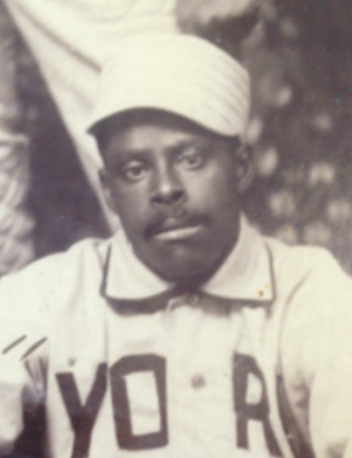 Henry Chadwick, the esteemed “Father of Baseball,” observed William Selden in 1889 and called him “an excellent strategic pitcher.”1 Selden was an ace of the Cuban Giants, a pioneering African-American team. Two years later, he pitched a shutout with President Benjamin Harrison looking on.2 Selden had come a long way since his days as the mascot and bat boy of the 1877 Boston Red Stockings.

William H. Selden was born on October 10, 1866, in Norfolk, Virginia. He was one of 11 children born to Joseph G. and Mary A. (Robinson) Selden.3 Joseph had escaped slavery and helped others to escape through his work as a secret agent for the Underground Railroad.4 In 1863 he enlisted in the Union Navy during the Civil War5 and was stationed at Fort Monroe in Virginia. About 1870 he moved his family to the West End of Boston and was employed as a stevedore at local docks. William attended the Phillips School, one of the first integrated schools in Boston,6 and played baseball on the Ashlands, the best amateur team in the West End.7

The Selden family home at 25 Phillips Street was two miles from the South End Grounds, the home ballpark of the Boston Red Stockings. In August 1877, second baseman George Wright noticed 10-year-old Willie “running about the grounds” and “engaged him to take care of the bats during the progress of a game.”8 In Selden’s first game, on August 17, the Red Stockings defeated the Louisville Grays, 6-1. Wright and his teammates believed Selden was a good luck charm and kept him as the team mascot and bat boy for the remainder of the season. They even had a uniform made for him, like that worn by the players. Through a combination of luck and talent, the Red Stockings won 20 of their final 21 games, all home games, and captured the National League pennant. “Willie felt very proud when the club carried off the championship.”9

An African-American team known as the Boston Resolutes was managed by Selden’s older brother, Alexander, 1885-86.10 The “Selden” who appears in their box scores was probably Alexander. But it was William who pitched for the Resolutes on May 7, 1887, striking out 13 batters in a 10-3 victory over the Falls City team in Louisville. That day he had “a most deceptive drop curve and almost perfect control over the ball.”11 This was the only game played by the Resolutes as a member of the short-lived National Colored League. By June, William was playing for the Cuban Giants.12

In those days, southpaws were not common, and newspapers made note of them. Research for this biography found no mention of Selden being a southpaw, so it is reasonable to assume he was a right-hander. His height and weight are unknown, but he was described as little. According to a military record, his father stood 5-foot-6.

As a 21-year-old on the Cuban Giants, Selden pitched ineffectively in exhibition games against major league teams. In seven innings on October 20, 1887, he gave up 17 runs to the Indianapolis Hoosiers of the National League. Three days later, he was “hammered unmercifully” by the Cincinnati Reds, surrendering 18 runs in six innings.13 On April 18, 1888, he allowed 13 runs in eight innings to the Washington Nationals, a team with a catcher named Connie Mack. But Selden was “very effective with some of the men, striking out eight” Washington batters.14 The 1888 Cuban Giants were not part of any league, yet they played 154 games, achieving a 121-31 record with two ties.15 They rarely played a major league team while touring Eastern states playing white semipro, college, and minor league teams.

The following year, the Cuban Giants joined the Middle States League, an integrated minor league, and played home games in Trenton, New Jersey. There were 13 teams in the league, but not at the same time. Six started the season and seven joined later, but nine of the 13 disbanded along the way, leaving only four at the end.16 The Cuban Giants and Harrisburg Ponies were the only teams to play the entire season, and both claimed to have won the pennant.

Selden pitched at least five shutouts for the 1889 Cuban Giants: in May, a pair of four-hitters against Lancaster and a two-hitter against the Philadelphia Giants; a four-hitter against York on June 3; and a one-hitter against Norristown on the Fourth of July.17 In a 10-4 victory over the Lebanon Grays on August 16, he allowed six hits, and batting in the seventh inning, he “sent the ball to the woods for a triple.”18 It is not known whether he was a left- or right-handed batter. On days when he was not pitching, he played in the outfield. Against Reading on May 23, he performed brilliantly in left field, making five catches.19

In 1890 Selden joined a newly formed African-American team, the York Monarchs, in the integrated Eastern Interstate League (all six teams were based in Pennsylvania). Selden threw a two-hit shutout in York’s 25-0 thrashing of Easton on May 20 and a six-hit shutout of Altoona on June 3.20 In these two games, York second baseman Sol White, a future Hall of Famer, handled 18 chances without error. When York defeated Lebanon, 12-3, on June 11, “Little Selden was at his best and his delivery completely mystified the Lebanon players.”21 On July 16, he played left field as York edged Lebanon, 5-4, in 11 innings; his seven putouts included “five long running catches.”22 When the season ended a week later, York was in first place with a 40-16 record.23 In 192 innings pitched, Selden compiled a 15-6 record, and his .330 batting average was among the league leaders.

After the 1890 season, Selden played for African-American teams that were not part of any league. Pitching for a team known as the Gorhams, he threw a four-hit shutout against Norristown on June 16, 1891.24 Among his teammates were Sol White at second base and Frank Grant, another future Hall of Famer, at shortstop.

At Cape May, New Jersey, in the summer of 1891, Selden and the Gorhams defeated the local semipro team on July 27 and again on August 15.25 In the first game, he pitched a five-hitter in a 7-1 victory. And in the second contest, with President Benjamin Harrison in attendance, he hurled a six-hit shutout. Harrison, an avid baseball fan, had a cottage in the seaside community.26

In the Gorhams’ 14-2 victory on Labor Day, September 7, Selden’s “swift down shoots” puzzled “the heavy hitters” of a Port Chester, New York, team.27 At the Polo Grounds on October 10, he was competitive yet lost, 6-4, in an exhibition game against the New York Giants.28 In a rematch on April 6, 1892, he pitched in relief as the Giants crushed the Gorhams, 36-1.29

On May 16, 1892, Selden went the distance in a 16-inning marathon, allowing nine hits, one walk, and no earned runs in an 8-6 victory over Reading, Pennsylvania.30 On May 31, he hit a home run but gave up 13 hits in losing to Camden, New Jersey, 8-6. The home run was described as “little Selden with a big bat corking the ball away over [the] left field fence.”31

He pitched well in a seven-inning exhibition game against the Cincinnati Reds on June 24, 1897, though the Reds defeated the X-Giants, 3-1. “There are four or five players” on the X-Giants “who, but for the color line, would be filling positions in major league teams,” said the Cincinnati Enquirer.34 Nine days later, he was a “pitching wonder” in delivering a three-hitter against Marion, Ohio. “He had perfect control, splendid speed and deceiving curves and shoots.”35 Playing in right field at Chester, Pennsylvania, on September 28, 1899, Selden “fell and broke his left leg” “while running for a fly ball.”36 He played briefly for the X-Giants in the spring of 1900 before calling it quits.

Little is known about Selden’s life after baseball. Perhaps he worked in entertainment for a time; he had been a vaudeville singer in the winter of 1897-98.37 Census records show that he was a single man living in Boston, working as a hotel waiter in 1910 and as a laborer at a Navy yard in 1920. According to Seamheads.com, he died in Boston on August 26, 1926, at the age of 59 and was interred at Boston’s Mount Hope Cemetery.

This biography was reviewed by Paul Proia and Norman Macht and fact-checked by Alan Cohen.

Photo: William Selden in the uniform of the 1890 York (Pennsylvania) Monarchs.