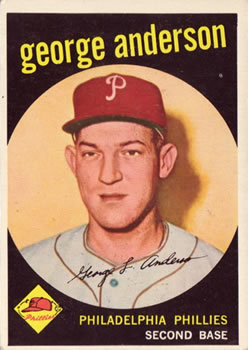 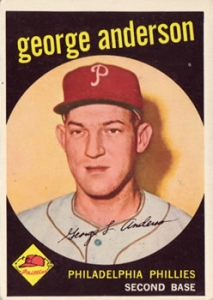 On December 23, 1958, the Philadelphia Phillies, after finishing last in the eight-team National League, made a trade to fill a pressing need at second base. The Phillies sent three players (Jim Golden, Rip Repulski, and Gene Snyder) to the Los Angeles Dodgers for Sparky Anderson, a 25-year-old who had spent the last six seasons in the Dodgers’ minor-league system.

“I’ve been working on this one since the season ended,” said Phillies’ general manager Roy Hamey. “Anderson is the best available second baseman in the minors who is ready for the majors. He’s definitely a Eddie] Stanky-type, he’s a take charge guy.”1

Anderson had just 12 hits in 80 at-bats (.150 average) during spring training, but Phillies manager Eddie Sawyer said, “I’m really not too worried about him. … I know he’s going to hit enough to hold the job. He does everything else so well. … In the field, there’s no question about it. He’s the best we’ve had in a long time. He can make all the plays.” The Sporting News predicted that Anderson would be the NL’s 1959 Rookie of the Year.2

Anderson would make his major-league debut against the team he went on to manage 11 years later. The Cincinnati Reds, per long-standing custom, opened the 1959 NL season at home on April 9 with a win against the Pirates, then traveled to Philadelphia for the Phillies’ opener a day later. The Friday night game featured two of the decade’s dominant right-handed pitchers, with Cincinnati’s Don Newcombe opposing Robin Roberts, who was making his 10th straight Opening Day start for the Phillies.3

It started raining at 5:30 and the tarp did not come off the field until 10 minutes before game time, preventing the teams from taking batting or infield practice. With the temperature in the 40s, conditions were less than ideal for the players and the 22,189 spectators.6

The weather did not hinder either pitcher; both starters were near-perfect through five innings. Leading off the home half of the first, Anderson lined out to second in his first big league at-bat. Newcombe followed by walking Richie Ashburn on a 3-and-2 pitch, then fielded Ed Bouchee’s comebacker and threw to second to start an inning-ending double play.

After that minor blemish, Newcombe set the Phillies down in order in each of the next four innings. Ashburn lined a drive directly at Reds right fielder Gus Bell for the second out in the fourth, the only ball hit hard off Newcombe through five frames.7

Roberts did not allow any of the Reds to reach base until the fifth. With one out and the count 1-and-2, his next pitch nicked Frank Thomas on the arm.8 A force out and a groundout followed to end the inning. Roberts lost his no-hit bit when Newcombe lined a single between short and third with one out in the sixth, but he retired the next two batters to keep the shutout going.9

Leading off the Philadelphia sixth, Chico Fernandez grounded a single up the middle for the Phillies’ first hit. Jim Hegan’s sacrifice moved the runner to second. Roberts lined a 3-and-2 pitch to right-center for a double, driving in Fernandez.10 A fly out and a groundout followed, ending the inning with the Phillies up 1-0.

Each team was retired in order in the seventh. With two outs in the top of the eighth, Roy McMillan lined a double off the left-field wall. Bouchee grabbed Newcombe’s grounder down the line behind first base and tossed to Roberts, covering the bag, to end Cincinnati’s scoring threat.11

In the bottom of the eighth, Fernandez walked with one out and advanced to second on Hegan’s single to left. Roberts’ slow roller to the first baseman forced Hegan at second and sent Fernandez to third base. With runners at first and third, Anderson — hitless in his first three at-bats — took a ball and fouled off a pitch before lining a single to left, giving Philadelphia an insurance run.12

With the score now 2-0 in favor of the Phillies and Roberts three outs from victory, Johnny Temple led off the top of the ninth with a single. Vada Pinson hit a one-hopper back to the mound.13 Roberts threw to McMillan covering second, and the shortstop’s relay to first beat the speedy Pinson for a double play. “That’s the only way anyone’s going to double him all year,” said Roberts after the game.14

Needing only to retire Bell to complete the shutout, Roberts gave up a fly to deep right. “I jumped and the ball landed in my glove at the same time my glove hit the wall,” right fielder Bob Bowman said after the game. “I had nothing to give and the ball bounced out.”15 Bell was credited with a double.

Frank Robinson walked on a 3-and-2 pitch. Thomas singled to left, scoring Bell, breaking the shutout, and cutting Cincinnati’s deficit to one run, 2-1. Robinson, the potential tying run, was held at second on the play. Jerry Lynch hit the first pitch offered by Roberts. Bouchee knocked down the high grounder with his glove and tossed to Roberts at first base, securing the win for the Phillies.16

“Two high fastballs,” said Newcombe, referring to the double hit by Roberts in the sixth and the single by Anderson in the eighth. “That was the ballgame. I threw harder than I have all spring. I felt I was getting stronger at the end.”17

“If Newk pitches like that all season, I’ll guarantee him 20 victories,” added his catcher, Ed Bailey.18

“That was quite a ballgame,” Philadelphia manager Eddie Sawyer said. “Robbie was just great, and we played real good ball behind him. In fact, both teams played well. That usually happens when you have two pitchers like that out there”19

“Gee, I just felt great,” Roberts said. “I had good stuff all the way. The only thing I didn’t like was that walk I gave to Robinson in the ninth. I really didn’t want him on there with us just two runs ahead.”20

“I hit that ball in the first inning pretty good, but I didn’t get out in front of it. On the last one I did, and boy, it felt mighty good,” said Anderson of his eighth-inning single that drove in the winning run. “We just had to win that one, the way Robbie was going.”21

Anderson appeared in 152 games, including 145 starts at second base, and posted a .218 batting average for the Phillies, who finished last for the second consecutive year. Of his 104 hits, only 12 were for extra bases (nine doubles and three triples). His Opening Day RBI was the first of just 34 runs he drove in during the year.

Anderson never played in another major-league game after 1959. He spent the next four seasons in the minor leagues at the Triple-A level with the Toronto Maple Leafs of the International League, retiring as a player after the 1963 season. Anderson managed in the minor leagues for five years before returning to the big leagues as a coach for the expansion San Diego Padres in 1969. On October 9, 1969, he was introduced as the new manager of the Cincinnati Reds.22

5 Bill Ford, “Phillies Good Bet to Finish Last.” Roberts and Newcombe faced each other on Opening Day three times while Newcombe was with the Dodgers. Roberts was the winning pitcher in 1950 and 1956, with Newcombe taking the loss both years. In 1957 Roberts was the loser in a 12 inning, 7-6 Dodger win, a no-decision for Newcombe, who was relieved after seven innings.

8 Allen Lewis, “Roberts Hurls, Bats Phils to 2-1 Victory.” Thomas had come to Cincinnati in a six-player deal with the Pittsburgh Pirates before the season.

20 “Robbie Just Pitched the Same as He Felt.”