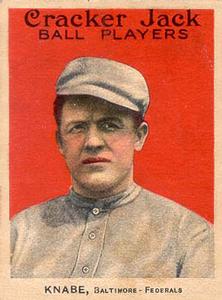 It was the biggest sports news in Baltimore since the American League’s Orioles, doomed from the start, left for New York after the 1902 season: Big-league baseball was back in town!1

Of course, whether the baseball in question was actually “big league” by today’s standards is subject to fair debate.2 Although Major League Baseball officially recognizes the Federal League as a major league, many baseball researchers are somewhat less generous in their assessment. Nevertheless, when the Baltimore Terrapins set up shop at their new ballpark at the corner of York Road and 29th Street on the morning of April 13, 1914,3 nobody in Baltimore argued that the brand of baseball they were about to undertake wasn’t “big league” — least of all the “nearly 28,000 persons” who showed up for the game that day.4 “If you still doubt the major part of the baseball watch the crowds that pack themselves this afternoon into every available inch of space in Terrapin Park,” commented one Baltimore newspaper.5

The city was still smarting from the loss of their Orioles a scant dozen years before. They regarded the absence of a major-league club as a travesty. After all, Baltimore was the eighth-largest city in the country at the time, more populous than Pittsburgh, Cincinnati, or neighboring Washington, big-league cities all. Furthermore, the people of Baltimore felt they had as much a claim to baseball glory as any other city in the country but had been unjustly tracked into minor leaguedom.

Well, no more: Big-league baseball was back in town!

The Federal League’s claim to major-league status was new, if not spurious. Rising from the ashes of the United States League’s collapse into a financial heap early in the 1912 season, it rechristened itself first the Columbian League, then the Federal League in time for a 1913 season conducted as an “outlaw league.” The six-team loop played a 120-game schedule to respectably moderate success, which served only to slake their thirst to become much bigger.

After a series of closed-door meetings among financial backers, the league expanded to eight teams, made the crucial decision to move into major Eastern cities, built six new ballparks to then-big-league standards, and, most importantly, lured a good deal of talent from the two established major leagues to play alongside top minor-league and college players. By April of 1914, it was ready to launch as a self-proclaimed third major league.6

And so it did, on the 13th of the month, opening with a single game pitting the Buffalo team, known as the Buffeds, against the Baltimore Terrapins. The gala day began with hopeful cranks already gathered at the entrance of the ballpark by 6:00 A.M., lunches in hand.7 Later in the morning, a parade to the park launched from the Emerson Hotel, where both teams were housed. More than 10,000 people blocked the square at Calvert and Baltimore Streets, where traffic police were powerless to disperse them.8

“Under a sky and sun that could not [have been] better made to order,” Terrapin Park gates opened at 11:00 A.M. with 8,000 people standing in line for a chance to buy bleacher seats, as all reserved seats had already been sold in advance.9 By noon the 3,000-seat bleachers were packed to capacity behind ropes stretching across the outfield to hold in additional overflow crowd. Reserve-ticket holders started showing up about 1:30 P.M., and by 2:00 P.M. all of those 20,000 seats were also filled. Banks of chairs were placed in front of the stands on the field; they sold out as well. Beyond the ballpark, for a block in each direction, housetops were well-covered with spectators. Stands were erected outside the park and filled two hours before game time. There were even some fans perched on a church steeple nearby.10

The Buffeds roster of 22 marched onto the field at 1:30 P.M. for practice and were cheered for five minutes. Meanwhile, bands played “merry tunes and marched about the park.” When the hometown Terrapins started their practice, it was discovered that the outfield fences, particularly left field, were too close. The first practice ball hit landed smack in the middle of the band playing in the outfield. Many more were hit into the crowds in center and right.11

As game time drew near, the teams, led by a marching band, paraded to the flagpole in center field, where the two managers, Buffalo’s Larry Schlafly and Baltimore’s Otto Knabe, unfurled Old Glory.12 The flag was raised up the pole to the strains of the state song, “Maryland, My Maryland.” The band also played “America,” “The Star Spangled Banner,” and “Dixie” during this ceremony.13

At 2:45 P.M. “Governor Goldsborough threw out the first ball to Mayor Preston, who muffed it, probably as an example to his home team of how not to do it.”14 The mayor then presented the ball to the umpires, a roar went up from the crowd, the home team took their positions, and the game, the season, and the league prepared to commence.15

The Baltimore starter was big-league veteran Jack Quinn — who was, as it happened, the subject of a lawsuit filed in New York that morning by the Boston National League Club, attempting to enjoin him from jumping his contract to play for the Terrapins.16 Legal maneuverings notwithstanding, at 3:10 P.M., Quinn’s first pitch “whirled through 60 odd feet of space and landed with a pleasing thud in the catcher’s mit [sic].” The umpire signaled strike, “whereat 28,000 fans of the baseball denomination let loose a shout that promised to give tremors to any seismographic instrument within 100 miles of Baltimore.”17

Cheers gave way to groans as the Buffed leadoff hitter, ex-Oriole Homerun Charlie Hanford, ripped Quinn’s second pitch for a single into right field to launch the enterprise. Hanford moved to third base on two subsequent groundouts but was stranded there.18

Facing off against Buffalo starter Earl Moore in the Terrapins’ half of the first, Knabe laced a one-out double into the crowd in center field and took third on a groundout to second. Cleanup hitter Hack Simmons whiffed on three straight pitches, though, and that was that.

Each team continued running in place in the second inning. Frank Delahanty, the youngest of the five big-league brothers, led off with a single to right. After being sacrificed to second, he was thrown out at third trying to advance on an errant pitch. Joe Agler then walked but was caught stealing to end the inning.

Harry Swacina staked the Terrapins to a leadoff runner in the bottom half of the frame with a single just past second base. After advancing to second on a groundout to short and watching Mickey Doolin fly out to short right, Swacina advanced to third as Fred Jacklitsch’s groundball was bobbled by Buffed shortstop Baldy Louden for an error. With Quinn up and two outs, Jacklitsch took off to steal second and as catcher Walter Blair threw to the base, Swacina sprinted toward home. Second baseman Tom Downey, anticipating the double steal, cut off the throw and returned the ball to Blair to nail Swacina at the plate by several feet, closing out the inning.

Each team went one-two-three in an uneventful third inning, and although Buffalo’s Luther Bonin took second on a wild pitch after reaching base on an error by second baseman Knabe with two outs in the fourth, he was stranded there when Delahanty struck out. In the bottom of the inning, Guy Zinn crushed a double into the right-field crowd. Simmons sent Zinn to third with a deep fly out. Zinn scored on Swacina’s double into the left-field crowd; Delahanty just missed making a jumping catch before landing on and falling over an overflow spectator’s chair.

After Swacina moved to third on a towering fly to right by Jimmy Walsh, Doolin drew a walk and stole second. Jacklitsch slashed a double into the center-field crowd to score the two runners. Quinn popped to third to end the inning, but he couldn’t have felt too bad about that, since he now had a three-run lead to work with.

As it turned out, Quinn would need that whole lead. After retiring the first two batters on groundouts to second to start the fifth inning, Quinn surrendered a Blair single past shortstop. Del Young, pinch-hitting for pitcher Moore, lifted a fly ball that left fielder Simmons dropped, putting runners on second and third. Hanford hit a double into the center-field crowd to score the runners and draw the Buffeds to within one run. Downey flied to right field, though, and that was the end of the inning and, as it turned out, the scoring for the game.

Even without additional scoring, there continued to be a lot of activity for the fans at Terrapin Park. Gene Krapp, who relieved Moore to start the fifth, plunked Zinn in the back but otherwise got out of the inning unscathed. After Buffalo went down one-two-three in the sixth, Baltimore loaded the bases with no outs in their half, but Jacklitsch struck out and Quinn bunted into a pitcher-to-catcher-to-first double play.

In the seventh inning, Buffalo got a runner to first and that was it, while Baltimore’s Benny Meyer doubled to lead off and took third on a botched pickoff throw with Knabe at the plate but stood there and watched Krapp squeeze himself out of a tight hole by retiring the next three batters.

The Buffeds put their first two runners on base via errors in the top of the eighth inning, then made three straight outs to waste that opportunity, while in the bottom half first baseman Agler’s error put the Terrapins’ Walsh at second base, where he too had an on-base view of three straight outs by his own teammates.

Buffalo had one last shot at tying the game in the ninth inning, when Agler singled to short left with one out, but he was caught stealing. When Blair grounded up the first-base line, “Swacina, wearing that smile that wouldn’t come off, picked up the ball, touched first base, and ran for the clubhouse. That ball will be prized for many a’day.”19

The sloppy play on both sides would do nothing to disabuse contemporary baseball researchers of the notion that the level of play in the Federal League was high minor league at best. In addition to the high number of caught-stealings and failed attempts to advance errant pitches, the teams made eight errors between them.

Despite the messy Opening Day performance, each team finished 1914 in the Federal League’s first division, with Baltimore in third place and Buffalo in fourth. The Federal League lasted one more season before folding, eventually launching the lawsuit that led to the establishment in 1922 of the major leagues’ exemption from the Sherman Antitrust Act that survives to this day.20

4 “Glorious Inaugural for the Terrapins,” Baltimore Sun, April 14, 1914: 1. The exact count listed within the article was “27,692 Baltimoreans and Marylanders.”

18 All play-by-play accounts were cobbled together from two newspaper stories: “Terrapins Take Opener from Buffeds 3 to 2”; and “Quinn Hero of Day,” Baltimore Sun, April 14,1914: 7.