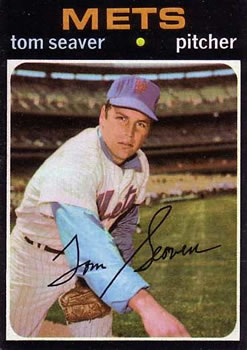 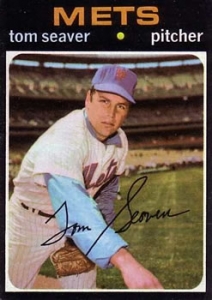 Pirates are swashbuckling types, commanding submission from those they conquer.

On April 16, 1971, however, their baseball namesake from Western Pennsylvania suffered a reversal of this paradigm in an effort that proved as ineffective as a clipper with no sails – 14 strikeouts against ace Tom Seaver in 1971’s first matchup between the defending National League East champion Pittsburgh Pirates and the team they overthrew from the division’s perch, the New York Mets.

Pittsburgh managed only three hits against Seaver. Al Oliver tallied two of them.

New York’s squad compiled eight hits in the 1-0 win at Shea Stadium. A solo home run clouted by Donn Clendenon against former teammate Dock Ellis in the bottom of the fourth inning gave the home team its slim margin of victory. The bash, over the Pirates’ bullpen abutting left field, was the first of 11 round-trippers for Clendenon in ’71, his next to last season in the majors.1

Roberto Clemente was Seaver’s first “K” of the game, ending the top of the first inning; Pittsburgh’s exemplary slugger struck out three times against the Mets ace.

The Mets pounced early, getting two of their eight hits in the bottom of the first. But they failed to further the opportunity presented by Tommie Agee’s leadoff single and Bud Harrelson following suit off Ellis. With Mets on first and second and no outs, Ellis retired Cleon Jones on a fly ball and Clendenon on a strikeout; shortstop Jackie Hernández fielded Ken Singleton’s grounder and flipped it to Dave Cash to force Harrelson out at second.

Oliver singled for the Pirates’ first hit in the second, but Willie Stargell and Bob Robertson, added two more whiffs to Seaver’s total.

An inning later, Seaver gave up Pittsburgh’s second hit when Cash banged a single. But he also raised his strikeout total to six by fanning Hernandez, Ellis, and Richie Hebner.

Pirates backstop Manny Sanguillen led off the top of the eighth with a strikeout; Milt May pinch-hit for Ellis, becoming the 12th “K” for Seaver.

Cash and Clemente were caught looking in the top of the ninth for strikeouts number 13 and 14. It was Seaver’s highest strikeout total since fanning 15 Philadelphia Phillies in a one-hit shutout the previous May.

As he extended his string of scoreless innings to 20, Seaver’s performance was a triumph of brutal efficiency. The Pittsburgh Press reported that he threw 115 pitches, 81 of them for strikes.2 Red Foley of the New York Daily News pointed out that Pittsburgh pushed Seaver to a full count only three times. There were no walks.3

Before taking the mound, Seaver did not feel optimal. His revelation after the game contravened an outstanding performance underscoring his template of brilliance. “I didn’t think I had good stuff after warming up in the bull pen,” revealed the right-hander. “I felt herky-jerky. But I threw three pitches from the mound and knew I was wrong about myself. Now I’m pitching as well as I ever did.”4

The weather was far from baseball-like – below 50 degrees with a lack of sunlight and a “crisp wind” reinforcing the miserable playing conditions. Stargell joked of Seaver that it didn’t matter to the hurler: “He had enough smoke to start a forest fire.”5

“It is tough to hit Seaver even on a good day,” explained Clemente. “It is tougher when it is cold and windy, like it was today.”6

Clendenon struck out twice and had a single in the bottom of the eighth in addition to the home run. But the 1969 World Series MVP offered that he might have done better than his 2-for-4 day. His second strikeout happened in the plate appearance following his home run, in the sixth with Harrelson and Jones on first and second.

“I did not control my anxiety; I was too eager,” said Clendenon, a Pirate from 1961 through 1968. “If you are a hitter you hit with men on base, you don’t hit home runs. Seaver pitched a great game and I’m glad I contributed to it. But I wish I had been more professional. Let’s face it; I have a problem.”7

The home run broke Clendenon out of an 0-for-10 slump.8 He had begun the ’71 season with a 2-for-3 performance in the Mets’ Opening Day 4-2 victory against the Expos, scoring once and notching an RBI.

In the next two games of the April series against Pittsburgh, Clendenon did not get a hit. He sat out the fourth and final game; he ended ’71 with a .247 average.

Seaver’s April 16 game exemplified his stature as one of baseball’s outstanding pitchers of the late 1960 and early 1970s. When he finished the ’71 season, Seaver owned a 20-10 record, helped by his 289 strikeouts to lead the National League and a 1.76 ERA topping the majors.

He had been a key factor for the Mets compiling a 100-62 record in 1969, then winning the NL flag against the Atlanta Braves and registering an upset in the World Series against the Baltimore Orioles. The 1969 season was the first of three Cy Young Award-winning campaigns for the fireballer, the others coming in 1973 and 1975.

Overpowering a lineup with 14 strikeouts is an outstanding feat, even more so when factoring Pittsburgh’s mighty offense. “If one or two of them start to hit, it generally snowballs,” acknowledged Seaver. “Then it seems everybody hits.”9

Clemente hit .341 in 1971, the fourth-highest batting average in the major leagues that season. Sanguillen placed eighth at .319; Stargell neared the .300 barrier. His power spurred him to lead the major leagues with 48 home runs. With great swings often come great misses – he led the NL with 154 strikeouts. Cash batted .289.

Limiting the NL East rivals to one run reflected Ellis’s command, but Seaver’s performance got the spotlight. Ellis struck out six over seven innings and gave up six hits; Nelson Briles and Bob Veale pitched in relief. Bill Virdon, taking over managerial duties from the flu-ridden Danny Murtaugh, called on Briles, a righty, to start the bottom of the eighth. He retired Harrelson on a grounder, then gave up back-to-back singles to Jones and Clendendon, which put Met runners on first and third.

First baseman Robertson gloved Singleton’s groundball and nailed Jones at home for the second out. Murtaugh then relied on southpaw Veale, who struck out Ken Boswell for the seventh Met “K.”

Ellis had an otherwise glorious year, finishing ’71 with a 19-9 record and starting the All-Star Game for the NL.

Mets pitching contained the Pirates for the rest of the four-game weekend series. A day after Seaver’s gem, Stargell’s two-run homer off Jerry Koosman provided a 2-0 Pittsburgh win. In the first game of the series-capping doubleheader on April 18, Clemente’s sixth-inning triple was the only hit for the visitors in Gary Gentry’s complete-game win. The Pirates eked out a 2-1 win in the second game of the twin bill, giving them a total of six runs in four games at Shea Stadium.

Pittsburgh rebounded from its early-season struggles to take the NL East again with a 97-65 record; the Mets were in fourth place, 14 games back. The Pirates then beat the San Francisco Giants in the NLCS and topped Baltimore in seven games to win the 1971 World Series.