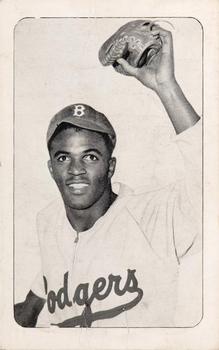 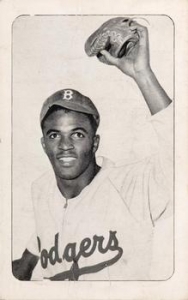 During his 10-year career in the National League, Jackie Robinson got 1,518 hits in 1,382 games. His first safety came on April 17, 1947, against the Boston Braves at Ebbets Field in the second game of his career. Baseball’s first African-American player in the twentieth century had made his debut two days earlier, on Opening Day against the Braves, and went hitless in three at-bats. The first baseman also reached on an error and scored a run.

Dodgers interim manager Clyde Sukeforth (appointed after Leo Durocher was suspended for conduct detrimental to baseball, and replaced after this game by Burt Shotton), sent veteran right-hander Kirby Higbe to the mound to face the Braves, who had finished in fourth place in 1946. Boston manager Billy Southworth’s choice to start was right-hander Mort Cooper.

Leading off the game for Boston before the crowd of 10,252 at Ebbets Field was Braves shortstop Dick Culler, who grounded out to Spider Jorgensen at third base. Johnny Hopp singled but was left stranded after Bama Rowell grounded out and  Bob Elliott struck out.

Brooklyn scored three times in the bottom of the first. Eddie Stanky, known for his keen eye at the plate, walked. Robinson flied out to center fielder Hopp. A single by Pete Reiser sent Stanky to third base, and he scored on a groundout by Dixie Walker that sent Reiser to second base. Gene Hermanski reached on an error by first baseman Earl Torgeson that sent Reiser across the plate with the Dodgers’ second run. Brooklyn catcher Bruce Edwards singled to send Hermanski to third base, and Hermanski scored on an error by Culler.

Higbe struck out Tommy Neill leading off the second, but the next three Braves reached base. Torgeson walked, Phil Masi doubled, sending Torgeson to third, and Connie Ryan’s single scored both baserunners. Ryan took second of Cooper’s sacrifice, and Culler walked, but Hopp struck out swinging to end the inning with the Dodgers ahead, 3-2.

The Dodgers enjoyed another big inning in the second. Robinson got a four-pitch walk with one out. Reiser’s single sent Robinson to third base and another walk, to Walker, loaded the bases with Hermanski coming to the plate. The Dodgers left fielder sent a fly ball to deep right field that scored Robinson, and a single by Edwards scored Reiser. Jorgensen drove in two runs with a double. The hit knocked Cooper out of the game; he was replaced on the mound by Andy Karl, who got Pee Wee Reese to ground out and end the inning.

In the bottom of the fourth, with Glenn Elliott now pitching for the Braves, Reiser singled, Dixie Walker walked, and with two outs, Jorgensen hit a three-run home run to put the Dodgers ahead 10-2.

Still in search of his first major-league hit, Robinson faced Elliott with one out in the fifth inning. He bunted the first pitch down the third-base line and beat it out for a single. He went to second on a groundout by Reiser but was left stranded base when Walker grounded out to Culler, the Braves shortstop. Sportswriter Dick Young called Robinson’s first hit a “strong one-bounce bunt” that “took (a) twisting bounce off Elliott’s bare hand as Bob charged in. When official scorer Lee Scott flashed ‘H’ sign on (the) scoreboard, (the) crowd cheered.”1 Harold C. Burr in the Brooklyn Eagle wrote that “the ball skidded away from the Braves’ third baseman, but was a legitimate hit all the way.” He added, “The negro isn’t exactly wearing the ball out, but he’s still under heavy pressure.”2

Boston rallied in the sixth inning when Ryan followed Masi’s single with a double that sent Masi to third base. Pinch-hitting for Elliott, Tommy Holmes was walked intentionally. Mike McCormick, batting for Culler, spoiled the strategy with a single scoring Masi and Ryan. Hopp doubled Holmes and McCormick home, and Brooklyn’s lead was down to 10-6.

Duke Snider made his major-league debut in the Dodgers’ half of the sixth. The top prospect and future Hall of Famer pinch-hit for Tommy Tatum. Facing new Boston pitcher Si Johnson,

It was just Jorgensen’s second game in the majors. Like Robinson, the third baseman had made his debut two days earlier in the Opening Day win over Boston. The year before, he was Robinson’s teammate with the Montreal Royals of the International League and batted .293 with 5 home runs and 71 RBIs. The 5-foot-9-inch Jorgensen, from Folsom, California, weighed just 155 pounds, but New York Daily News writer Dick Young wrote that “(h)is scrawny frame is misleading.”3 Young commented on the 26-year-old Jorgensen’s “drawn cheeks” that “make you want to hand him a buck for meal,” but added, “(S)omewhere in his bony body, he packs plenty of power.”4 Jorgensen earned a late promotion to the Dodgers out of spring training and, according to the Brooklyn Eagle, “reported in such a hurry to the Dodgers opening day that he had to borrow a pair of baseball shoes, before he could go to third base.”5

Harry Taylor’s seventh inning was eventful, to say the least. It involved a single, two walks, and a wild pitch, but no runs. Sukeforth called on reliever Hugh Casey after Taylor walked Nanny Fernandez, putting runners at first and third with one out. Casey struck out Sibbi Sisti and retired Hopp on a groundout to second base. After that, the game turned relatively quiet. Only Robinson reached base for Brooklyn in the last two innings, on a walk to lead off the seventh.

Boston loaded the bases with nobody out in the eighth inning, but Casey struck out Torgeson and got Sisti to hit into a double play. Casey walked Ryan to open the ninth, but Boston could not get a rally started.

According to the Boston Globe, “Neither Morton Cooper nor Kirby Higbe, from whom good pitching was anticipated, survived the pounding today in a ‘marathon’ ballgame, in which the Durocherless Dodgers beat the Braves, 12-6.”6 The Braves used 18 players, the Dodgers 14. The Eagle’s Burr commented, “It was one of those games with pitchers wild and practically everybody except the ushers getting into one line-up or the other.”7 In a separate article, Burr wrote of the Brooklyn first baseman: “The jury is still out on Jackie Robinson.”8

If so, the jury was not out for much longer. Robinson picked up eight hits over his next four games and 175 in his rookie season. He batted .297 with a .383 on-base percentage and won the first-ever Rookie of the Year award.