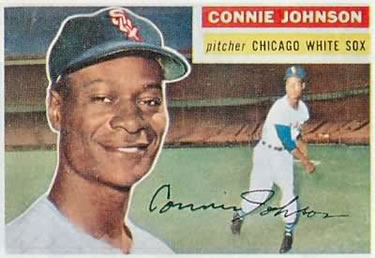 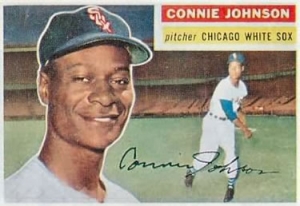 Connie Johnson, at age 30, joined the Chicago White Sox in the spring of 1953. He was no stranger to Chicago’s Comiskey Park; he had pitched there in his days with the Kansas City Monarchs. His most recent appearance at Comiskey was the 1950 East-West Game, a Negro League All-Star Game featuring the best Black players remaining in a league depleted by the early years of major-league integration. On August 20, 1950, he pitched the middle three innings, earning the win as the West defeated the East, 5-3.

Attendance for the 1950 East-West Game was 24,614. Far fewer came through the turnstiles on the afternoon of April 17, 1953, to watch the White Sox face the St. Louis Browns, in what turned out to be Johnson’s first game back at Comiskey Park. Relatively few members of the announced crowd of 972 were around when Johnson entered the game in relief in the eighth inning for his first appearance in an American League game.

For the third game of the season, Chicago hosted the Browns in the conclusion of a two-game set. The teams came into the game with identical 1-1 records. On a cold and dreary April afternoon, with the temperature at 36 degrees, the starting pitchers were lefty Dick Littlefield for the Browns and 36-year-old Joe Dobson for the White Sox. Neither would be around at the game’s end, as the Browns beat the White Sox, 6-4.

There was no scoring in the first four innings. Chicago’s Dobson faced the minimum of 12 batters; the two batters who reached base via singles were erased on a double play and an unsuccessful steal attempt. Littlefield also faced the minimum in his first three innings; the three White Sox who singled off him were erased by two double plays and a failed steal attempt.

The White Sox mounted a fourth-inning rally. Nellie Fox opened things up by beating out a bunt for a single. His attempted steal of second appeared to be thwarted, but Browns second baseman Billy Hunter dropped the throw from catcher Les Moss for an error. Fox moved to third when right fielder Vic Wertz dropped Ferris Fain’s fly ball. Chicago had runners on the corners and none out, but Littlefield kept the White Sox off the board by retiring Minnie Miñoso, Vern Stephens, and Jim Rivera.

The Browns took a 1-0 lead in the top of the fifth on Wertz’s homer to right. They threatened to add to the lead, but catcher Red Wilson gunned down Hunter at second base to end the half-inning.

The White Sox tied things up in their half of the inning. Singles by Sam Mele and Chico Carrasquel put runners on first and second. Wilson’s sacrifice moved them up, and Dobson helped his cause with a fly ball to center field, scoring Mele with the tying run.

After a scoreless sixth inning, the Browns batted around and scored five runs in the seventh inning, building a lead that proved insurmountable. Dobson walked Jim Dyck to start things off and Dyck advanced to third on Wertz’s single. Bob Elliott’s fly ball to left field scored Dyck with the go-ahead run, and Wertz took second on the throw.

Roy Sievers singled and runners were at the corners. Dobson’s day was over, and Harry “Fritz” Dorish came on in relief. Dorish proved ineffective. Moss greeted the reliever with a double, scoring both runners for a 4-1 St. Louis lead; he took third on the throw home.

An intentional pass was given to Hunter, and Littlefield came to the plate. His grounder to Fox forced Hunter at second, with Moss scoring the fourth run of the inning. Johnny Groth’s grounder to shortstop Carrasquel should have ended the inning, but he bobbled the ball. With runners on first and second, Bobby Young singled to right field, scoring Littlefield with the Browns’ final tally of the day.

The White Sox rallied in their half of the seventh, as singles by Rivera, Carrasquel, and Wilson narrowed the Browns’ lead to 6-2. Then, with one out and runners on first and second, White Sox manager Paul Richards sent up Rocky Krsnich to bat for Dorish. 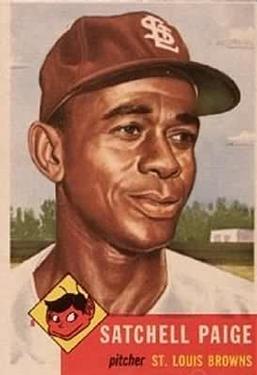 St. Louis manager Marty Marion made a move of his own, bringing in Satchel Paige to replace Littlefield. Paige’s first appearances at Comiskey Park were during his days in the Negro Leagues. In the 1934 East-West Game – 19 years before this game – he hurled the final four innings and was the winning pitcher as the East beat the West, 1-0. Paige appeared in five East-West games before joining the Cleveland Indians in 1948; his first game at Comiskey Park as a big leaguer was on August 13, 1948, when he pitched a 5-0 shutout (his first in the White majors) against the White Sox.

Krsnich did not get to bat against Paige. Richards put in lefty Tommy Byrne (the former Yankee pitcher) to bat against the right-handed veteran. Paige made quick work of the White Sox, getting Byrne on a fly ball and Fox on a comebacker, and there was no further scoring in seventh inning.

The White Sox needed a new pitcher for the top of the eighth, and Richards sent Connie Johnson into the game for his White major-league debut. Not only was it Johnson’s first appearance at Comiskey Park since his Negro League days, it was also the first time Black pitchers on opposing teams had ever faced each other in the White big leagues. Johnson and Paige had first met as teammates on the 1941 Kansas City Monarchs; 12 years later, they were making history together.

Johnson kept the game within reach by pitching two scoreless innings. The White Sox scored single runs against Paige in each of the game’s last two innings, but Satchel held the lead and the Browns won, 6-4. The last out, a fly ball by Miñoso, came 2:28 after the game had started.

The win went to Littlefield, his first of the season. For the season, he went 7-12. Littlefield’s major renown came from moving from team to team. The Browns were his fourth team in his first four seasons. There would be five more stops before he concluded his career with the Milwaukee Braves in 1958.

The 46-year-old Paige was credited with his first save of the season.

Dobson was charged with the loss. He was in his 13th major-league season. He pitched to a record of 5-5 in 1953, his last full season, and retired early in the 1954 season.

The White Sox were contenders in 1953. As late as July 18, they were within four games of the league lead. They finished in third place with an 89-65 record.

After the season, the Browns moved to Baltimore and became the Orioles. Several players from the 1953 Browns played little – if at all – in their new home. Wertz was dealt to Cleveland after 29 games in Baltimore. Sievers, who had been Rookie of the Year in 1949, was traded to the Washington Senators, where he slugged a league-leading 42 home runs in 1957.

Paige was among those who did not go to Baltimore. He pitched most of the 1953 season out of the bullpen and registered 11 saves with a 3-9 won-lost record. His ERA was 3.53. He had announced his retirement from the Browns prior to the 1953 season but remained active. He returned to the Negro Leagues and appeared in the East-West Game on July 31, 1955, pitching three scoreless and hitless innings. The next season, he won 11 games in the International League with the Miami Marlins. He was with the Marlins through 1958.

Johnson, who split the 1953 season between the minors and majors, returned to the majors to stay in 1955. In 1957 with the Orioles, he won 14 games, the most for a Black pitcher in the American League to that point. Paige had established the prior record of 12 wins with the Browns in 1952. Johnson’s last full big-league season was 1958. After two seasons in the minors, he pitched briefly (three games) with Pericos de Puebla in the Mexican League in 1961 before a short return to the Negro Leagues with the barnstorming Philadelphia Stars in August 1961.1

This game was easily lost in the shuffle, and the significance of Johnson and Paige appearing against each other was not fully recognized by the contemporary media. An article about Black big leaguers in the Journal and Guide, a Black newspaper in Norfolk, Virginia, made a brief mention of the matchup, but the historical impact of what happened on April 17, 1953, at Comiskey Park went largely unnoticed.2

In addition to the sources shown in the Notes, the author used Baseball-Reference.com, and the following: