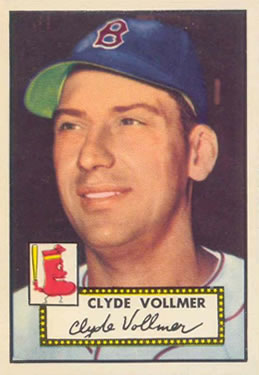 Things weren’t looking that good for the Red Sox heading into the bottom of the ninth. It was the home opener of the 1952 season at Boston’s Fenway Park. Jimmy Dykes and his Philadelphia Athletics held a 4-1 lead. Right-hander Bob Hooper was dealing. He’d allowed seven scattered hits and walked three, but the Red Sox weren’t putting anything together. The Red Sox had not won a home opener since 1947.

Things turned around in the ninth and the game went into extra innings.

The Red Sox had started with Ray Scarborough on the mound. He was a righty, too, had been pitching in the majors since 1942 and was an All-Star in 1950. He’d been 12-9 for Boston in 1951, his first year with the team, but had an unfortunate 5.09 earned-run average.

Hooper had been 15-10 and 12-10 in his two prior seasons. The Athletics had split two games with the Yankees to start their season. The Red Sox had taken two out of three from the Senators, in Washington.

After the opening ceremonies with a Marine Corps band and the governor throwing out the ceremonial first pitch, Scarborough got three groundouts from the first three batters.

After Hooper got a strikeout and induced a groundout in the bottom of the first, left fielder Don Lenhardt singled to center field but was thrown out at second base for trying to stretch his hit into a double.

Philadelphia left fielder Gus Zernial doubled to left field and right fielder Allie Clark singled to right to start the second. Billy Hitchcock, the third baseman, singled to center and drove in Zernial. Clark got to second base. Second baseman Pete Suder grounded into a 5-4-3 double play; Clark took third. Joe Tipton walked; he was Hooper’s catcher. Hooper was up next and helped his own cause with an RBI double to left field. Shortstop Eddie Joost grounded out to his counterpart.

Staked to a 2-0 lead, Hooper bore down and retired 10 of the next 11 batters he faced. The only Red Sox batter who reached base was the pitcher, Scarborough, who singled in the third inning.

The next scoring was in the top of the fifth. With one out, Scarborough walked center fielder Elmer Valo and then Zernial. Allie Clark singled to left and Valo scored. On the throw to the plate, both runners were able to advance.

With one out in Boston’s half of the fifth, right fielder Faye Throneberry singled and second baseman Ted Lepcio walked. Ted Williams, who had not been playing due to a pulled leg muscle, pinch-hit for Delock and hit a sinking line drive to right field that was caught by Clark.

Ellis Kinder became Boston’s third pitcher. He walked Tipton, whom Hooper sacrificed to second, but Kinder got groundouts from the next two batters.

The Red Sox got on the scoreboard in the bottom of the sixth. With one out, Piersall singled to center and Lenhardt singled to left. Third baseman Vern Stephens singled to third. An errant throw allowed Piersall to score and put Lenhardt on third and Stephens on second, but the threat fizzled as Hooper bore down.

Neither side got a man on base in the seventh.

Billy Hitchcock led off the eighth with a solo home run into the screen in left-center, extending Philadelphia’s lead to three runs. It was the only hit Kinder gave up in his four innings of relief work.

The score was still 4-1 when the Red Sox came up to bat in the bottom of the ninth. Three pinch-hitters in a row got it started.

Johnny Pesky batted for Lepcio and drew a base on balls. Billy Goodman pinch-hit for catcher Sammy White, but struck out. Clyde Vollmer (despite having hit a “very non-boisterous .083” in spring training) pinch-hit for Kinder and lined a single over the shortstop and into left field.1 Pesky stopped at second. Dom DiMaggio batted for himself. He hadn’t gotten the ball out of the infield his first four times up, but this time he singled off Joost’s glove and into left field and drove in Pesky. Philadelphia’s lead was down to 4-2.

At this point Roland “Tex” Hoyle came in to relieve Hooper. Hoyle was making his major-league debut.

With the count 3-and-2, Piersall doubled off the left-field wall, scoring Vollmer with DiMaggio on third. It was now a one-run game.

Harry Byrd replaced Hoyle. The first thing he did was to intentionally walk Lenhardt to load the bases and set up a force play at any base, as well as the possibility of a double play. Gene Stephens ran for Lenhardt. Batting next was Vern Stephens, and the Athletics got a force out when Stephens hit a “slow dribbler” to the left of the mound.2 The ball wasn’t hit that sharply, however, and the only play was to second base. Gene Stephens was out, but DiMaggio scored and the game was tied, 4-4.

There were runners on first and third, now with two outs. Walt Dropo grounded out, short to first.

The fans still at Fenway got to see some bonus baseball. Not everyone was around to see the comeback. Joe Cashman of the Boston Daily Record explained, “A few thousand of the customers, not yet acquainted with the fact that the current Fenway flock have a manager and a host of players who don’t know when they’re licked, walked out after eight innings when our heroes were trailing 1-4 and seemed to be completely mesmerized by Bob Hooper.”3

In the bottom of the inning, Byrd walked the leadoff batter for Boston, Faye Throneberry. Gus Niarhos, who had come in to catch, tried to sacrifice but bunted foul for a third strike. Billy Goodman singled to left, Thoneberry moving up 90 feet. Vollmer — who’d come into the game to pinch-hit in the ninth — lined a single to left field, easily driving in Throneberry and winning the game.4

Bill Wight was the winner. Byrd was the losing pitcher.

Scarborough was without a decision in this game, of course. He was 1-5 for the Red Sox in 1952 until his contract was purchased by the New York Yankees on August 22. His record over the remainder of the season with the Yankees was the exact opposite: 5-1, with a 2.91 ERA. He pitched in Game One of the 1952 World Series.

The Yankees finished the season in first place, two games ahead of the Indians. The 79-75 Athletics finished fourth. The Red Sox (76-78) finished sixth.

4 Vollmer’s late-inning heroics in the previous season had earned him the sobriquet “Dutch the Clutch.”