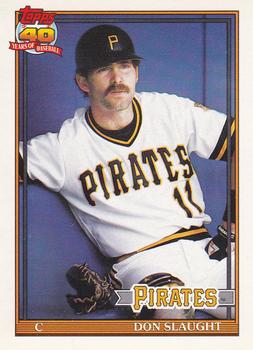 It was cloudy, misty, and a cold 43 degrees in Pittsburgh on this April Sunday.1 The Cubs and Pirates were concluding their four-game series, with the Pirates having taken two of the previous three games. The Pirates were the defending NL East champions, with the Cubs one of the favorites to win the division in 1991, and the teams entered the day tied for the lead in the early going.2 The official attendance was 10,860, but given the dismal weather, there were probably fewer people in the seats, and there were no more than a few hundred by the game the game concluded. Those few who stayed witnessed history. They saw 25 runs cross the plate despite both starting pitchers pitching well. They saw arguably the greatest offensive player of the generation collect a golden sombrero. They saw a future Hall of Famer hit a grand slam, and a backup catcher collect his first major-league hit. They saw baseball, in all of its wacky glory.

The Pirates stars were struggling. Barry Bonds was 0-for-17 against the Cubs and had a batting average below .100. Bobby Bonilla had just two hits so far in the series. The Cubs had scored a combined 10 runs in the first three games of the series, and had scored five runs or more only three times so far in the young season.

Randy Tomlin and Mike Harkey started the game and put up zeros through four innings, with Harkey perfect. Andre Dawson led off the fifth with a single to right, but was caught stealing when Tomlin threw to first instead of home. Shawon Dunston drew a walk and was credited with stealing second after he was picked off, but first baseman Orlando Merced’s throw to second base on the 1-3-6 play was wild. Erik Pappas (in the majors because of injury to Joe Girardi and making his first career start) popped out to end the threat. In the bottom of the fifth, Harkey walked Bonilla, and Bonds improved on his .067 batting average with a single to right, moving Bonilla to third. After Jeff King flied out to Dawson in right, Mike LaValliere lined a double to right to score Bonilla, and while Dawson got to the ball quickly enough to keep Bonds from scoring on this hit, he scored on Jose Lind’s sacrifice fly, just beating the throw from Dawson, who took four steps before throwing. Tomlin lined one just foul before striking out to end the threat. After five innings, the Pirates led 2-0.

The lead wouldn’t last. Harkey led off the sixth inning with his second hit of the game. Jerome Walton followed with a single to put runners on first and second. Ryne Sandberg doubled to left-center to score Harkey, and Mark Grace hit a sacrifice fly to deep right to score Walton and tie the game. George Bell struck out, but Dawson came through with a single to left, scoring Sandberg and giving the Cubs a 3-2 lead.

Harkey walked Merced leading off the bottom of the sixth, but struck out Jay Bell, giving him seven strikeouts for the game, a career high.3 However, with the left-handed Andy Van Slyke due up next, Harkey was replaced by Paul Assenmacher.4 Assenmacher picked off Merced and retired Van Slyke to preserve the lead.

Neal Heaton replaced Tomlin and, despite giving up a single to Assenmacher, pitched a scoreless seventh. In the Pirates half of the seventh, Assenmacher was masterful. Bobby Bonilla reached on a strikeout/wild pitch, but Assenmacher struck out Bonds and Don Slaught.

In the eighth, it seemed that the Pirates’ defense would doom them. After Heaton plunked Grace, he was replaced by Mark Huismann. George Bell followed with a double, scoring Grace and making it 4-2 in favor of the Cubs, but Huismann retired Dawson and intentionally walked Dunston to set up the double play. Gary Scott hit a groundball straight to Jay Bell at shortstop, but Bell hurried his throw to second because the runners had started, and threw the ball into right field. The error scored both Doug Dascenzo (who had run for George Bell) and Dunston, and Scott made it to third base. He scored on Pappas’s first major-league hit, a single through the drawn-in infield.

“Look at the fans, they’re all leaving, they’ve had enough of this rainy day,” said Harry Caray up in the booth.5 One could hardly blame them. Despite Huismann recovering to strike out Assenmacher and Walton, the Pirates trailed 7-2 and the weather was miserable. But Assenmacher faltered in the bottom of the eighth. Jose Lind led off with a single, and pinch-hitter Lloyd McLendon walked. Merced tripled home both runners, but Jay Bell struck out and Andy Van Slyke grounded to the pitcher. Bobby Bonilla lined a home run to left, bringing the Pirates within a run at 7-6, but Bonds struck out for the third time in the game to end the inning.

The Cubs went down in order in the top of the ninth. Dave Smith came on to close out the game. He had saved his first four games of the year, but blown a save earlier in the series. King led off with a single, and Slaught sacrificed him to second. Smith retired Lind on a line drive to left, but Gary Varsho hit a pinch-hit double to score King and tie the game, 7-7. Smith intentionally walked Merced and got Jay Bell to ground out to end regulation.

After four runs in the eighth and one more in the ninth, the Pirates were in the driver’s seat. Bob Kipper retired the Cubs in order in the 10th. Chuck McElroy took over on the mound for the Cubs and struck out Van Slyke, but gave up a double to Bonilla. That brought Bonds to the plate with the winning run in scoring position, but he struck out again, giving him a golden sombrero.6 King was intentionally walked to set up the force play, and Heathcliff Slocumb replaced McElroy. A wild pitch put runners on second and third, but Slaught grounded out to end the threat and take the game to the 11th inning.

Kipper started the Cubs’ 11th by walking Pappas and Jose Vizcaino, before being replaced by Bob Patterson. Walton bunted too hard, and Merced threw across the diamond to retire Pappas at third and keep the double play intact. Sandberg lined a single into left field, but it was hit too hard to score Vizcaino, keeping the double play still intact. Luis Salazar hit one down the third-base line, knocked down by Curt Wilkerson, who threw home to retire Vizcaino, who had hesitated, unsure whether or not the ball was caught. Dascenzo came to the plate with the bases loaded and two outs, and lined a single to Bonds in left, scoring Walton. Sandberg stopped at third because the ball was hit too hard.

Patterson got Andre Dawson down 0-and-2, but Dawson battled off a pitch and drove a low line drive over the right-center-field wall for his second grand slam of the series. “And the Cubs have put this game away,” said Caray, “Holy Cow!”7 Dunston flied out to center to end the top of the 11th, with the Cubs now leading 12-7.

Slocumb, however, was determined not to be outdone by Kipper and Patterson. He walked Lind to lead off the inning. Said Caray: “you never know. We got four in the eighth and they came right back with four in the eighth.”8 Wilkerson thought he had also drawn a walk, but was called back to the plate and instead hit a single to right. Merced followed with a single of his own, loading the bases and causing Cubs manager Don Zimmer to pull Slocumb and bring in former Pirate Mike Bielecki.

Bielecki faced Jay Bell with the bases loaded. Bell had been having a terrible game, going 0-for-5 and committing the error that keyed the big Cubs inning in the eighth, but he turned it around, lining a double down the left-field line and scoring two, making it a 12-9 game. Andy Van Slyke finally got to face a right-handed pitcher, and, after fouling one just out of the reach of Vizcaino, lofted a sacrifice fly to center, scoring Merced and making the score 12-10. With one out, Bonilla came to the plate, but was walked, Bielecki choosing to pitch around the slugger who already had two extra-base hits in the game.

That brought Bonds to the plate with runners on the corners and one out, with his batting line 1-for-5, a single and four strikeouts. He singled to center, scoring Bell and moving Bonilla to third. Gary Redus hit for Patterson and drew a walk to load the bases. Don Slaught came up and hit a double to center, scoring Bonilla and Bonds and sending everyone home with the Pirates winning 13-12 after not one, but two improbable comebacks. “The Pirates, in unbelievable fashion, have won another ballgame,” Caray observed ruefully.9

It was the largest extra-inning comeback in baseball history, and would not be equaled for more than 20 years.10 “Holy cow,” indeed.

1 While the box score says no precipitation, game video available at https://youtu.be/Yu9QOjQ5ye0 clearly shows umbrellas visible. The rain was also mentioned at other times on the broadcast, especially in the fifth as the Pirates took a lead that would have made the game official had the rain forced an early end.

2 The Pirates successfully defended their division title. While the Cubs had been in first place before the series in Pittsburgh, they fell out of first and would never approach it again. Don Zimmer was fired in mid-May (one of a record 11 managerial firings during the 1991 season) and the Cubs limped to a fourth-place finish. While tied in games back and winning percentage with the Phillies, they were behind them when rounded to the fourth decimal place. The Phillies played two more games and were 78-84 (.48148) while the Cubs were 77-83 (.48125)

3 Harkey played five more seasons and made 69 more starts, but never struck out seven in a game again.

4 While Assenmacher became a lefty specialist later in his career, and certainly was better against left-handed batters throughout his career, he led all NL relievers in innings pitched in 1991, throwing over 100 innings in 75 appearances, and picking up a career-high 15 saves. He had 40 appearances throwing more than one inning, and only two appearances where he faced a single batter. By contrast, in his 1997 season with the Indians, he appeared in 75 games, but threw more than one inning only six times and faced a single batter 22 times. Assenmacher’s career in the ’90s is a clear demonstration of how bullpen usage evolved.

6 This was only the second golden sombrero of his career. The first was as a rookie in 1986. He wouldn’t strike out four times in a game again until 1999, and would have only four in his entire career.