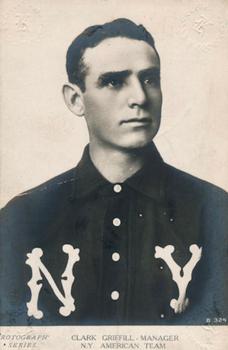 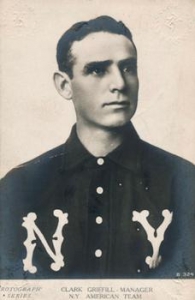 It came three months after a peace summit ended the war between the AL and the National League. When the junior circuit began operations in 1901, it generated terrific friction with the established NL because players were siphoned away to play in the new league and contracts were broken. Peace was needed for the sake of the game.

Settlement almost didn’t happen. The New York Times reported, “It looked as if the two years’ war between the major baseball organizations would be continued until either one or both leagues would drop out of existence through lack of money to continue the fight.”1

Part of the negotiations included New York. The AL needed a foothold in the country’s biggest population center, which already had NL teams in Brooklyn and Manhattan. Adding a franchise created a three-team paradigm that continued until 1957, when the Giants and Dodgers played their last season in New York and announced plans to move to California.

Although the New York Americans ballclub – later known as the Highlanders and then the Yankees – was not a true successor franchise to the Baltimore Orioles, it was created in the wake of that team’s implosion after Baltimore’s two-year tenure in the AL.

In its first contest, New York endured a 3-1 loss to the Washington Senators in the nation’s capital. Clark Griffith – later Washington’s manager, then its owner for many years – served as the Americans’ manager and Opening Day starting pitcher. His pitching record was 14-11 in ’03.

New York’s official début took 1 hour and 45 minutes to complete; fans numbered 11,590, which was the largest crowd to date for Washington’s ballpark in three seasons of hosting games.

In accordance with baseball’s rules in 1903, the Senators, as the home team, elected to bat first.

Washington skipper Tom Loftus and his team had a task not envied by many. To the delight of New York’s followers, right-hander Jack Chesbro took the hill; he had signed with the AL team during its formation the previous September.2 It was a cause for optimism because Chesbro had an outstanding performance in ’02, leading the National League in wins and the majors in winning percentage and shutouts.

The Senators dampened those spirits quicker than a politician makes promises during an announcement of candidacy. In the first inning, they drew three walks. But a double play quashed the possibility of scoring.

Described as a “pitchers’ battle” by the New York Times, the game looked promising for the visiting New Yorkers in their first time at bat: Wee Willie Keeler drew a walk from Al Orth and then engaged in a hit-and-run with Dave Fultz supplying a single.3 Jimmy Williams drove in Keeler with a fly out.

It was the first of 95 runs that the veteran Keeler scored in ’03. He came to the AL’s nascent team the previous autumn, when plans formed for the team in the wake of the Baltimore Orioles organization folding.4

In the top of the fourth, Washington challenged Chesbro and evened the score at 1-1.

The stellar hurler faced runners in scoring position after Ed Delahanty walked, advanced a base on Ryan’s fly ball to Wid Conroy, and arrived at third base when Scoops Carey singled and took second.5

But Delahanty’s visions of being the first Washingtonian to score in the ’03 season did not achieve realization. Bill Coughlin’s groundball to Chesbro inspired Delahanty to sprint toward home plate, but he got caught in a rundown. Then Gene DeMontreville doubled Carey home with the tying run.

The home team surpassed the visitors in the fifth inning. Orth began by grounding out. Rabbit Robinson slammed a base hit to right field, followed by Kip Selbach hitting a line drive to left field. Then Delahanty smacked a single to left, driving in Robinson to make the score 2-1; Selbach got to third base.

After Jimmy Ryan made the second out with a foul ball caught by New York’s backstop, Jack O’Connor, shortstop Herman Long “fumbled” Carey’s ground ball.6 Selbach scored the third run for Washington, but Delahanty tried and failed to score.7 Washington nearly padded its two-run cushion in the sixth inning, when Coughlin ripped a hit to left field that would have been a home run if not for the fence. It smacked the barrier “about twenty feet from the ground,” and Coughlin wound up with a double.8

The Evening Star’s account gave a bit of grace to Robinson at shortstop when he made two errors in a dozen opportunities. Described as “poor throws to first,” the paper noted that Robinson had not been stationed there for three years.9

Washingtonians shouted their support for the home team like delegates at a political rally, but offered tangible plaudits beyond loud voices and thundering applause. Players got flowers; Selbach also received a “silk umbrella garlanded with roses.”10

Delahanty was a favorite of the Washington fan base, which was effusive in its acknowledgment of the veteran slugger who had led the majors in homers twice, RBIs three times, and doubles four times.11 He also reached the .400 barrier three times. Delahanty’s reception confirmed the reports in the Evening Star about his place in the baseball hierarchy. “When he stepped to the plate the first time he was the recipient of a magnificent horseshoe of roses, and when he doffed his cap in acknowledgment there was hardly a person inside the inclosure who did not join in the hearty shout of welcome.”12

Delahanty died later that summer when he fell during a train stop after a physical encounter with a night watchman on a bridge over the Niagara River. It’s not known whether he leapt intentionally or fell the 25 feet into the river because of drunkenness. The river at that point was 40 feet deep; Delahanty’s body was found 20 miles downstream from where he fell.13

In addition to the sources cited in the Notes below, the author relied on pertinent information from Baseball-Reference.com and Retrosheet.org, including the box scores.

11 In 1902 Delahanty shared the top spot with Harry Davis of the Philadelphia Athletics. He also led the NL in doubles in 1901; Nap Lajoie of the Cleveland Naps topped the majors with 48.

13 For more on the circumstances leading to Delahanty’s death, check out John Saccoman’s SABR bio: /bioproj/person/ed-delahanty/.