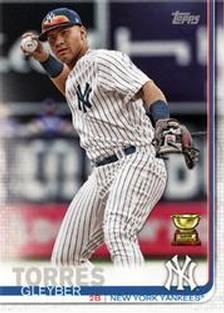 This Monday night game was the first of a four-game series as part of a nine-game West Coast swing for the New York Yankees (11-10, second in the AL East, 2½ games back of Tampa). The Yankees were definitely not at full strength. They had 13 players on the injured list, including Aaron Judge, Giancarlo Stanton, and Gary Sánchez.1

Matt Harvey (0-2, 9.64 ERA), the former “Dark Knight of Gotham,” sought to revive his career at age 30 on a one-year contract with the team that had originally drafted him out of high school in 2007.2 His pitching for the Angels (9-13, 5½ games behind Seattle, last in the AL West) had been erratic in the young season. He would pitch a few solid innings, then have one or two innings in each outing that would get away from him.

The game started dramatically for the Yankees. Luke Voit hit a one-out homer well up into the bleachers in center in the top of the first. Mike Trout just looked up at it — this wasn’t one he had a chance to bring back from over the fence.

J.A. Happ (also 0-2, 7.23 ERA) worked a clean first inning for the Yankees, including a groundout by the Angels’ star Trout.3 Harvey also worked a clean top of the second.

In the home second, after Kevan Smith hit a one-out single to right-center, Jonathan Lucroy homered just over the center-field wall to give the Angels a 2-1 lead. It was Happ’s seventh home run allowed in 2019 in 20 innings pitched — compared with 10 in 63⅔ innings the season before. Kole Calhoun walked on four close pitches but was erased when Zack Cozart grounded into a double play.

Kyle Higashioka doubled off the center-field wall to start the third. After Tyler Wade looked at strike three, Harvey walked Brett Gardner and Voit to load the bases, much to the expressed dismay of the crowd. Calhoun caught Gleyber Torres’s fly to right near the foul line; Higashioka tagged and slid in with the tying run as Calhoun’s throw got by the catcher. Clint Frazier flied out to left with the score tied 2-2 — where it remained until the 12th inning.

All that happened worth mentioning between the bottom of the third and the top of the eighth was that Cozart managed a base hit in the fifth. He was coming back from offseason labrum surgery at age 33 and his .100 BA needed some improvement.4

In the bottom of the eighth, Yankees relief pitcher Adam Ottavino took the mound, looking for redemption. He’d allowed six runs (three earned) on six pitches the night before, raising his ERA from 0.90 to 3.27 in the process. Cozart hit a bouncer to third, fielded beautifully by third baseman Gio Urshela for the first out. Brian Goodwin dunked one into short left for a single. While Justin Bour was at the plate, Ottavino’s pickoff attempt went through Voit’s glove, but the ball didn’t go far enough to let Goodwin scoot to second. (Voit got a new glove while his original was repaired between innings.) Bour grounded into a double play to end the inning.

After Angels reliever Hansel Robles struck out the side in the ninth, Ottavino5 worked a second scoreless inning in the bottom of the ninth, with the help of a double play after Trout’s single.

Taylor Cole pitched clean innings in the top of the 10th and 11th, and Tommy Kahnle threw a spotless bottom of the 10th. At this point, the Yankees had only one baserunner since the fourth inning — and that was a walk in the eighth. The Angels had managed three singles and a walk.

The Angels threatened in the bottom of the 11th. With two outs and nobody on base, Yankees manager Aaron Boone ordered an intentional walk to Trout. Trout stole second with Andrelton Simmons batting, and Simmons walked on four pitches. The crowd cheered when Albert Pujols came to the plate, but he ended the inning by grounding out to short.

Cole took the mound for his third inning of work in the top of the 12th. Frazier hit a one-bounce double off the right-field wall. He didn’t slide, so he barely beat the ball to second. The Angels reviewed the replay but didn’t challenge.

On a pickoff to second, Simmons and Frazier got tangled. Frazier twisted his ankle but stayed in after a visit from the trainer, playing the rest of the game with the ankle taped — over his uniform.6 Mike Tauchman advanced Frazier on a groundout to first. Mike Ford was intentionally walked. On Urshela’s sacrifice fly to Trout, Frazier managed to score (bad ankle and all), cheered on by the substantial number of remaining Yankees fans. Higashioka struck out, but the Yankees led, 3-2.

In most marathon7 games, there comes a point when the game gets wonky. Something happens that would be unlikely in the first nine innings. A manager may run out of players, resulting in a pitcher in the outfield; a position player has to pitch; a relief pitcher bats for the first time in years; the next day’s starter has to pitch in relief; or someone is forced to play a completely new position. This game passed that wonky point in the bottom of the 12th.

Given the one-run lead, Boone called on his closer, Aroldis Chapman. Although Chapman came in throwing heat (97-100 MPH), Smith managed a base hit to left. Peter Bourjos pinch-ran. As Lucroy struck out, Bourjos (living up to his “Fleet Pete” nickname) beat the throw to second to get into scoring position. Calhoun lined out to left center for the second out, but not far enough for Bourjos to advance.

The Yankees fans stood, anticipating the last out. Cozart fouled off four pitches before being hit by a pitch on his back leg. Goodwin singled in Bourjos, tying the game, 3-3. Cozart dived back into second, sustaining a neck injury as he lost his helmet and collided with DJ LeMahieu.8 Felix Peña, a relief pitcher, ran for him as the Angels were out of position players. The fans settled back into their seats.

Chapman took advantage of the pause in the action as the Angels tended to Cozart, coming to the plate to complain to umpire Mike Everitt about the strike zone. Higashioka separated them before Chapman could get tossed. Tommy La Stella grounded out to second to end the inning, but the game would continue.

The 13th started with substitutions for the Angels. La Stella moved from second to third to replace the injured Cozart. Bourjos took over at second. Luke Bard came in to pitch; because he replaced Peña in the lineup, the Angels lost their designated hitter. In his 10-year major-league career, Bourjos had never played an infield position (nor had he played there in the minors). Bard worked a clean inning with assistance from a dramatic diving catch by Bourjos,9 who flipped the ball to first in time to retire Gardner.

Jonathan Holder (7.00 ERA over nine innings in 2019) faced the meat of the Angels’ order in the bottom of the 13th. He got Trout to look at strike three for the second time in the game, to the expressed disappointment of the ever-diminishing Angels-fan portion of the crowd. After Simmons flied out, Pujols rocketed the first pitch directly into shortstop Torres’s glove for the third out.

Torres led off the top of the 14th by swinging and missing at strike three, but the ball got away from catcher Lucroy. He corralled it but his throw to first went well over Pujols’ head, so Torres was safe. Bard struck out Frazier. Tauchman fanned for the Yankees’ third strikeout of the inning, but Torres took second on a wild pitch. Ford was intentionally walked to bring up Urshela.

Angels manager Brad Ausmus paid a mound visit to be sure everyone was on the same page. It didn’t seem to help. Torres stole third and scored when Urshela singled just out of Trout’s reach. Bard struck out Higashioka to end the inning. The remaining crowd (and the hardy souls in New York who had stayed up to 2:30 a.m.) had just witnessed an extremely rare event: The Yankees had struck out four times, but had taken the lead, 4-3.10

After the “14th inning stretch,” Holder returned to try once more to preserve the Yankees lead. Bourjos was called out on a pitch low and away (the strike zone seemed to have expanded slightly as evening became morning). After Lucroy grounded out, the Yankees intentionally walked Calhoun to face pinch-hitting pitcher Trevor Cahill.11 He struck out to end the game.

This was the start of a successful road trip for the Yankees. (They won six of nine.) They recovered from their injury-ridden start to win their division and the Division Series, but lost the Championship Series to the Astros. The Angels went over .500 for three days in July but ultimately finished fourth in the AL West.

2 He didn’t sign out of high school, instead signing out of college with the Mets. The career revival attempt didn’t work out: The Angels released him on July 21, 2019 with a 3-5 record and a 7.09 ERA.

7 Games that require a 14th inning stretch, as defined by the author.

9 Bourjos’ last career game was less than two weeks later, so this was definitely a once-in-a-career play.

10 Four strikeouts in an inning has occurred (as of 2020) 92 times in major-league history. baseball-almanac.com/feats/feats19.shtml. A team striking out four times and still taking the lead has happened before: For example, on July 25, 1996, in the top of the ninth at Coors Field, the Rockies’ Bruce Ruffin struck out four Cubs but also allowed the two winning runs to score on a walk, two singles, and two wild pitches.