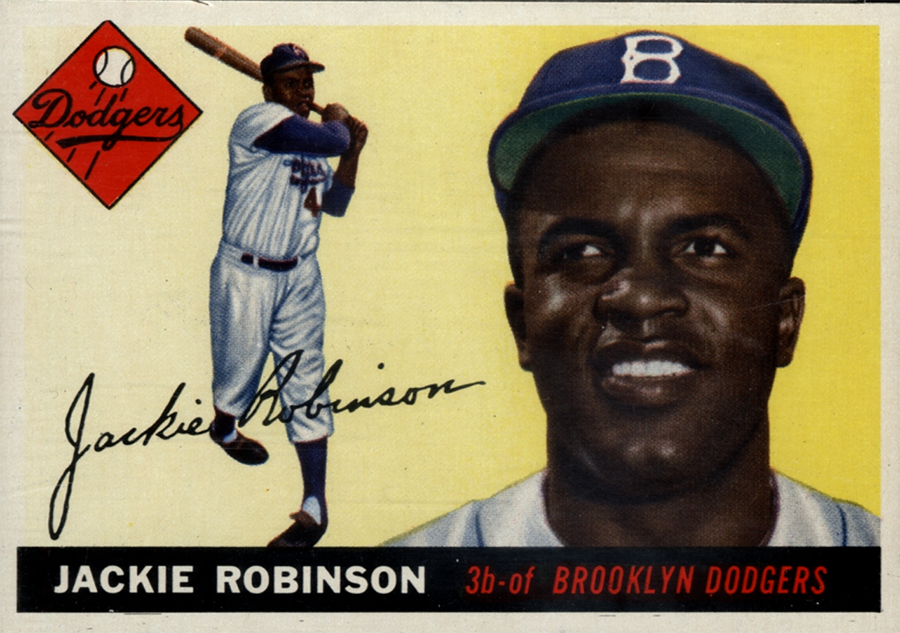 The Brooklyn Dodgers and the New York Giants began a three-game series at Ebbets Field on the evening of Friday, April 22, 1955. The Dodgers started the season winning their first 10 games while the Giants, winners of the 1954 World Series by sweeping the Cleveland Indians, had lost five of their first seven. The Dodgers and Giants had met in a two-game series earlier with the Dodgers winning both. On that Friday night with the Giants trailing 3-0 going into the eighth, they erupted for five runs. The Dodgers got one back in the bottom of the eighth but no more and lost 5-4.1 The 10-game winning streak had ended.

The starting pitchers for the second game of the series, on Saturday afternoon, were Sal Maglie for the Giants and Carl Erskine for the Dodgers. Managing the Giants was Leo Durocher while Walter Alston was at the helm for the Dodgers. The Dodgers were led by their “Boys of Summer”: Jackie Robinson, Pee Wee Reese, Roy Campanella, Duke Snider, Carl Furillo, and Gil Hodges.2 The Giants had Alvin Dark, Willie Mays, and Monte Irvin in their lineup. With Leo and Furillo, there was always the possibility of fireworks given the history between the two. In 1953 Durocher taunted Furillo and Carl charged after Leo. Furillo ended up with a fractured left hand.3

Whitey Lockman led off the game with a double to left field. He went to third base on Dark’s groundout but did not score. In the Dodgers’ half of the inning, Maglie walked Junior Gilliam, who stole second and went to third on a groundout by Reese. Gilliam was stranded at third when Hodges struck out.

Erskine began the top of the second by walking Irvin and Don Mueller. Davey Williams bunted down the third-base line. Erskine fielded the ball but threw it over Robinson’s head at third base.4 Irvin scored and Mueller and Williams ended up at third and second respectively. After Ray Katt popped out to second, Maglie hit a fly ball to Sandy Amoros. Mueller tagged up at third but was thrown out at home on Amoros’s strong throw to the plate.

In the Brooklyn second, the Dodgers threatened. Amoros was hit by a pitch leading off. Campanella’s single sent Amoros to third. Robinson was next up and Maglie got two quick strikes on him. The next pitch was thrown behind Robinson’s head, and on the next pitch he struck out. When Robinson returned to the dugout, Pee Wee Reese instructed Jackie, “When you come up, drop one down the first-base line and dump (Maglie) on his butt.”5 The Dodgers rally fizzled as Maglie retired the next two hitters on a fly ball and a force out.

The Giants threatened in the top of the third. With one out, Dark walked and Mays singled. Erskine got out of the jam on a strikeout and a groundout. In the bottom of the inning, the Dodgers tied the score at 1-1 when Gilliam walked again and Snider doubled him home. In the top of the fourth, Erskine retired the Giants on three fly balls.

Campanella led off the Dodgers’ fourth by striking out but not before avoiding a Maglie pitch that was up and tight. Following Reese’s mandate, Robinson bunted down the first-base line. His intent was to draw Maglie to either field the ball or cover first base. Maglie, however, did not go for the ball or cover first base.6 First baseman Lockman fielded the bunt. Second baseman Davey Williams, seeing no one was covering first base, raced over and caught Lockman’s toss just in time for the out. However, as he caught the ball, he was bowled over by Robinson. Instead of Maglie, Williams bore the brunt of the retaliation. Giants shortstop Dark raced over to confront Robinson but was stopped by umpire Tom Gorman.7 The players were separated and play continued. Furillo made the third out flying out to center field.

While the Giants were in the dugout after the inning, Durocher and the coaches and players agreed they had to retaliate. There are several versions of exactly what occurred in the dugout. In one version, Durocher was concerned about how his black ballplayers felt about going after Robinson. Supposedly, he asked Monte Irvin and Hank Thompson and they told him to go get Robinson, he had hurt a teammate.8 Another version had Dark, the Giants captain, vowing revenge.9 He was to bat third in the top of the fifth.

Maglie struck out leading off the fifth and Lockman popped up to the catcher, bringing up Dark, who hit a line drive down the left-field line for what appeared to be a sure double. However, Dark did not stop at second base and continued to third to confront Robinson, who took the throw from left field. Dark looked like a sure out. However, he bowled over Robinson, who dropped the ball. Once again, an umpire, Babe Pinelli, got between the two players. Robinson cursed at Dark and said, “I’ll get you at shortstop.”10 Dark was stranded at third as Mays flied to left. After the game, Herman Franks, the Giants third-base coach, told Dark he was crazy to pull a stunt like that at Ebbets Field.11

The Dodgers did not score in the bottom of the fifth and neither did the Giants in the top of the sixth. The Dodgers loaded the bases in the sixth on two singles and a walk but Furillo ended the rally by flying out to center. Both teams went out in order in the seventh. The Giants got a man on base in the top of the eighth when Dark singled, but he failed to score.

With the score still tied, Hodges doubled to left with one out in the eighth and scored on a triple by Amoros. Campanella grounded out to pitcher Maglie. Sal then walked Robinson and Furillo singled to left, scoring Amoros for a 3-1 Dodgers lead.

In the top of the ninth, the Giants’ Mueller singled with one out. Dusty Rhodes batted for Williams, who had stayed in the game after the fourth-inning incident. Rhodes hit a sharp drive to the right side. Gilliam bobbled it but was able to get Mueller at second. Bobby Hofman batted for Katt and grounded to shortstop. Reese threw it to second for a game-ending force play.

After the fifth-inning skirmish there was no more roughhousing, although there were hot words and an undercurrent of tension.12 Erskine pitched a complete game, his third win of the season, allowing six hits, walking three and striking out five. It was a gutsy performance; he had runners on base in every inning except the fourth and seventh. Maglie, the losing pitcher, also pitched a complete game, walking six batters and giving up seven hits. Maglie had been hit hard in his first two games of the season, so this start was a good sign for the Giants faithful. Amoros was the hitting and fielding star for the Dodgers with two hits, including the decisive triple in the eighth inning. Campanella also had two hits. Dark led the Giants with his fifth-inning double and a single.

After their powerful start, the Dodgers won the National League pennant without any serious challenges. Campanella received the National League Most Valuable Player Award with Snider, who led the team in home runs, RBIs, and runs scored, close behind in the voting. The Giants finished in third place with a record of 80 wins and 74 losses, 18½ games behind the Dodgers. The Dodgers met the New York Yankees in the World Series and behind the pitching of Johnny Podres and fielding of Amoros won the decisive Game Seven, 2-0. “Wait Till Next Year” had arrived.

The author discussed these incidents in a phone conversation with Alvin Dark and his wife, Jackie, in 2008. I want to thank Mike Huber, Bruce Slutsky, and Kevin Larkin for their roles in editing the essay.

In addition to the sources mentioned in the Notes, the author consulted the Baseball-Reference.com and Retrosheet game logs:

7 Sheehan. His article was accompanied by an Associated Press photo that showed Gorman restraining Dark.