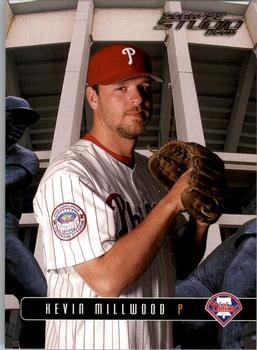 Right-handed starting pitcher Kevin Millwood came to the Philadelphia Phillies in a December 2002 trade for backup catcher Johnny Estrada. The Phillies were looking for an ace to anchor a young pitching staff after acquiring free-agent slugger Jim Thome to bolster the offense. Millwood, coming off an 18-win season for Atlanta, fit the bill. He was available because the cash-strapped Braves were looking to dump salary.1

The 2003 season would be the last for 32-year-old, much reviled Veterans Stadium. A new, as yet unnamed ballpark was under construction in the parking lot just outside. The Phillies were spending big money; in addition to Millwood they had signed free agents Thome and David Bell as they prepared to move into their new ballpark.2

On April 27, 2003, with 40,016 fans on hand to celebrate the Phillie Phanatic’s birthday, the Millwood deal paid huge dividends. In the 32 years the Phillies had played on the Astroturf of Veterans Stadium, only one no-hitter had been pitched there. The Phillies’ Terry Mulholland pitched a no-no against the San Francisco Giants on August 15, 1990, winning 6-0.  Coincidentally, the Giants would be the victims of the second—and last—no-hitter at “The Vet” as well.

It was a sunny spring Sunday afternoon as the Phillies took the field. The ballpark was abuzz with the large crowd and the realization that the Phillies might be contenders. They entered the game with a 14-10 record, one game behind Montreal for first place in the National League East Division. Millwood owned a 3-1 record and had earned the nickname Horse from teammate Pat Burrell because he was carrying the pitching load for the team.3 Millwood had even earned a fanatical Phillies fan club, Millwood’s Militia, who dressed in camouflage and hung a banner in center field celebrating their hero.

The reigning National League champion Giants were a formidable foe, however. They came into the game with the best record in baseball at 18-5. Not only did they possess the top hitter in the game in Barry Bonds, but leadoff hitter Ray Durham entered the contest sporting a .323 batting average and a seven-game hitting streak. Jose Cruz (.314) and J.T. Snow (.364) also represented major offensive threats.

The game began inauspiciously when Millwood walked Durham, but Phillies catcher Mike Lieberthal erased Durham with an excellent throw on an attempted steal of second. After Marquis Grissom struck out on a high slider, Rich Aurilia sent Burrell to the wall in left to flag down his long fly ball.

In the bottom of the first, Ricky Ledee, starting in center field for the injured Marlon Byrd, accounted for the only run of the game—and the only run Millwood needed—with a home run to right-center field off Giants starter Jesse Foppert. Ledee was something of a good luck charm for no-hit pitchers. While playing for the Yankees, he had homered for the first run in David Cone’s perfect game on July 18, 1999, at Yankee Stadium.

In the top of the second inning, Cruz ripped a long line drive to right that curved foul by about 10 feet. After the game, Millwood told Phillies broadcaster John Kruk, “I thought it was a homer. I thought it was 1-1 right then.”4 Two pitches later, Cruz looked at a called third strike. Called third strikes became a theme in the game, as home-plate umpire Mike Everitt established a wide strike zone for both teams all day. Seven of Millwood’s 10 strikeouts were on called third strikes. Several Giants hitters walked away from the plate shaking their heads.

Through the middle innings, both Millwood and the rookie Foppert put on a display of pitching efficiency. The only blemishes on Millwood’s record were the walk to Durham and a two-out walk to Aurilia in the fourth. Foppert held the Phillies scoreless after Ledee’s homer, working around four walks and just one single (by Ledee) in six innings of work. Relievers Joe Nathan and Felix Rodriguez held the Phillies off the board in the seventh and eighth innings, keeping the score at 1-0.

By the seventh inning, a sense of anticipation and hope could be felt in the ballpark. Millwood took the mound in the bottom of the seventh, not only trying to continue the no-hitter but nursing a one-run lead. With each hitter, both the no-hitter and the game were on the line. In the seventh, Marquis Grissom ripped a wicked line drive to center field. Ledee got a late jump on the ball but snared it in the webbing of his glove with a last-second leap. Millwood said, “I was just hoping [Ledee] would get there. I thought it was a home run.”5 The no-hitter was preserved. The crowd breathed a collective sigh of relief. Aurilia came to the plate. The potent bat of Barry Bonds loomed in the on-deck circle.

Aurilia struck out for the second out of the inning. With two out, Millwood could have chosen to pitch around Bonds, but he decided to go after him. He had told manager Larry Bowa before the game that Bonds didn’t appear to be swinging the bat all that well.6 “I decided to try and make him hit my pitch,” he told Kruk.7 The crowd rose in unison as Bonds stepped into the batter’s box. Millwood got the count to 1-and-2 on Bonds and then unleashed what Phillies announcer Chris Wheeler called a “Maddux fastball,”8 a pitch that started at the left-handed hitter and faded over the plate. Bonds took it for strike three. The crowd exploded. Millwood said, “I knew after that I had a good chance to make it happen.”9

With the crowd now permanently on their feet, Millwood cruised through the eighth inning. Every fan and every Phillies player were on edge. Pitcher Randy Wolf rocked back and forth nervously in the dugout. Backup catcher Todd Pratt paced up and down. Millwood, knowing that no one else would talk to him, sat down next to hitting coach Greg Gross. “I kept trying to talk to him. I’d say stuff to get him to talk to me. After the fifth inning, nobody wants to talk to you.”10

On the first pitch in the ninth, Neifi Perez grounded out to defensive substitute Tomas Perez at second base.11 With his 100th pitch of the game, Millwood got pinch-hitter Marvin Benard to ground to Thome at first for the second out. Ray Durham walked to the plate. The no-hitter was on the line. At this point, Millwood was visibly nervous on the mound, mopping his brow and taking deep breath after deep breath. The crowd noise was deafening. Millwood overthrew a few pitches to Durham, missing high and away, and walked him on a 3-and-2 pitch.

Grissom was next. The TV camera showed Millwood’s wife, Rena, fidgeting nervously in the stands. With the count at 1-and-0, Grissom swung and lofted a fly ball to medium center field. On the television broadcast, Harry Kalas blurted out, “Should be it! Should be it!” Millwood raised his arm pointing to the ball. Lieberthal raised a fist in triumph. The ball nestled in Ledee’s glove. The crowd erupted into sustained cheering, high-fiving, and bouncing up and down in the aisles as the old ballpark seemed to sway under the strain.12

Thome was first to the mound, and he embraced Millwood in a bear hug. “I saw Thome running toward me and I got a little nervous,” Millwood deadpanned .13 Millwood and Thome were soon joined by the entire Phillies squad, also bouncing up and down. A special hug was reserved for pitching coach Joe Kerrigan. As he walked off the mound, Millwood doffed his cap to the crowd, igniting another prolonged round of cheers. After descending the dugout steps and entering the clubhouse, Millwood was sent back out by Bowa, who said, “The fans want you out there. Give ’em a curtain call.”14 Millwood did, and the cheers reverberated again. Kalas provided the coda, “Everybody’s on their feet here at Veterans Stadium! What a day!”15

Six months later, the Phillies had finished third in the division, 15 games behind the Atlanta Braves. Eleven months later, Veterans Stadium was a pile of rubble. Twenty months later, Millwood was a Cleveland Indian. But for one beautiful sunny day in April 2003, the old ballpark, the Phillies, and especially Kevin Millwood shone brightly indeed.

8  “Millwood’s Masterpiece.” The “Maddux Fastball” was a reference to the kind of fastball perfected by Hall of Fame pitcher and former Millwood teammate Greg Maddux. It is a pitch that starts at a left-handed hitter and then swerves over the plate.

11 This was only Chase Utley’s fifth game in the big leagues. At this early point in his career, Utley was considered a defensive liability, so the more experienced Tomas Perez came in defensively in the seventh inning. Utley was sent back to the minors the two days later when Placido Polanco came off the disabled list.

12 This is a personal observation. From my seat about 10 rows up behind first base, the ballpark literally seemed to rock as the crowd jumped and cheered.