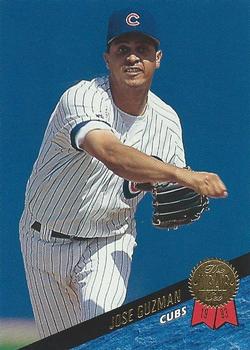 The feeling one gets approaching a major-league ballpark on the second day of the baseball season is akin to staring at a Christmas tree in January – a little melancholy and a sense that time has passed you by.

Sure, the Opening Day bunting still hangs from the second deck, but its corners seem a tad wrinkled, like a dry-cleaned shirt after a first date. Gone are the crowds, the electricity, and the sense that something exciting and new is about to be unwrapped.

But sometimes the second day of the season can offer its share of thrills and memorable moments. One such game happened on April 6, 1993, at Wrigley Field, when the Chicago Cubs hosted the defending National League champion Atlanta Braves.

The day before, more than 38,000 came out for Opening Day and saw the Braves score a first-inning run and make it stand up behind the dominance of starter Greg Maddux for a 1-0 victory. Maddux, who emerged as a star over seven seasons with the Cubs from 1986 to 1992, was making his first start in an Atlanta uniform, coincidentally against his old team, and held his old mates to only five hits in 8⅓ innings.

Another hurler was making his debut for a new team in this second game of the season, albeit with considerably less fanfare. Right-hander José Guzmán drew the start for the home team. Certainly, expectations weren’t sky-high. Guzmán had been picked up from the Texas Rangers in December after six seasons in Arlington with a mediocre 66-62 career record. His Cactus League showing hadn’t inspired much optimism either, as he finished spring training with a 6.43 ERA.

Warming up in the right-field bullpen for Atlanta before was John Smoltz. Smoltz was beginning his sixth year in a Braves uniform and only starting to show signs of his outstanding career as a 213-game winner, eight-time All-Star, 1996 NL Cy Young Award and 2005 Roberto Clemente Award winner, and 2015 Hall of Fame inductee.

Like the day before, there was scoring in the first inning. The Cubs jumped out to a lead on a Mark Grace single, scoring Rey Sánchez. The home team threatened to make it a bigger inning but left the bases loaded. Given Guzmán’s shaky spring and the Braves’ potent lineup, however, it certainly seemed that on this afternoon that a thin 1-0 margin wouldn’t stand up.

The excitement started to build as Cubs fans contemplated the franchise’s first no-hitter since Milt Pappas came within one pitch of a perfect game against the San Diego Padres on September 2, 1972, at Wrigley Field.

“I wasn’t thinking of a perfect game,” Guzmán said afterward, “but I started to think about the no-hitter in the fifth inning.”1 His thought process might have been nudged on by the defensive play of the game in that frame, when Sánchez ranged behind second base to nab a Justice grounder and throw him out with a fine scoop by Grace at first.

The next inning saw another Cubs’ defensive gem. Catcher Greg Olson led off the sixth and hit a sharp, tailing line drive toward the right-field line. Sammy Sosa, playing straightaway, had to sprint hard to his left. Sosa’s cap blew off his head but Olson’s ball flew into his glove as Sosa’s momentum took him into the side wall in foul territory.

Meanwhile the Cubs’ offense threatened but did not capitalize. The Chicagoans had a runner on third with two outs in both the fifth and sixth innings but a popout and groundout ended those uprisings.

Guzmán had set 21 Braves down in a row when Pendleton led off the eighth. The 1991 National League MVP and batting champ worked the count full, then watched ball four miss outside, ending the perfect game. Deion Sanders ran for Pendleton but was promptly thrown out by Rick Wilkins trying to steal second base. Justice followed with a walk, but Guzmán retired Bream and Olson to keep the no-hitter going.

The game moved to the ninth with everyone on their feet. Mark Lemke grounded out to Grace unassisted and pinch-hitter Francisco Cabrera, a surprise postseason hero in the previous October’s National League Championship Series, popped to third baseman Steve Buechele, bringing up switch-hitting leadoff hitter Otis Nixon with two outs.

Guzmán got ahead with a strike, but Nixon, hitting from the left side, lined the second pitch the opposite way to left for a clean single. Nixon had made the last out of the 1992 World Series but certainly made his first safety in 1993 count.

Guzmán seemed momentarily rattled by the turn of events, balking the speedy Nixon over to second base. But he recovered to get Jeff Blauser to pop up for the final out.

Guzmán’s teammates poured out of the dugout and surrounded him near the pitcher’s mound. Television and radio interviewers hustled onto the field to be in position to interview him before he hit the clubhouse. It was the last of Guzmán’s four big-league shoutouts and the next-to-last of his 26 complete games.

For his part, Smoltz gave no quarter either. He scattered six hits, struck out seven, walked only two, and through the middle part of the contest retired nine Cubs batters in order.

The Braves went on finish the season at 104-58, edging the San Francisco Giants by one game in the last pennant race before baseball realigned its divisions and added wild-card playoff berths. The Cubs limped to an 84-78 record, in fourth place, 13 games behind the Phillies. Guzmán finished 1993 with a 12-10 record and a 4.34 ERA for Chicago. The following season was his last in the major leagues.

I’ve made it a point to go to several “second-day” games over the years, confident that only a true baseball cognoscente would show up. So it was for this game, on the second day of the Cubs’ 1993 schedule, a sunny but chilly early spring day. It would be a doubleheader of sorts: The first night of Passover Seder was at my father’s house that evening.

I anticipated reading about biblical history at night. Little did I know that I would come so close to seeing baseball history in the during the day, denied at the very last moment.

My mood was a little glum in the aftermath. After the wine, the Four Questions, and the celebratory meal, my father walked over to me and asked what was wrong. “Oh, nothing,” I replied, knowing in my heart I had come so close to witnessing history but just missed out. Maybe someday I will. (Hey, if the Red Sea can be parted …)

The author used the Baseball-Reference.com and Retrosheet.org websites for general player, team, and season data and the box scores for this game.

Play-by-play information and quotes were sourced from:

The author also viewed game highlights on a YouTube video of ESPN’s SportsCenter broadcast from April 6, 1993.