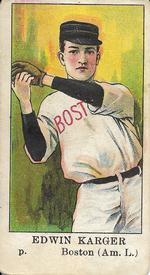 It was scorching hot, with temperatures approaching 100 degrees in the Gateway City as the St. Louis Cardinals faced the Boston Doves in a Sunday doubleheader to conclude their four-game series as part of an 18-game homestand.1 The cellar-dwelling Cardinals, with the worst record in the big leagues (26-78), had taken the first three games against their seventh-place foes (38-60), extending their winning streak to a season-high three games in what had been thus far a horrendous season. Despite the oven-like heat and oppressive humidity, Robison Field on the city’s north side was packed with 12,000 fans, the biggest crowd since a pair of twin bills in April.

The Cardinals were in a quandary. Illness forced skipper John McCloskey to miss the Sabbath-day double feature, leaving middle infielders Pug Bennet and Ed Holly to make game decisions about a woefully understaffed pitching staff. The club had little confidence in Fred Beebe, who the St. Louis Post-Dispatch contended was weak and “under weight,” and doubted that youngsters Art Fromme or Johnny Lush could take the heat.2 “Pitchers possessing the strongest of constitutions had to be selected,” continued the paper. However, the team’s best hurlers, Stoney McGlynn and Ed Karger, had started the last two games.

McGlynn persuaded the ersatz skippers to give him the starting assignment in the first contest, even though he had tossed a five-hit, 3-2 victory 24 hours earlier. That he was able to pitch was a marvel. The right-hander had broken the index finger on his nonthrowing hand in an exhibition game in Burlington, Iowa, five days earlier.3 Though not as sharp, McGlynn went the distance, and emerged victorious, 5-4, on the Cardinals’ eighth-inning comeback.

By agreement prior to the games, the second contest was limited to seven innings so that both clubs could catch a train to Boston, where they would play a four-game series. Toeing the rubber was Karger, the 24-year-old southpaw, whom the club had acquired the previous June in a trade with the Pittsburgh Pirates. A year later the Pittsburgh Press opined that the trade was one of Pirates skipper Fred Clarke’s few mistakes.4 After finishing his rookie season with an unsightly 7-19 record (5-16 with Cardinals), Karger was establishing a reputation as tireless workhorse. His stellar two-hit shutout against the Doves three days earlier improved his slate to 8-13; it was also his 34th complete game in 39 starts as a Cardinal. “The Texas boy has strength, a good head, a fine lot of speed and deceptive curve ball,” raved the Press and noted, “By many he is considered the best southpaw in the business.”5 By season’s end, Karger was widely predicted to become a star.

The heat put veteran umpire Bob Emslie “down and out,” reported the Boston Journal.6 He was replaced by two players: the Cardinals’ Fred Beebe and the Doves’ Irv Young. Fortunately, there were no close plays or incidents that required special scrutiny.

In what was described as the “most brilliant pitching stunt of the present season” by the St. Louis Globe-Democrat, Karger retired all 21 batters he faced.7 He was in complete control, snapping curves and whizzing high heaters, fanning two. He did not issue more than two balls to any batter. The Globe-Democrat noted that the Doves hit only four “easy flies” out of the infield while first baseman Ed Konetchy snared two popups and recorded the other 11 putouts on routine infield grounders.8

The Doves starter, Gus Dorner, matched Karger, holding the Cardinals hitless in the first three frames, though he issued two walks. Acquired from the Cincinnati Reds early in the 1906 season, Dorner led the majors with 26 losses (with 8 victories) in his first full season. The 30-year-old right-hander was 9-9 thus far in ’07, pushing his career record to 23-41.

Dorner showed “signs of weakening” because of the heat, reported the Boston Globe, as he took the mound in the fourth.9 According to the Globe-Democrat, he retired Shad Barry and yielded a scratch hit to Konetchy, then left the game.10 In relief came rookie right-hander Jake Boultes, who hit the first batter he faced, Jack Barnett. After stealing third, Konetchy scored on Ed Holly’s perfectly placed squeeze bunt for the game’s first run. Red Murray fanned to end the frame. [St. Louis and Boston newspaper accounts of Dorner’s statistics differ from box scores on BaseballReference.com and Retrosheet.org, both of which credit the pitcher with no hits and no runs in three innings pitched.

With two outs in the fifth, Karger singled past shortstop and moved to second on Bobby Byrnes’ single. Barry lined to right, but was thrown out trying for two bases, by which time Karger had already crossed the plate for the Cardinals’ second run.

Th Cardinals rallied again in the sixth when Burnett singled with one out and moved up a station on a wild pitch. Following Holly’s walk, Murray connected for the game’s only extra-base hit, a double to center, driving in Burnett. Art Hoelskoeter’s sacrifice fly plated Holly for the game’s fourth and final run.

Karger retired Al Bridwell, player-manager Fred Tenney, and Bill Sweeney in the top of the seventh to complete the game in 80 minutes

“It was a pity that the game was not allowed to go a full nine innings,” lamented the Globe-Democrat.11 St. Louis and Boston sportswriters agreed that Karger seemed strong enough to pitch several more innings. Nonetheless, he was credited with a perfect game, albeit a tainted, abbreviated one.

The Cardinals’ fifth straight victory was as big a news item in St. Louis as Karger’s gem and McGlynn’s ironman feat. The Post-Dispatch proudly claimed that the pitchers’ feats were proof that “the Cardinals do not belong at the bottom of the National League.”12 The Boston Herald noted that the Cardinals “had taken a decided brace” in the four-game sweep and “started East with far more confidence” than on previous road swings.13

Epilogue: The Cardinals extended their winning streak to nine games, but ultimately finished the season in the basement (52-101). One of the team’s few bright spots, Karger posted a deceiving 15-19 record with six shutouts. His 2.04 ERA was the best among left-handers in the majors, while his 29 compete games (in 32 starts) and 314 innings led all NL southpaws. He never achieved the stardom some had predicted, however. Traded to the Reds after a dismal campaign in 1908, Karger was out of the big leagues three years later with a 48-67 lifetime record (1906-1911) with four teams.

Karger’s name graced the list of no-hitter pitchers for 84 years until September 1991, when the Committee for Statistical Accuracy altered the definition of a no-hitter to include only those games that last at least nine innings and end with no hits. An estimated 36 abbreviated no-hitters were removed from the ranks, including Karger’s. Nonetheless, for one day in 1907, Karger was perfect, even if it was for only 21 outs.

5 “Clarke Made One Mistake.”

12 “M’Glynn Is a Hero and Conqueror of Boston.”