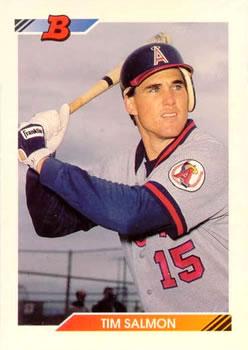 One of the California Angels’ shortcomings in 1992 was a lack of production from their cleanup hitters. As the season trudged into August and the Angels sat 12 games below .500, interim manager John Wathan thought of a new way to try to get some production from the fourth slot in the lineup—bring up the prospect who had nearly won a triple crown in the International League and put him there.

Wathan’s intent was not for the youngster to “ride in on a big, white horse,” and save the Angels from their inevitable finish toward the bottom of the American League West. Instead, he believed that the franchise’s rebuilding plan couldn’t be delayed much longer and 23-year-old Tim Salmon was the foundation.1

“He’s not here to be the California Angels’ savior and put us in first place,” said Wathan, who had been managing since Buck Rodgers suffered injuries when the team bus crashed on May 21. “I think it’s a good situation now because it gives him six or seven weeks in the big leagues, and he can get his feet wet. He certainly has nothing more to prove in Edmonton. Recently a lot of teams have been pitching around him, and still he’s been able to put up good numbers.”2

Salmon was penciled into the number 4 spot in the lineup for his major-league debut on August 21, 1992, at Yankee Stadium. During the 1992 season, the Angels used nine different starters in the cleanup spot (the most frequent being Hubie Brooks with 68 starts), and none of them were very successful. For the year, California’s cleanup hitters hit a collective .200 with 16 home runs and 74 RBIs.

And while Salmon didn’t provide an offensive boost in his debut (0-for-4 with a walk), his overall performance in California’s 9-5 victory gave management a reason to be optimistic about the future and set in motion the career of one of the catalysts on the Angels’ eventual 2002 World Series champions.

“That’s where I’ve hit all year,” said a confident Salmon, who batted .347 with 29 home runs and 105 RBIs for the Edmonton Trappers as the cleanup hitter and was one of seven Angels rookies to appear in the game. “And this is a situation where they don’t expect a lot. I’m just going to go out and do what Tim Salmon’s done all year and try to have fun. That’s what everybody is telling me, to have fun. Cleanup is where I hope to be in the future, so I guess there’s no better time than tonight.”3

And it didn’t take long for Salmon to get his chance.

Junior Felix hit an RBI double in the top of the first inning off Yankees starter Shawn Hillegas, driving in Luis Sojo to give the Angels an early advantage. Salmon followed by battling back from an 0-and-2 count to draw a walk in his first career plate appearance. Salmon never took the bat off his shoulder but showed strong plate discipline in taking four straight pitches to get on base.4

“My stomach was churning like a garbage disposal when the game started. But as soon as I stepped into the on-deck circle to await my first major league at-bat, all my nerves instantly disappeared,” Salmon wrote in his 2010 memoir, Always an Angel. “When I put the weighted donut on my bat and started taking some swings to get loose, a sense of peace came over me. I had done this before. Sure, the venues were much different, but the game was the same.”5

Two straight outs left Felix and Salmon on base, but in the second, the Angels were right back on track with Luis Polonia, Sojo, and Felix slashing consecutive RBI singles to push the lead to 4-0.

Polonia and Sojo both reached in the fourth to spur another rally, and with Salmon at bat, they pulled off a double steal—Sojo heading to second and Polonia coming home. After Salmon struck out, rookie Chad Curtis singled to right to give California a 6-0 lead and end another tough start for Hillegas, who took losses in five of six starts after pitching a shutout on July 20.

“It’s frustrating,” said Hillegas, a sixth-year veteran who was released the next day. “Right now, I don’t have an answer to what the problem is. I know I’m a better pitcher [than] what I’m showing.”6

Angels rookie starter Julio Valera had surrendered at least one hit in each of the first three innings but kept the Yankees at bay. That changed in the fourth when Mel Hall led off with a single and Charlie Hayes hit a two-out RBI double to left.

In the fifth, Don Mattingly hit a two-run home run to right-center—but not before Salmon nearly robbed him of the homer, chasing the ball all the way to the wall and getting a piece of his glove on the ball as he leaped.

“I thought I had a good bead on it, but as I reached the right field warning track and leaped, my shoulder hit the wall,” Salmon said of Mattingly’s homer. “I got my glove up barely over the fence, but because I got caught on the wall, the ball glanced off the tip of my glove and over the fence for a home run. The crowd erupted as the Yankees star rounded the bases. All I could think to myself was, ‘I almost stole a home run away from Don Mattingly.’”7

Hayes later added a two-run, two-out single to chase Valera from the game and cut California’s lead to 6-5.

Only three Yankees would reach base the rest of the game as rookie relievers Mike Butcher and Tim Fortugno closed out the victory. Butcher allowed four runs over his three previous outings, but walked just one of the five hitters he faced, while Fortugno allowed two hits and struck out three over the final 2⅔ innings.

“I was so locked in tonight and really pumped up—more emotional than in the past. I always dreamed about pitching in Yankee Stadium since I was a kid,” said Butcher, who made his major-league debut on July 6 and earned another win in New York two days later. “My dad is from Atlantic City, N.J., and he’s a Yankee fan, so I grew up a big Yankee fan. I’m really glad to get the win here. There’s so much history here.”8

The Angels backed their rookie relievers with three more runs in the top of the ninth, getting back-to-back RBI doubles from Gary Gaetti and rookie Gary Disarcina, and an RBI groundout from another rookie, Damion Easley.

“It was a good night for the young guys—one medium-young guy and one old-young guy,” Wathan said, referring to Butcher (a 27-year-old rookie who earned his first career victory) and Fortugno (a 30-year-old rookie who recorded his only career save). “I hope this is a glimpse of the future from all these guys. I hope they can hang around a long time, and I think they can if they perform as well as they did tonight. It’s fun working with kids because of the enthusiasm they have when they get to the big leagues.”9

To make room on the active roster for Salmon’s arrival, the Angels made the tough decision to release veteran outfielder Von Hayes. Hayes, a 12th-year veteran, had been acquired in a trade with the Philadelphia Phillies before the season10 but struggled over 94 games. He hit just .225 with 4 home runs but was a positive influence on the young club. He was not signed by any team for the 1993 season.

“I didn’t really see it coming.” said Hayes, who cited a wrist injury as part of his struggles. “When you’ve never been in a situation like this before, you can’t prepare for it. For 11-plus years, it’s always been the other guy. It’s regretful. I don’t know any other words for it. … I got off to a good start, but I just couldn’t keep it going. I developed some bad habits and got into situations where I wanted to go out there and work my tail off to get out of those habits, but I was dealing with some injuries that were not allowing me to do that.”11

Salmon got his first major-league hit the next day with a single up the middle against Mélido Pérez, and in the series finale, he launched his first career home run, a solo shot to lead off the fourth inning against Scott Sanderson. In 23 games with the Angels, he hit .177 with 2 home runs and 23 strikeouts, but the experience helped him in 1993, when he won American League Rookie of the Year honors.

“I think he handled himself pretty well,” Wathan said of Salmon. “He worked a walk from an 0-and-2 count and nearly caught that home run ball [by Mattingly]. I think it hit off his glove. On the strikeouts, he just got out front of some curveballs.”12

In addition to the sources cited in the Notes, the author consulted the Baseball-Reference.com, Stathead.com, and Retrosheet.org websites for pertinent materials and the box scores noted below.

9 Elliott, “Angels Get Look at Their Future.”