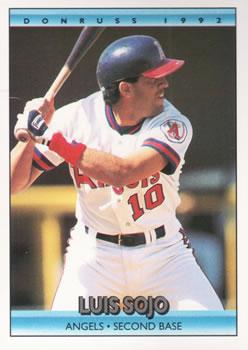 “All in all, it was not a bad first weekend in the Bronx. Looking back, I am proud of the fact that it all began in Yankee Stadium. To get your first at-bat, base hit, and home run in the same box where Joe DiMaggio and Mickey Mantle stood is pretty special.” – Tim Salmon1

Tim Salmon proved he would not be intimidated in the first few games of his major-league career in August 1992. After drawing a walk in his first at-bat at Yankee Stadium on August 21, the California Angels right fielder got his first big-league hit out of the way the next day, and in the series finale on August 23, Salmon took care of the last of the significant offensive “first” milestones, launching his first career home run.

Salmon’s leadoff fourth-inning blast off veteran right-hander Scott Sanderson sailed into the first few rows of the left-field seats to break a scoreless tie, and the Angels used a big rally in the 10th inning—including a home run by Luis Sojo, who was playing in front of his father as a major leaguer for the first time—to secure a 7-3 victory. California earned the series win over the stumbling Yankees, who hurt their own cause with two bone-headed plays in the bottom of the ninth inning and remained tied for last place in the American League East Division.

One day before his 24th birthday, Salmon also added an RBI single in the fifth and a sacrifice fly in the 10th to round out what turned out to be the best game of his 23-game trial in 1992.3 The solo shot was the first of 299 home runs Salmon hit during his 14-year career, which stood as the Angels franchise record until 2020, when Mike Trout hit his 300th homer on September 5.4

“[Salmon] looks more comfortable every day,” said interim manager John Wathan, who had been at the helm ever since manager Buck Rodgers was injured when the Angels’ team bus crashed on May 21. “It’s fun when kids contribute and come up and do what he and Damion Easley [another Angel who had made his major-league debut on August 13] have done. Neither one seems to be intimidated. They seem to be enjoying it, and they’ve done a great job for us.”5

Salmon’s homer, which was the first for the Angels since Chad Curtis hit a seventh-inning two-run shot on August 14,6 fell just inside the foul pole and traveled 311 feet. One inning later, Sojo touched off a rally in front of his parents, Ambrosio and Cristina, who were among the 28,589 fans on hand for the Sunday afternoon game. They surely were thrilled after their son singled as the second batter of the day, but his two-out double on a 0-and-2 count in the fifth proved to be a more meaningful hit.7

“I guess they bring me good luck,” said Sojo, who added that his father didn’t like the stadium experience because of the lack of replays. “I feel so excited I could do this the first time he sees me play here.”8

Sanderson was again one strike away from ending the inning, but Junior Felix ripped a single to the right side to bring home Sojo. Felix advanced to second on the throw home, then scored on Salmon’s single to left for a 3-0 lead.

Sanderson exited the game after the inning, despite throwing just 82 pitches. He was still feeling the effects of a bruised ankle he suffered in the fourth when he was struck by Ken Oberkfell’s comebacker.

In the bottom of the fifth, the Yankees finally got some offense strung together against Mark Langston, who had allowed only three baserunners to that point. Number 9 hitter Pat Kelly drew a two-out walk, moved to third on Bernie Williams’s bloop single, and scored on Langston’s second wild pitch of the game, cutting the deficit to 3-1.

One inning later, Don Mattingly was hit by a pitch and Roberto Kelly singled, but after Jim Leyritz struck out, it looked as though Langston would escape unscathed. Instead, the Yankees rallied with two outs to end Langston’s outing, getting an RBI single by Charlie Hayes, a single by Andy Stankiewicz, and a bases-loaded walk by Kelly to tie the game.

From there, offense slowed until the Yankees squandered a huge scoring opportunity in the bottom of the ninth. Pinch-hitter Mel Hall led off with a single—the first hit for either team since the sixth inning. When Kelly laid down a bunt, Angels catcher Ron Tingley made an errant throw toward second, allowing both runners to reach.

Next up was Williams, who mixed up the signals on whether he should bunt.

Williams, a 23-year-old in his 109th career game, was supposed to bunt if California’s infielders stayed back and swing away if the infielders charged in anticipation of a bunt. They charged on the first pitch from Scott Bailes, and Williams, deciphering the defensive strategy, let it sail by for a strike.

They charged again on the second pitch, but Williams showed bunt and took a second strike. Forced to defend the plate, Williams took a bad swing on the next pitch and flied out to left.9

Mike Butcher—who earlier in the day negotiated a trade with the fan who caught Salmon’s home-run ball11—relieved for the Angels to face Randy Velarde, who lined the first pitch into right field. Hall took off on contact, thinking it was a sure hit, but Salmon rushed in to make the catch. A lob throw into second completed the double play, and gave Salmon his first outfield assist.

“I’m going to have to quit making decisions,” Hall said. “I haven’t made too many good ones lately. I took off right away, but it didn’t fall in. The way [third-base coach Clete Boyer] looked at me, I knew I was basically done.”12

Yankees reliever Rich Monteleone—who had pitched for the Angels in 1988 and ’89 before being traded to New York in 199013—threw four straight perfect innings14 after taking over for Sanderson in the sixth. Easley broke California’s slump by opening the 10th with a single and moved to second on Luis Polonia’s sacrifice, bringing Sojo to the plate.

“The first time I faced him, he threw me a couple of sliders,” Sojo said of his seventh-inning at-bat against Monteleone. “Then he threw a sinker and I missed that pitch and flied to left. [In the 10th inning] I knew he would come in with a fastball because he didn’t want to walk me and face Junior [Felix].”15

Instead of lifting Monteleone before Sojo’s at-bat, Showalter stuck with him; the only available options out of New York’s bullpen were Russ Springer and Jerry Nielsen, both of whom would have been forced into a high-leverage situation in their first game back in the majors after being recalled from Triple A.16

Sojo cracked a home run to left—his first since July 23—and touched off a four-run rally for the Angels, who improved to 57-68 with the victory. Felix followed with a triple and scored on Salmon’s sacrifice fly. Oberkfell continued the rally with a double, and he came home when Gary Disarcina punched a single up the middle, finally forcing Showalter to remove Monteleone from the game after 63 pitches. Nielsen walked Curtis before inducing Tingley to ground out.

Butcher allowed a leadoff single in the bottom of the 10th but got three straight outs to record his second win of the series.

The rest of the season didn’t improve much for the Yankees, who fell to 56-68 with the loss. They won five of their next six games, but a six-game losing streak in September and losses in five of the last seven games of the season dropped New York to a 76-86 mark. The Angels were even worse down the stretch and finished the season at 72-90.

After posting tremendous offensive numbers in Triple A, Salmon was named the Pacific Coast League MVP and the Minor League Player of the Year for the 1992 season. He batted only .177 in the majors in 1992 but hit one more home run, on September 2 against the Cleveland Indians. The next season, he won AL Rookie of the Year honors and spent the rest of his career with the Angels as one of the top players in their franchise history.

In addition to the sources cited in the Notes, the author consulted the Baseball-Reference.com, Stathead.com, and Retrosheet.org websites for pertinent material and the box scores. He also used information obtained from coverage from the Los Angeles Times, San Pedro (California) News-Pilot, New York Daily News, New York Post, and New York Times, and consulted Tim Salmon’s memoir, Always an Angel.

3 For his birthday, he had two more hits in the opening game of a series at Baltimore, which the Angels won 5-2.

4 Salmon and Trout had been connected since Trout’s career began to blossom because they both have fish-related last names. Salmon was on hand the day Trout broke his record at Angel Stadium and wasn’t bitter about the mark being surpassed. “It’s time to pass the torch on to somebody in the family—another fish,” Salmon said. “It lasted 20 years, 18 days, 3 hours and 37 minutes, but who’s counting? I knew that the day they signed him to a long-term deal that was it. The only thing that would’ve kept him from doing it was going somewhere else. But without a doubt, he’s the best player of his generation and one of the best of all time.” Rhett Bollinger, “Trout Hits 300th HR, Sets Angels Record,” MLB.com, September 6, 2020, Retrieved June 8, 2022 (https://www.mlb.com/news/mike-trout-300th-home-run).

6 The homerless drought for the Angels lasted 68 innings. In 1976 the Angels went 18 straight games without a home run from May 16 to June 2. The total drought between home runs stretched to 173 innings.

7 Later in his career, Sojo would have several more memorable moments at Yankee Stadium, including appearances in World Series games there in 1996, 1999, and 2000. He was also a member of the 1998 world champions, but did not play in the fall classic.

13 Montelone was traded along with Claudell Washington in exchange for Luis Polonia.

14 On August 3, Monteleone had also pitched four perfect innings of relief, shutting down the Cleveland Indians in an 8-6 victory at Yankee Stadium.

16 Springer had been recalled one day earlier, while Nielsen was brought back to the big leagues the day of the game. Springer had made two appearances with the Yankees in April but had a 10.38 ERA, while Nielsen had made seven appearances between July 12 and August 10. (Both pitchers were traded, along with J.T. Snow, to the Angels in exchange for Jim Abbott on December 6, 1992.) Other options for the Yankees ordinarily would have been Greg Cadaret (bruised right knee) and John Habyan (stomach virus). Tim Burke went on the disabled list with elbow tendinitis before the game.