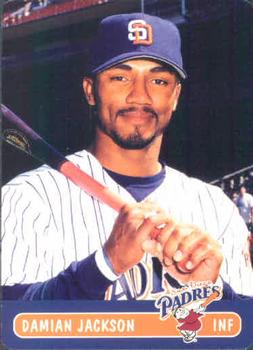 It was another beautiful, sunny afternoon in San Diego as the Padres took on the New York Mets. With Mike Hampton missing his scheduled start because of a broken rib, the Mets had to turn to long reliever Pat Mahomes to make an emergency start. The results were not good. Mahomes gave up 10 runs on seven hits in four innings as the Padres trounced the Mets, 16-1, at Qualcomm Stadium.

The Mets had played 20 games in 19 days and needed some innings out of Mahomes.

The game started out innocently enough with the Mets leadoff hitter Lenny Harris singling and stealing second, but he was left stranded on second as Padres starter Adam Eaton retired the next three batters. Mahomes retired the Padres three up, three down in the bottom of the first and Eaton did the same to the Mets in the top of the second.

Fortunately for the Padres first- and third-base coaches, they were loosened up, because they needed it. Leading off the bottom of the second, Phil Nevin lined out to right. John Mabry doubled into the gap in right-center. Mike Darr grounded out to first with Mabry taking third. With two outs, Ruben Rivera walked and stole second. Wiki Gonzalez walked to load the bases. Pitcher Eaton stepped to the plate and Mahomes needed to get out of this jam and get out of the inning unscathed. After running the count to 3-and-2, Eaton walked and Mabry scored the first run of the ballgame. Damian Jackson then sent Mahomes’ first pitch to him into the seats for a grand slam, giving the Padres a 5-0 lead. Desi Relaford flied out to center to end the inning.

Singles by the Mets’ Todd Pratt, Mahomes, and Mike Bordick in the top of the third made the score 5-1. Ryan Klesko walked to open the bottom of the third and Nevin hit a monster shot into the second deck, giving the Padres a 7-1 lead. The Mets needed their long reliever, but he was already in the game. Mabry stepped up to the plate and also homered into the second deck. Darr grounded out to second for the first out of the inning. Consecutive doubles by Rivera, Gonzalez, and Eaton made the score 10-1 before Mahomes was able to strike out Jackson and Relaford to retire the side.

Mahomes regained his composure in the bottom of the fourth and retired the Padres after a leadoff walk to Klesko.

Turk Wendell relievde Mahomes in the bottom of the fifth. A one-out single by Gonzalez and a two-out double by Jackson made the score 11-1. Wendell retired Relaford to retire the side. Mahomes’ line read: four innings pitched, seven hits, 10 runs (all earned), five walks, three strikeouts, and three home runs.

Erdos pitched through the top of the eighth without surrendering a run. Bubba Trammell singled to deep left field, but was out trying to stretch it into a double. Harris grounded out to short, Kurt Abbott walked, and Joe McEwing struck out to put an end to a mini-rally.

Down by 10 runs in the bottom of the eighth and low on pitchers, the Mets apparently threw in the towel by bring in right fielder Derek Bell to pitch. “Wearing sunglasses and looking, well, like a right fielder who was trying to pitch, Bell provided comic relief on a Tuesday that quickly turned disastrous in the 16-1 Mets loss at San Diego,” commented one of the writers covering the game.1 Bell’s first pitch was clocked at 47 mph. To avoid not messing up his arm, Bell was advised by Mets manager Bobby Valentine to throw only fastballs and changeups and to stay away from curves and sliders. He didn’t even look in to catcher Todd Pratt for signs.2 There was some risk with bringing Bell in to pitch. He had the third highest salary of the Mets’ position players behind Mike Piazza and Robin Ventura and was one of the best athletes on the team.3 But the Mets had no infielders left on the bench and Valentine did not have much of a choice. Mets general manager Steve Phillips wasn’t thrilled that Bell pitched, but understood the manager’s predicament.4

Bell gave up five runs on three hits and four walks to make the score 16-1. The big blow was a three-run double by Kory DeHaan. After Joe Vitiello popped out to short to end the inning, Bell pumped his fist and as he walked off the mound he received a standing ovation and tipped his cap to the crowd as he walked into the dugout.5 Bell’s previous pitching experience came when he pitched in the 1981 Little League World Series and while in high school. Bell had gone to Valentine in the fourth inning and told him he could pitch. Valentine told him during a mound visit that if he got tired or tried anything silly, knuckleball-throwing first baseman Todd Zeile would replace him.6

This game left the Mets (74-52) 2½ games behind the first-place Atlanta Braves in the NL East, with a 3½-game lead over Arizona in the wild-card chase. The Padres improved to 61-65 and trailed the NL West-leading San Francisco Giants by 11 games.

This game did not reflect how Mahomes’ career went: He pitched in the majors for 11 seasons with a career 42-39 won-lost record. He pitched in 53 games in the 2000 season, with five starts. This was his second year with the Mets. He had recorded an 8-0 record with the 1999 Mets, pitching 39 games, all in relief.

In addition to the sources cited in the Notes, the author also accessed Retrosheet.org and Baseball-Reference.com for player and game information.