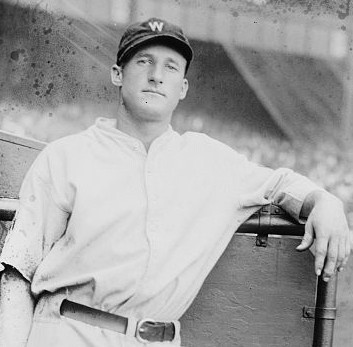 In a battle for the 1924 American League pennant, the defending World Series champion New York Yankees faced the Washington Senators in late August in the first game of a critical four-game series, played at Yankee Stadium. New York (70-52) was a half-game ahead of Washington (71-54) in the standings, attempting to reach the postseason for the fourth consecutive year. Since joining the league in 1901, the Senators had never claimed the American League flag, posting their best effort with back-to-back second-place finishes in 1912 and 1913.

An estimated crowd of 25,000 fans was treated to offensive fireworks, including “a brace of home runs by [Babe] Ruth”1 and the accomplishment of a rare feat by 23-year-old Goose Goslin. The New York Times’ account of the game led with, “Hang out the crepe and toll the funeral bells! The Yanks had a bad eighth inning yesterday, lost to the Senators, 11 to 6, and slid dolefully and silently into second place.”2

Washington threatened in the first inning, when Sam Rice doubled with two outs and Goslin walked, but Pennock retired Joe Judge on a grounder to first. In the home half of the second, Wally Pipp drove a one-out triple to center, and he scored on Wally Schang’s sacrifice fly. The lead didn’t last, as Washington responded in the top of the third. Consecutive singles by Senators player-manager Bucky Harris, Rice, and Goslin tied the game, 1-1.

Then, in the bottom of the fourth inning, Ruth led off by sending Zachary’s offering into the right-center-field bleachers near the scoreboard.3 His blow had once again given the Yankees the lead. It was Ruth’s 41st home run of the season. Bob Meusel followed by launching his seventh homer. After the back-to-back solo shots, Pipp lifted the ball to deep left, but Goslin tracked it down for the first out. Schang then singled to left and Aaron Ward also singled, sending Schang to third, still with just one out. Harris “had to drag his starter out of the box,”4 bringing right-hander Allen Russell on in relief. Russell was making his 30th appearance of the season, and he sported a 5.27 ERA. He induced Everett Scott to fly out, and with Pennock batting, Schang attempted to steal home but was caught in a rundown and retired on the ensuing 2-6-1-5-2-4 play.

In the top of the fifth, Harris drew a one-out free pass, but Pennock picked him off.5 Rice followed with a double to right, bringing up the cleanup hitter Goslin, who “bumped the ball between Meusel [in left] and Witt [in center] and made four bases inside the grounds.”6 The inside-the-park round-tripper was Goslin’s eighth home run of the season. It was also one of the few home runs “seen on these grounds without the aid of the bleachers.”7 The Senators had again tied the score, 3-3.

Two innings later, in the seventh, “after missing a gargantuan lunge at a curve ball, the Bambino drove one of Allan Russell’s pitches high and far into the bleachers.”8 Dugan, who had singled, scored ahead of Ruth, whose 42nd homer, a “blow to the sun gods’ throne in right,”9 made the score 6-3. The fans went into a frenzy as New York led 6-3. Ruth had surpassed his 1923 league-leading mark of 41 home runs.10 However, according to the New York Times, “the applause had barely died down when the Senators began working on Pennock’s slow curve and change of pace.”11

Ossie Bluege led off the top of the eighth inning for the Senators with a single and Muddy Ruel doubled to right. That was all for Pennock, who was lifted for rookie reliever Milt Gaston. Roger Peckinpaugh grounded out to short, but Bluege scored. Nemo Leibold pinch-hit for Russell and walked. Earl McNeely singled to load the bases. Harris rolled a possible inning-ending grounder to Dugan, but the third baseman committed his 16th error of the season and everyone was safe. (Ruel scored.) Sad Sam Jones now entered the game to pitch for the Yankees. Rice forced Leibold at home for the second out, keeping the bases loaded. That brought up Goslin, who drove a liner to center. Whitey Witt lost the ball in the sun, “turned his back on the ball after a side long chase and allowed the pill to get past him to the running track,”12 and with it, he lost the game for the New Yorkers. Goslin sprinted to third, clearing the bases with three runs batted in (all unearned). New York’s Daily News reported that Witt had “wrapped his arms about his head”13 on the play. Goslin was credited with a triple, as Witt never touched the fly ball.

The hit parade continued. The next four batters (Judge, Bluege, Ruel, and Peckinpaugh) each singled off Sad Sam, and the Senators had built an 11-6 advantage. Right-hander Al Mamaux replaced Jones on the mound and got Leibold to line out to right for the final out of the long inning.

Huggins had used four different pitchers “trying to extinguish the blaze.”14 When the top of the eighth inning ended, 13 Senators had gone to bat, “three Gotham pitchers were knocked out of the box,”15 and eight Washington runners had scored. More importantly, the fans were taken out of the game, as the Senators had “obscured the magnificent hitting of Herman [Ruth].”16

In the Washington ninth, with the score still 11-6, Rice singled with two outs, his fifth hit of the game. Goslin then doubled, sending Rice to third. Judge grounded out, and the Senators did not score, but Goslin had hit for the cycle. He joined St. Louis Browns slugger Baby Doll Jacobson (who hit for the cycle on April 17, 1924, against the Chicago White Sox) as the only batters to hit for the cycle in 1924.

Firpo Marberry came on to pitch the final two innings for Washington. He allowed only one hit but fanned three, including Babe Ruth “as a fitting finish to a mighty nifty victory.”17 The run-filled victory put Washington a half-game (and just two percentage points) ahead of New York in the race. Washington batters had banged out 18 hits (every position player had at least one hit), led by Rice with five and Goslin with four. The Senators had left another 12 runners on base. Every position player for the Yankees also had at least one safety, including five for extra bases. Ruth drove in half of their runs, and his two homers gave him a total of four in his last five games. Ruth had also lifted his batting average to .392. It would be 10 games before he swatted Number 43.

Goslin became just the second player in Washington Senators franchise history to hit for the cycle, attaining the feat 16 seasons after Otis Clymer’s cycle (October 2, 1908, against the New York Highlanders). The Washington Post praised Goslin’s accomplishment with, “All Goslin did to liven up the afternoon was to crash out a circuit clout, triple, double and single and to coax a walk once. Six, or over half of the Washington runs were propelled over the counting block by the Goose’s big stick.”18 In going 4-for-5 at the plate, Goslin had scored twice and knocked in six runs. He raised his batting average to .332 and his slugging percentage to .509. Goslin finished the season with 129 RBIs, best in the American League and second to the New York Giants’ George “High Pockets” Kelly’s 136 for tops in the majors. Goslin had a great series against New York. In the four-game series, he banged out 11 hits in 16 at-bats, scored five runs and drove in nine. He did not strike out.

After the game, Bucky Harris told reporters, “Watch us from now on. The Yankees will have Walter Johnson to beat tomorrow and I don’t think there is a team in the world that can beat him in the form he is in now.”19 The Nats did beat the Yanks, 5-1, behind Johnson’s six-hit performance. The Big Train earned his 18th win of the season, as Washington extended its lead over the Yankees to 1½ games. The Senators hung on to first place in the American League, going 20-8 after this match, meeting (and defeating) the New York Giants in seven games in the 1924 World Series.

3 The Washington Post reported that Ruth’s home run landed in “the bleachers in short right field, which were built especially for this purpose” (Young).

5 Officially, Harris was picked off and caught stealing.