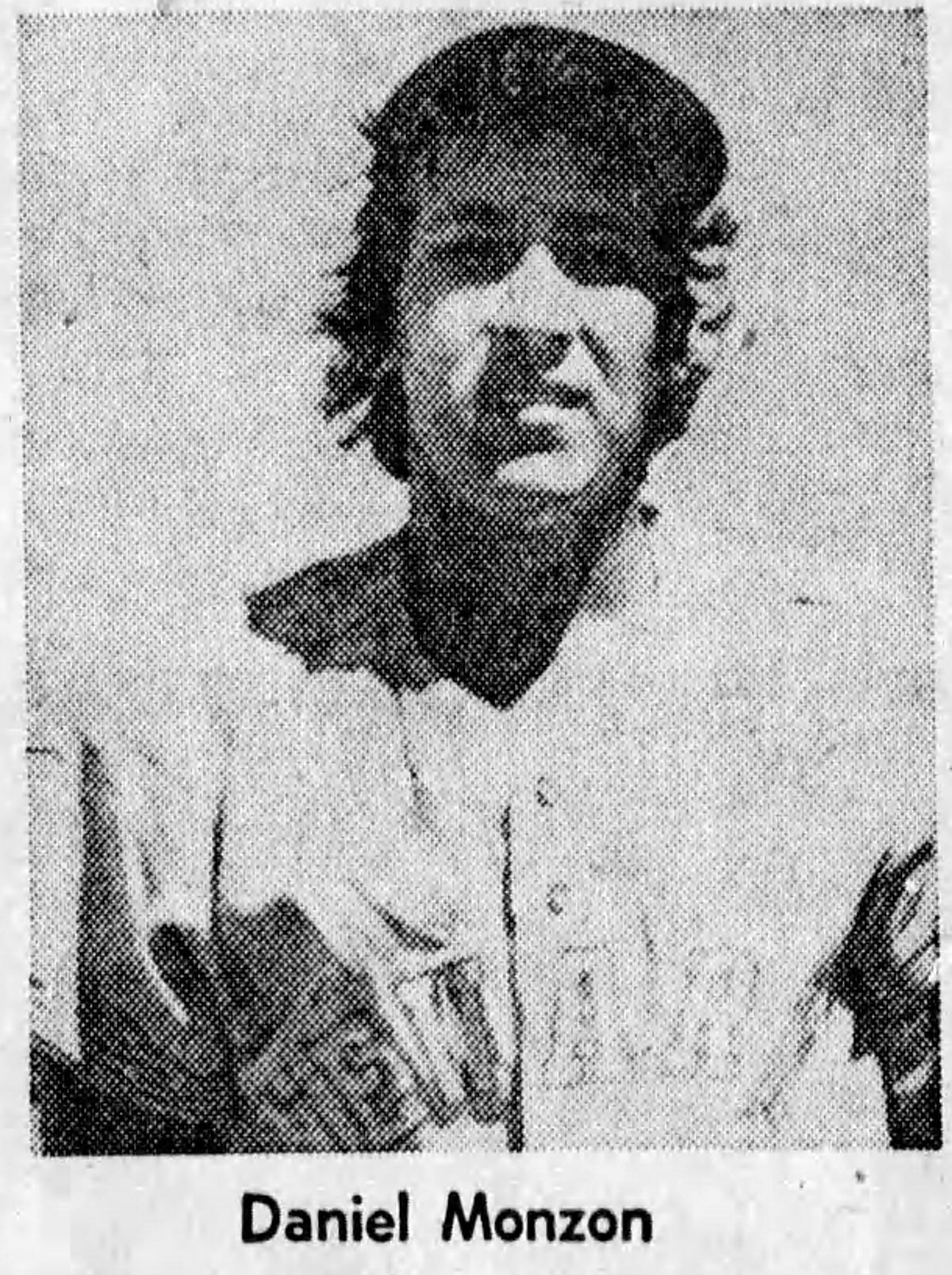 In the first minutes of Tuesday, July 13, 1976, police in the central New York State village of Newark responded to a report of a fight. They found the body of a teenage boy, shot dead, on the village’s Norton Street. The victim, 17-year-old1 Daniel Monzon,2 had come to the small town from Puerto Rico only a month before to play third base for the Newark Co-Pilots, a Milwaukee Brewers affiliate in the Class A New York-Penn League.3

Monzon’s professional career totaled seven games over 19 calendar days in June and July 1976.4 His best performance was in the second game of a doubleheader on July 10, when the young third baseman went 3-for-4 with 4 RBIs. Newark manager Tony Roig said Monzon, plagued by nerves and homesickness in the early going, was settling down and proving he had the talent to be a starter.5 Unfortunately, the game in which he blossomed was the last he would ever play.

The July 10 doubleheader matched the top two teams in the New York-Penn League. The Elmira Pioneers, a Boston Red Sox farm team, sat atop the short-season league with a 12-3 record, while Newark was three games back at 9-6.6 The two teams faced off the night before. Newark won in 12 innings, 6-5, spoiling the debut of pitcher Bruce Hurst, Boston’s first-round pick in the June 1976 draft.7

Manager Dick Berardino’s Elmira team went on to win the league title with a 50-20 record. Six of the team’s players reached the major leagues, including future Hall of Famer Wade Boggs, shortstop and future Dodgers manager Glenn Hoffman, and outfielder Reid Nichols.8 Some of the team’s best performances came from players who never made the big leagues. Outfielder Mike Ongarato tied for the league lead in hits with 81, while outfielder Carlton Steele led in stolen bases with 30. Pitcher Michael Howard led the league in wins with eight, while teammate Steve Schneck led in saves, also with eight.9

A Co-Pilots season preview in a local newspaper listed Gary Donovan, a rookie from Portland State University in Oregon, as the starting third baseman to open the year.11 But Roig penciled in Monzon to start both games of the July 10 doubleheader, even though Monzon had collected just one hit in his first five games. Roig later said he played Monzon sparingly at the start of the year to give him time to adjust to being away from home.12

The doubleheader drew 1,511 fans to Newark’s Colburn Park, where the flag flew at half-staff to mark the death of Red Sox owner Tom Yawkey the day before.13 Both games were seven innings. In the first game, Monzon collected his first RBI with a sixth-inning single that brought Newark within a run, 3-2. But Hoffman tripled and scored on a sacrifice in the top of the seventh, then started the game-ending double play in the bottom half as Elmira won 4-3. Sorensen pitched a complete game and took the loss for the Co-Pilots.14

Newark got on the board in the second inning as Vega singled, designated hitter Terry Shoebridge walked, and Monzon singled home Vega for a 1-0 lead. King and reliever Stephen Serwon surrendered three more Newark runs in the third. Holle and catcher Ron Jacobs each hit RBI doubles, and a third run scored on an Elmira error — one of six fielding miscues that day between the two teams, including one by Monzon.15 For the 20-year-old Serwon, his relief outing was his second and last professional appearance.16

Elmira scored a run in the fifth on a single by designated hitter Brad Hawkins, but Newark got the run back in the bottom half. Second baseman Elliott Franklin singled, stole second, advanced to third on a double-play ball, and scored on a passed ball to make it 5-1.17

Elmira’s bats awoke in the sixth, scoring four runs to drive out starter Bannister. Left fielder Larry Hyman began the rally with a solo home run. Two Newark errors and a walk resulted in another run, and pinch-hitter John Edwards followed with a two-run single. Reliever Gary Fritch finally shut down the rally, but Elmira had tied the game 5-5.18

Just as they had in the fifth, the Co-Pilots answered the Elmira rally with runs of their own, and Monzon both started and finished the rally. He began the inning with a groundball single, stole second for his only career stolen base, then moved around to score on two more singles.19

Reliever Tony DeLeon loaded the bases by intentionally walking Franklin to pitch to Holle — a curious move in retrospect, given Holle’s offensive dominance that season. DeLeon hit Holle with a pitch to drive in a run, then threw a wild pitch to allow another. Another walk reloaded the bases, setting up a sacrifice fly by Shoebridge. Yet another walk to catcher Jacobs reloaded the bases for Monzon, who capped the rally with a bases-clearing double to center field. Newark scored seven runs to take a 12-5 lead.20

Fritch held Elmira off the scoreboard in the seventh to get the win, while DeLeon took the loss, surrendering seven runs in his only inning of work. Bannister and Fritch held Elmira to only five hits, though they also handed out six walks. The game ended in 2 hours and 25 minutes.

The Co-Pilots’ scheduled games on Sunday, July 11, and Monday, July 12, were rained out.21 Monzon reportedly called his mother on the night of July 11 to say he was doing well and was glad to be on the Newark team.22

One can only guess whether the events that led to Monzon’s death would have taken place if the game of July 12 had been played. Court testimony told the story of what happened instead. Co-Pilots outfielder Esteban Gomez got into a physical altercation with a local man, Ramon Sepulveda, outside a grocery store in Newark. A group, including some members of the Co-Pilots, followed Sepulveda to his home, where they taunted him and broke windows. Sepulveda emerged with a rifle. Prosecutors accused him of aiming the gun and firing, while Sepulveda claimed the gun went off while others were tussling with him and he did not control it. Either way, a bullet from Sepulveda’s rifle ended the young life of Daniel Monzon. Sepulveda was convicted of second-degree manslaughter and sentenced to five years in state prison.23

Roig and Felix Delgado, the Latin American scout who signed Monzon for the Brewers, mourned him as a “nice boy” and a legitimate big-league prospect who was just beginning to shine.24 Newark’s scheduled July 14 game against Auburn was postponed in Monzon’s honor.25 When the Co-Pilots took the field at home on July 16, they observed a minute of silence and wore their blue road jerseys, as a tailor was still sewing black mourning bands onto the sleeves of their home whites.26 Monzon was buried in his hometown of Carolina, Puerto Rico, the same city that produced Roberto Clemente.

The author thanks FultonHistory.com for providing several of the news articles used in research.

2 News reports of the time do not establish any family relationship between Daniel Monzon and Dan Monzon, who played 11 seasons in professional baseball between 1967 and 1977, including appearances with the 1972 and 1973 Minnesota Twins. The Twins’ Monzon played third base in the New York-Penn League with Auburn in 1967. As of 2019, he still held the single-season league record for most putouts by a third baseman with 80, according to the 2019 New York-Penn League media guide and record book.

8 Other members of the 1976 Pioneers who reached the big leagues were pitcher Dennis Burtt and infielder Chico Walker.

10 1976 league leader information taken from the 2019 New York Penn-League media guide and record book. As of 2019, Holle’s 77 RBIs in a season were still tied for the most in league history, with Dennis Carter of Erie also reaching 77 RBIs in 1985.

16 A “Mike Serwon” is listed in news accounts as the starting pitcher in Elmira’s game of July 6, 1976, against the Auburn Phillies. Stephen Serwon’s middle initial is given as M in Baseball-Reference, and no other Serwons appeared for the 1976 Pioneers, so it appears that Serwon made his only two appearances on July 6 and 10. See “Pioneers Win 9th Straight,” Elmira Star-Gazette, July 7, 1976: 17.