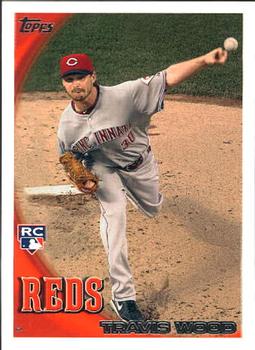 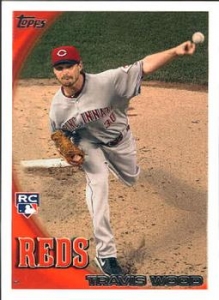 The pitching matchup for the third game of the four-game series between the Cincinnati Reds and the Philadelphia Phillies appeared to be a mismatch. It featured a 33-year-old, 6-foot-6 Cy Young Award winner with 158 wins in 13 years – including a perfect game earlier in this season – against a 23-year-old, 5-foot-11 left-hander making his third career start and still seeking his first major-league win. Despite the different résumés, each hurled nine scoreless innings before a sellout crowd of 45,347 fans before the Phillies pushed across an 11th-inning run against the Reds bullpen for a 1-0 win.

The veteran was Phillies ace Roy Halladay, who had been acquired the previous December after 12 seasons with the Toronto Blue Jays. He entered the game 10-7 with a 2.33 ERA.1 On May 29 against the Marlins, he had thrown the 20th perfect game in major-league history.2 In his previous start, against Atlanta, he had allowed just five hits in a 3-1 complete-game victory.

Halladay’s mound opponent was Reds rookie Travis Wood.3 In spring training, the Bryant, Arkansas, native had been beaten out by Mike Leake for the fifth starter spot and sent back to Triple-A Louisville.4 “I got sent down and I just went down there and got my stuff together,” he said. “Just did what I had to do to get back up here.”5

Wood had made his major-league debut on July 1 at Wrigley Field. He shut out the Cubs through seven innings but was removed in the eighth with a 2-0 lead when he walked the first two batters. The Reds bullpen allowed both to score, depriving Wood of a victory in his first big-league game. His second start was another no-decision when he allowed six hits and three earned runs in 4⅓ innings against the New York Mets at Citi Field on July 5.

The Reds entered the game 49-39 with a two-game lead over St. Louis in the NL Central Division. Philadelphia was 45-40, in third place in the NL East and 5½ games behind Atlanta. The first two games of the series had been hotly contested. The Phillies had won both in extra innings, on walkoff homers by Brian Schneider and Ryan Howard.6

Through three innings, both starters faced the minimum.7 Wood breezed through the Phillies’ lineup, striking out three. In the second, he went to three-ball counts on Ben Francisco and Cody Ransom but got both to ground out. He would not have another three-ball count until the seventh inning.

The Reds threatened in the fourth. With one out, Orlando Cabrera singled and Joey Votto walked. But Halladay retired Jonny Gomes and Jay Bruce to escape. In the fifth, Miguel Cairo8 led off with a single, but Drew Stubbs hit into a 5-4-3 double play. From there, Halladay retired the next seven Reds.

Meanwhile, Wood set down the Phillies on routine plays; the only hard-hit ball was Shane Victorino’s fourth-inning line drive that was snared by third baseman Cairo.9 Wood picked up his eighth and final strikeout when he got Jayson Werth swinging on a 3-and-2 pitch to end the seventh. The game was still scoreless, and no Phillies player had reached base.

Cincinnati’s best chance to score against Halladay came in the eighth. Cairo led off with a double on a short liner down the right-field line. Stubbs sacrificed him to third. After Ryan Hanigan struck out, Wood was the next batter.

Reds manager Dusty Baker faced a tough decision. He chose to let his young pitcher bat with two outs with a runner on third in a scoreless game. After the game, he explained: “It’s a little tough when you’ve got a perfect game. You’ve got to give him an opportunity.”10

Wood proved to be a good-hitting pitcher in the majors. He had already collected a single and triple in his two earlier starts; he ended his career with a .185 batting average and 11 homers and 37 RBIs in 298 at-bats. In Game Two of the 2016 NLDS, Wood became just the second relief pitcher to homer in a postseason game, joining Rosy Ryan of the New York Giants, who connected in Game Three of the 1924 World Series.

But in this at-bat, he struck out swinging against Halladay and the game remained scoreless.

Back on the mound for the eighth, Wood retired the Phillies in order again. Between routine popups by Howard and Ransom, Francisco made a bid to become Philadelphia’s first baserunner; he hit a hard liner, but directly at left fielder Gomes.11

In the top of the ninth, Halladay worked around a two-out single by Votto. His day was over; he had scattered five hits and struck out nine while issuing just one walk.

Carlos Ruiz, playing in his first game since June 18 due to a concussion,12 led off the bottom of the ninth and doubled into the left-center gap on a 2-and-1 pitch to end Wood’s quest for a perfect game.13

Baker was faced with another chance to replace his young hurler but again chose not to.

After pinch-hitter Wilson Valdez popped out on a bunt attempt, Raul Ibanez hit for Halladay and flied to center field. Ruiz advanced to third on the play. Wood worked out the jam by getting veteran shortstop Jimmy Rollins to foul out on a full-count pitch to first baseman Votto, who reached into the camera box to make the catch.

After dominating performances by the starters, the game was decided by the bullpens. Brad Lidge took over for Philadelphia in the 10th. Bruce led off for the Reds with a double and moved up on Cairo’s sacrifice. Stubbs walked and stole second. One out later, Laynce Nix hit for Wood and was intentionally walked to fill the bases. Lidge retired Brandon Phillips on a fly to end the threat.

Nick Masset and Bill Bray worked the 10th for Cincinnati and allowed just a single to Werth. Jose Contreras set the Reds down in order in the 11th.

In the bottom half with one out, Ruiz ripped his second double. After an intentional walk to Valdez, Bray got Ross Gload to fly out.

Baker then summoned Logan Ondrusek from the bullpen to get the third out. But Rollins lined his second pitch to right for a single score Ruiz and give the Phillies a 1-0 win – their third straight win in extra innings.14

Wood finished with the game one hit allowed in nine innings – the first pitcher to do so and get no decision since Ben Sheets on June 8, 2004.15

After the game Wood reflected on his outing: “Going into it, I felt good. Pitches were working early, and we were getting some quick outs. I didn’t know how it was going to end up. You try not to think about it a whole lot. Then you start worrying about it and trying to be too perfect. I tried to take each hitter at a time.”16

Wood had never thrown a no-hitter as a professional; he threw “two or three” for Bryant High School,17 but never a perfect game.18

Interestingly, Wood’s opponent in this game had a similar experience early in his career. In just his second major-league game, Halladay was one out from no-hitting Detroit on September 27, 1998, when Bobby Higginson homered. Halladay retired the next batter to finish with a 2-1 win. It was his first career victory.

The Phillies went on to win the NL East with a 97-65 record, six games ahead of Atlanta. The Reds finished with a 91-71 mark and won the NL Central by five games over St. Louis. The teams squared off in the Division Series and Halladay turned in a masterpiece against the Reds in Game One – he threw the second no-hitter in major-league postseason history.19

After the 2011 season, Wood was traded to the Chicago Cubs. After three years as a starter,20 he transitioned to the bullpen in 2015. The following year he posted a 4-0 record with a 2.95 ERA in 77 games and helped the Cubs to their first World Series title since 1908.

Shortly after the World Series parade in Chicago, Wood was honored with his own parade in his hometown and was recognized before the state high-school playoff football game. A street near Ashley park, where he had played as a kid, was renamed T. Wood Way.21

In February 2017, he signed with Kansas City as a free agent and spent his final season splitting time between Kansas City and San Diego. He finished his career with a 47-59 record and a 4.26 ERA, pitching 994 innings in 298 games.

The author and his wife moved to Bryant, Arkansas, in 2001. He quickly became involved as a coach in the local youth baseball program when his son began playing tee-ball in 2004. He attended two or three Bryant High School games during Wood’s final two seasons with the team, but each time Wood was playing first base rather than pitching.

The author also consulted the CSN broadcast of the game that he has on compact disc.

1 Six of Halladay’s losses had come in his last 11 starts, during which Philadelphia scored more than three runs just once.

2 It was the second in Phillies history. Jim Bunning threw the first one against the New York Mets on June 21, 1964.

3 Wood moved up to take Aaron Harang’s spot in this game when Harang was put on the disabled list after pitching against the Phillies on June 30.

6 According to the CSN telecast, it was the first time the Philies had won back-to-back games on walkoff homers since 1962. In the second game on July 9, the Phillies had rallied for six runs in the bottom of the ninth to force extra innings before winning on Howard’s two-run home run.

7 Orlando Cabrera singled against Halladay in the first inning but was erased when Joey Votto hit into a 6-4-3 double play.

8 Reds regular third baseman Scott Rolen had been the scheduled starter but was scratched before the game with a stiff back.

13 The only Reds pitcher to hurl a perfect game is Tom Browning, who beat the Dodgers 1-0 on September 16, 1988. No Reds pitcher had thrown a no-hitter since Browning.

17 In his final two seasons at Bryant High School, Wood helped the Bryant Hornets to a record of 59-10. On the mound he compiled a 19-2 record with 287 strikeouts in 139⅔ innings. BryantDaily.com.

19 Only a walk on a close 3-and-2 pitch in the fifth inning to Jay Bruce prevented Halladay from another perfect game.

21 For photos and more information on the festivities, see https://robinsonkell.wordpress.com/travis-wood-day-on-t-wood-way/.