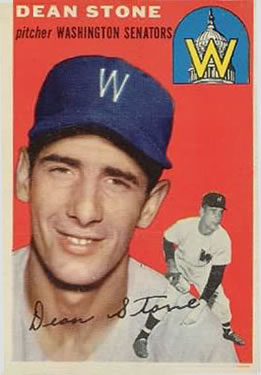 Despite five straight World Series titles, Casey Stengel had yet to manage the American League to an All-Star Game victory when he set his lineup at Cleveland Municipal Stadium on July 13, 1954.

Stengel ended his midseason drought this hot afternoon as the AL stopped a four-game NL winning streak in a record-setting slugfest. “They’ll be reminiscing about this one for years to come,” Frederick J. Lieb wrote in The Sporting News.1

Derisively referred to as the “Mistake on the Lake,” the Cleveland ballpark set several attendance records because of its massive seating capacity.2 The official paid attendance of 69,751 would have been an All-Star Game record save for the 61 more fans who attended the 1935 game in the same cavernous ballpark.3 Bleacher seats for this game sold for $1. Standing-room admission was $2. The temperature during the game reached 93 degrees.4

Yankees lefty Whitey Ford started for AL and tossed three shutout innings. Despite giving up a leadoff single, Ford retired the NL on three pitches in the second inning, thanks to a double-play grounder.5

National League starter Robin Roberts of the Phillies, making his fourth All-Star start in five seasons, was less fortunate. He yielded back-to-back homers to Cleveland’s Al Rosen and Detroit’s Ray Boone with two outs in the third. Rosen’s came with two men on base. The Cleveland slugger, who nearly won the Triple Crown in 1953,6 homered again in the fifth with a man on off the Giants’ Johnny Antonelli.

The five RBIs likely would have made Rosen the game’s most valuable player, had that recognition existed then.7 Rosen played the entire game, starting at first base before moving to his more normal third base, with a broken right index finger. He had been playing with the injury since May 25 and told Stengel someone else could start in his place. Although the commissioner gave Stengel permission to do so, the Yankees skipper kept Rosen, picked by the fans’ vote, in the starting lineup.8

After striking out with two on in the first, Rosen sat on the bench next to Ted Williams and complained that he wasn’t able to get around on pitches he should hit. Williams suggested Rosen choke up a bit.9

The four-run lead was gone before the AL came to bat again. The National Leaguers jumped on Sandy Consuegra of the White Sox for five runs in the top of the fourth. Alvin Dark of the Giants flied out before the floodgates opened. Consuegra gave up four straight singles. Jackie Robinson’s two-run double knocked the Chicago pitcher out of the game. Cleveland’s Bob Lemon got a popout before the Giants’ Don Mueller, pinch-hitting, doubled in Robinson. The NL led, 5-4. All five runs were charged to Consuegra.

The AL tied it in the bottom half on Bobby Avila’s sacrifice fly. The Cleveland second baseman was 3-for-3 with a pair of RBIs. Between them, three Indians All-Star batters — Rosen, Avila, and Larry Doby — went 7-for-8, knocking in eight of the AL’s 11 runs. The trio was instrumental in the Indians breaking the Yankees hold the pennant and winning a then-record 110 games that ’54 season.

Bob Porterfield, a 22-game winner for Washington the year before, pitched the fifth, sixth, and seventh. He yielded two runs on a two-out homer by Ted Kluszewski in the fifth to give the NL a lead again, but Porterfield left with the AL ahead, 8-7. He faced 13 batters, the most of any AL pitcher that day.

The AL had taken the lead off the Braves’ Warren Spahn, who like Consuegra was able to retire just one batter. It could have been worse. Spahn walked Ted Williams, leading off, before giving up three straight singles. Minnie Miñoso of the White Sox was thrown out at third before Spahn got a popout, but an infield single by Rosen loaded the bases. The Dodgers’ Walter Alston, managing the NL team, pulled the great left-hander for Marv Grissom, the Giants’ reliever, who got out of the inning.

The lead changed hands again in the top of the eighth, thanks to a two-run homer by Cincinnati’s Gus Bell off Bob Keegan of the White Sox, a right-hander making his lone All-Star Game appearance at age 33. Keegan’s troubles continued before he could retire the side. With two outs, Red Schoendienst of the Cardinals reached on an error when neither Miñoso nor Nellie Fox, his White Sox teammate, could catch Schoendienst’s pop fly near the right-field line. Schoendienst ended up on second. He moved to third on Dark’s infield single.

That’s when Dean Stone of the Senators got his chance. The rookie southpaw was on the All-Star team as an injury replacement for Ferris Fain of the White Sox. “He’s a young left-hander who can go the route and isn’t troubled by wildness,” manager Bucky Harris had said about Stone earlier in the season.10

“He’s just a kid,” Durocher told Schoendienst. “He might balk. I’ll draw a marker down the line and you come that far, maybe on the first pitch or two. Then if he is still watching Dark on first, go the next time.”11 Stone indeed kept an eye on Dark before pitching to Snider. As Stone was in his stretch for his third pitch, Schoendienst took off for home. Stone stepped off the rubber and quickly threw to Yogi Berra, who tagged out Schoendienst. The NL coaches claimed the pitcher had balked by failing to come to a full stop, but plate umpire Bill Stewart, who made the out call, disagreed.

In the bottom of the eighth, with Milwaukee’s Gene Conley on the mound, Doby pinch-hit for Stone and homered.12 The Cleveland slugger became the first black player to hit an All-Star Game home run.13 Mickey Mantle and Berra, stars of Stengel’s Yankees, followed with singles before Rosen walked. The Dodgers’ Carl Erskine was brought in to face Washington’s Mickey Vernon, who struck out looking at a 3-and-2 pitch, but Fox’s bloop single drove in two runs to give the AL an 11-9 lead. The runs made Stone the pitcher of record.

Virgil Trucks of the Tigers walked Snider to lead off the ninth before the Cardinals’ Stan Musial hit a hot grounder toward first base. A defensive move by Stengel paid off: He left Vernon in to play first, moving Rosen to third. “Vernon … made the game’s best fielding play in stopping Musial’s machine-gun grounder,” Lieb wrote.14 Snider advanced to second, but Vernon beat Musial to first for the out.

Trucks retired the Dodgers’ Gil Hodges on a popout to second and got the Cubs’ Randy Jackson to foul out to the catcher on a 3-and-2 pitch, earning the save. So Stone was the winning pitcher without retiring a batter or putting anybody on base.

“In many respects, it was the most spectacular of all All-Star Games,” Lieb, who had covered all them, concluded.

2 Cleveland Stadium set the marks for the biggest crowd for a single game (during the 1948 World Series) and for attendance for a season during 1948. (Both totals have since been eclipsed.)

6 Rosen led the league in home runs and RBI, while finishing second to Mickey Vernon in batting average — .337 for Vernon and .336 for Rosen.

12 The 6-foot-8 Conley, a two-sport star, won a World Series ring with the 1957 Braves and three championships with the NBA’s Boston Celtics.