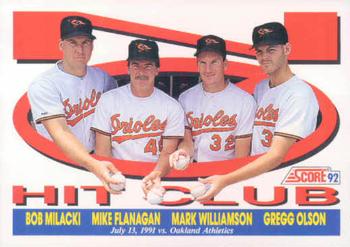 On July 13, 1991, the Baltimore Orioles celebrated “a baseball version of finding a million dollars lying in the street.”1 Four Baltimore pitchers combined to no-hit the Oakland Athletics on a Saturday afternoon at Oakland-Alameda County Coliseum, before a crowd of 40,047, in a game that was termed “downright freaky.”2

The Orioles were sitting in sixth place in the American League East, while the A’s were 3½ games out of first in the West. Bob Milacki, who had begun the 1991 season at Double-A Hagerstown, took to the mound for Baltimore against Oakland’s Eric Show, who was making his first start of an injury-plagued season. The first four innings went by in a hurry, with only Baltimore’s Randy Milligan and Mike Devereaux getting singles. In the fifth, Chito Martinez doubled for the O’s, and with Leo Gomez batting, Show had Martinez picked off but threw the ball away, and Martinez went to third. Gomez then popped out. Chris Hoiles followed with an RBI single, and Baltimore had a 1-0 lead.

In the sixth inning, Devereaux homered, giving Baltimore a 2-0 lead, then things got interesting in the bottom half of the inning. With one out, Oakland left fielder Willie Wilson hit a line drive that struck Milacki in the hand and leg. The ball rolled toward first base, where Milligan picked it up and stepped on the bag to force out the speedy Wilson. After retiring the side, Milacki left the game. He later said, “My fingers were tingling at the time. After the inning, the trainer said it would be a good idea to ice it now and not take any chances.”3 In six innings, Milacki had walked three and struck out three, but had not given up a hit. The Orioles were retired in order in the seventh, and Mike Flanagan came on to pitch for Baltimore. Harold Baines grounded out and Mark McGwire flied to Devereaux in deep center. Vance Law pinch-hit for Jamie Quirk and drew a walk from Flanagan. Terry Steinbach pinch-hit for Ernie Riles and grounded out to Cal Ripken at short.

The Orioles’ Devereaux singled in the top of the eighth, but nothing came of it. In the bottom half, Mark Williamson replaced Flanagan on the mound for Baltimore, as Oakland would be bringing right-handed hitters to the plate. Mike Gallego popped out to first, Rickey Henderson pinch-hit for Mike Bordick and grounded out to third, and Willie Wilson grounded out to second. After retiring the A’s in order, Williamson was finished. He later said, “If you look at my history against these guys, you’ll see that for me to give up one hit in an inning is doing good. When my turn was over, I just said, ‘Thank God, I’m done.’ ”4

In the top half of the ninth, Dennis Eckersley came on to face the Orioles. David Segui grounded out. Milligan and Martinez each walked, but Eckersley struck out Gomez and then Hoiles.

The meat of the order was coming up for Oakland in the bottom of the ninth, and Baltimore manager Johnny Oates called on Gregg Olson to close out the game. Olson retired Dave Henderson on a ground ball to Ripken. Jose Canseco came to the plate, having walked and struck out twice in his previous three plate appearances. Olson sent him back to the dugout on a called third strike. Twenty-six outs and no hits. Baines, the cleanup hitter and a future Oriole, strode to the plate. The ballpark was pure noise. Baines struck out swinging. The Orioles poured from the dugout rushed the field. Fans had just witnessed the 183rd no-hitter in the major leagues since the start of the 1901 season.5 Oakland skipper Tony La Russa tried to characterize the moment, saying, “I think it was kind of strange for them. Everybody congratulated different people. Nobody knew who to shake hands with. But it all counts.”6

In the clubhouse, Flanagan told the writers, “I haven’t had that many no-hit innings this year. My job was to keep the tying run from coming to the plate, and I wound [up] doing that anyway. I’m just happy for Milacki and Hoiles.”7

In 1991 there were seven no-hitters in the major leagues, tying that season with 1990 for the most ever. Nolan Ryan pitched his seventh no-hitter on May 1, and Dennis Martinez pitched a perfect game on July 28. On September 11 the Atlanta Braves also had a combined no-hitter8, using three pitchers against the San Diego Padres. The game in Oakland was only the second no-hitter thrown by four pitchers. (The first team to do it was the Athletics, in 1975.9) Milacki picked up his fifth win of the season. Show, the losing pitcher, allowed only five hits and the two runs in seven innings. In a season in which Baltimore won only 67 games, the no-hitter was a high point.

The July 13 game was the Orioles’ second combined no-hitter. On April 30, 1967, Steve Barber and Stu Miller no-hit game the Detroit Tigers. Barber pitched into the ninth inning and allowed two runs (one earned) as Detroit beat Baltimore, 2-1, without the aid of a base hit. Miller got the last out for the Orioles after Don Wert reached on a run-scoring error.

The author was present at the game. Gregg Olson, Baltimore’s 24-year-old closer, who had arguably one of the best curveballs in the game at that time, was signing autographs on the field before the contest. When I reached the front of the queue, I wished him a good game and handed him my ticket stub, which he promptly signed and said, “Thanks.”

5 This count does not include Federal League games.

8 The first combined nine-inning no-hitter in the American League was the famous Babe Ruth/Ernie Shore game on June 23, 1917, when the Boston Red Sox beat the Washington Senators, 4-0. Boston’s Ruth walked the first batter and was ejected for arguing with the umpire over his four pitches, all called balls. Shore came on, threw five warm-up tosses, the base runner was caught stealing, and Shore retired the next 26 Washington batters he faced.