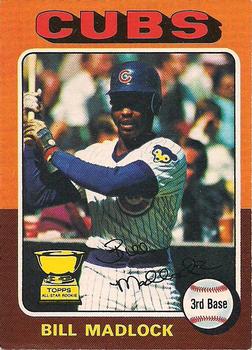 On July 15, 1975, Milwaukee’s County Stadium hosted the All-Star Game for the second time, albeit for the first as an American League park. The midsummer classic had traveled to Milwaukee in 1955 as a guest of the then-Milwaukee Braves before returning to the Cream City in ’75 as a visitant of the Brewers. Fittingly the city had the honor of bidding a final adieu to its favorite son, Hank Aaron, in what would be the last All-Star contest in the stadium’s 46 seasons, and in Aaron’s brilliant career.

A full-time designated hitter in 1975 who was having a subpar year, Aaron finished only eighth in All-Star voting among AL outfielders, but was a no-brainer selection as a reserve. When the American League reserves were introduced prior to the game, Aaron was held back near the dugout while the rest of the team took its place on the first-base line. When it was time to announce the representatives of the Milwaukee Brewers, the 51,480 in attendance rose as one and gave him a lengthy and well-deserved ovation as he trotted toward his teammates.

Having lost 11 of the last 12 All-Star Games, the American League was “thirsty for victory,” and that thirst couldn’t be “satisfied by anything coming from a glass or a bottle.”1  AL skipper Alvin Dark insisted that his pitchers wouldn’t hit, guaranteeing that he’d take full advantage of his bench’s firepower, which included popular Brewers slugger George Scott, Red Sox rookie Fred Lynn, and future Hall of Famers Carl Yastrzemski and Aaron, among others.

The National League team, piloted by Dodgers manager Walter Alston, was loaded with Cincinnati Reds — Johnny Bench, Pete Rose, Joe Morgan, Dave Concepcion, and Tony Perez — and the running joke around baseball was how in the world could the American League defeat the mighty Big Red Machine?2

Dark tabbed A’s southpaw Vida Blue to start for the junior circuit after Blue posted a 12-7 record and a 3.10 ERA at the halfway mark. Alston settled on Pirates portsider Jerry Reuss, who was 10-6 with an excellent 2.23 ERA.

Rose led off for the NL and rifled a single up the middle. Cardinals speedster Lou Brock lined out to left before Joe Morgan, dubbed “maybe the finest all-around player in the game” by announcer Curt Gowdy, dumped a single in front of center fielder Bobby Bonds, who fielded the ball and came up throwing. Rose — running, as usual, as if his hair were on fire — rounded second and headed to third, where he was tagged out for the second out of the inning. Bench popped out to shortstop Bert Campaneris in foul territory to end the threat.

Reuss had little trouble with the AL in the bottom of the first, retiring Bonds and Rod Carew, baseball’s leading hitter at .373, before hitting Thurman Munson with a pitch and then fanning Reggie Jackson.

Dodgers first baseman Steve Garvey, a write-in candidate in 1974 who won that year’s All-Star Game MVP Award and was the reigning National League MVP, led off the second and blasted a Blue fastball into the left-field seats to give the NL a 1-0 lead.

Then Jimmy Wynn, another Dodger, jumped on a hanging curveball and deposited it a few feet from where Garvey’s landed and bumped the lead to 2-0. Ron Cey, the third straight Dodger to bat, shot a single to left before Blue settled down and retired Concepcion, Reuss, and Rose to end the frame.

Reuss set down Joe Rudi and Graig Nettles with relative ease in the bottom of the second, which brought up A’s catcher/first baseman Gene Tenace. While most of the stars received polite applause from the local throng, Tenace was booed only because he had earned enough votes to be given the starting berth at first base over George Scott. Larry Eldridge of the Christian Science Monitor called the snub “the single worst injustice this year,” and fans voiced their displeasure during pregame introductions and again in the second inning.3

Tenace smashed a grounder to Concepcion, who booted the ball for the first error of the game. Campaneris singled to right field to put runners at first and second, and the crowd went wild when Aaron strode to the plate to hit for Blue. But he could muster only a broken-bat liner to Concepcion and the inning was over.

Royals righty Steve Busby took over AL mound duties and surrendered a single to Brock to begin the third. With Morgan at the plate, Busby was called for a balk on a pickoff attempt and Brock moved to second. Morgan fouled out to Tenace but with Bench at the plate, Brock stole third, and then came home when the Reds catcher lashed a hard single down the left-field line. Garvey collected his second hit with a single to left, but Busby retired Wynn and Cey to hold the NL to one run.

The score stood at 3-0 in the Nationals’ favor for the next 2½ innings. Busby and veteran lefty Jim Kaat shut the senior circuit down from the fourth to the sixth, allowing only a fourth-inning single to Concepcion, who was erased on a steal attempt. For the Americans, Carew and Jackson singled in the third, Nettles and Campaneris singled in the fourth, and Munson singled in the fifth, but Reuss and Dodgers righty Don Sutton held them scoreless.

Alston called on Tom Seaver to start the bottom of the sixth. Seaver was having a typical Cy Young-caliber season, pacing his league in wins with 13, ERA at 1.93, and strikeouts with 137, but only two days before, the Mets ace had pitched in Cincinnati and tossed 6⅔ innings in a 5-3 loss.

Seaver found himself in trouble early when Rudi singled to lead off the sixth. George Hendrick, the Indians’ lone All-Star, ran for Rudi and stole second base. Seaver fanned Nettles, but then walked Tenace to put runners on first and second with one down. Dark called on Lynn to hit for Campaneris, but he flied out to right field and Seaver was only one out away from preserving the shutout. With Kaat’s spot in the order due up, Dark sent Yastrzemski to the plate.

A 12-time All-Star to that point, Yaz was as hot as any hitter in the American League, having gone 12 for his last 23 going into the game to raise his batting average to .313. He went old school and stepped to the plate sans batting gloves or a helmet, preferring to go with just his bare hands and a cap. Seaver fired a fastball right down the pipe and Yastrzemski sent it over the right-field fence for a three-run homer that knotted the game at 3-3 and brought the deflated crowd back to life.

George Scott whiffed to end the inning and that would be the AL’s last hurrah. Catfish Hunter took over mound duties for the juniors and was effective in the seventh and eighth, surrendering only one hit. Jon Matlack was equally effective for the NL, allowing hits to Claudell Washington and Hendrick but no runs in his two innings of work.

Dark sent Hunter back out to the mound to start the ninth and that’s where the train went off the rails. Reggie Smith, who had replaced Wynn in the fifth, poled one off the end of his bat to left field and was awarded a hit when the ball glanced off the heel of Washington’s glove and fell safely. Al Oliver pinch hit for Matlack and he too picked on Washington, slicing a double over his head and down the left-field line to put runners on second and third.

Dark called on Rich “Goose” Gossage to put out the fire, hoping to get some strikeouts, but Gossage hit Larry Bowa to load the bases, which brought up Cubs third baseman Bill Madlock, the National League’s leading hitter and the eventual batting champ.

Madlock fouled off a couple of fastballs to fall behind in the count, then, after barely missing the outside corner with another fastball, Gossage threw a 2-and-2 changeup and Madlock ripped it through a drawn-in infield to score Smith. Washington fired a strike to the plate in an effort to nab Oliver, but the ball got past Tenace. Bowa advanced to third and might have scored on an errant throw by Gossage had the ball not struck third-base coach Red Schoendienst. Rose plated Bowa anyway with a fly to deep left to cap the scoring.

With a 6-3 lead, Padres southpaw Randy Jones took the hill and made quick work of the AL’s Hal McRae, Scott, and Carew to send the National League to yet another victory. Madlock and Matlack were named co-MVPs, the first time in All-Star Game history that two players shared the honor.

3 Christian Science Monitor, July 11, 1975. Eldridge theorized that Tenace benefited from having played in the previous three World Series and had name recognition thanks to his stellar performance in the 1972 fall classic. First-base runner-up Mike Hargrove had elevated vote totals thanks to one fan who voted for him more than 18,000 times. Scott was a six-time Gold Glove-winning first baseman at the time of the 1975 All-Star Game and would win two more, including the ’75 campaign. But in the first half of the season, Tenace posted a .904 OPS, Hargrove an .894 OPS, and Scott an .842 OPS. Tenace wasn’t the popular choice among Brewers fans, but he was far from an egregious choice.