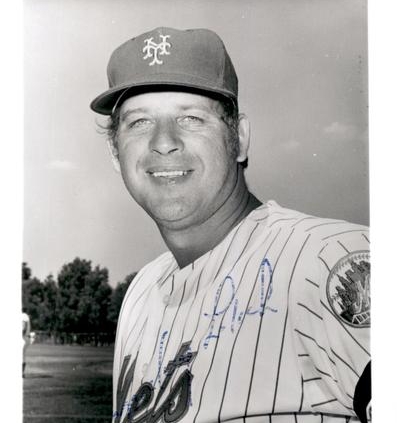 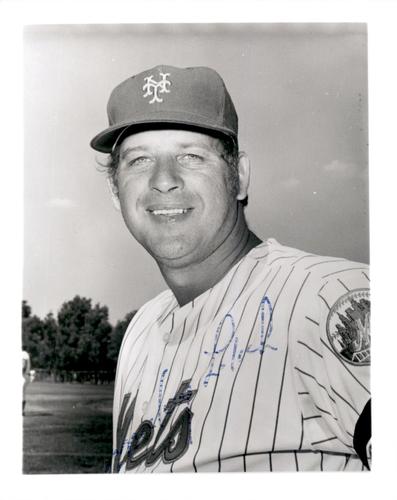 Mickey Lolich’s one-year tenure with the Mets in 1976 was about as memorable as Ivan the Terrible, a sitcom that lasted five episodes during America’s Bicentennial Summer as Lolich hurled his way to an 8-13 record.1

But there were a few bright spots for the lefty, who had come to the Mets in a four-player trade with the Detroit Tigers in December 1975 that also sent Billy Baldwin to New York in exchange for Rusty Staub and Bill Laxton.

On July 18 Lolich threw a two-hitter in the Mets’ 2-0 win over the Atlanta Braves; Jimmy Wynn and Darrel Chaney had the distinction of getting the pair of hits off the pitcher best known for winning three games in the 1968 World Series.2

But he could not rely on power to dominate the Braves.

After the game, Lolich revealed, “This was the first time I pitched in eight days and I’m used to pitching every fourth day. I couldn’t throw very hard today but my fastball was sinking. I discovered that in the middle innings, so I didn’t try to throw the ball hard and it sank better.”3

Indeed, Lolich’s performance was one of precision. He allowed no walks.

The Shea Stadium contest lasted less than two hours; more than 20,000 attendees went home with a tale about the victory that elevated the 35-year-old Lolich, for a moment, to the pantheon of pitchers who wore blue and orange. It was the second-to-last game of a five-game homestand that ended with a 2-3 record for the Mets. A week before, they split four games against the Braves on a road trip.

Chaney’s base hit happened in the top of the third, a one-out single that began a half-inning journey of worry for Mets fans. Braves hurler Carl Morton laid a bunt to second baseman Felix Millan, which advanced Chaney. Moments later, Chaney moved to third base on Lolich’s balk.

Atlanta had the top of the order ready to pounce. But Lolich atoned for his error by retiring Jerry Royster on a groundout to shortstop Mike Phillips.

New York did not score until the bottom of the third, when Roy Staiger led with a single; Lolich’s sacrifice moved him to second base. After Phillips flied to left fielder Tom Paciorek, Millan, famous for choking up on the bat, singled home Staiger. Millan had an outstanding offensive day, going 3-for-4.

Dave Kingman led off the bottom of the fourth with a solo homer, his 32nd of the season. “It was a change, down and away,” said the 6-foot-6 slugger. “I noticed before the game (Carl) Morton’s given up an awful lot of walks. That’s got to be on his mind. I was looking for something to hit, though not necessarily an off-speed pitch.”4

Mets fans got a feeling of momentum when a couple of singles by Mike Vail and Del Unser followed Kingman’s blast. Unser’s was a bunt to Braves third baseman Royster that was scored as a single. With no outs, Morton truncated the New Yorkers’ rally; Ron Hodges flied out to center fielder Wynn and Staiger hit a double-play grounder.

Morton had neither reason nor understanding for Kingman’s swat, describing the pitch as “outside six inches.” It was nearly a 430-foot homer, prompting the right-hander to state, “I don’t know how he hit it so far.”5

Wynn’s one-out single in the top of the fourth had given Atlanta its second hit of the game. After Willie Montanez made the second out — a foul out to Kingman in left field — 15 Braves consecutively failed to get on base.

With two outs in the top of the ninth, Phillips’s throwing error on a groundball allowed Rod Gilbreath to take first base. Wynn followed; Braves fans anticipated a base hit — perhaps a home run — with the slugger having a 1-for-3 day.

Lolich punctuated his performance by dismissing Mets backstop Hodges and striking out Wynn on a 2-and-2 count. “He called fastball, I shook my head,” explained the hurler. “He called inside, I shook my brains out. There was no way I was going to throw it inside.”6

Wynn became the fourth strikeout for Lolich, who revealed, “I threw him a slider outside and the bottom fell out.”7

It was just as worrisome for Mets fans that Wynn would draw a walk. He led the majors with 127 walks in 1976, his only major-league season with Atlanta. The loss came in the middle of a 3-5 road trip for the Braves; they won the second game of the two-game series with the Mets.

Lolich did not have a memorable stay in New York; he left baseball in 1977, then joined the San Diego Padres in 1978 and retired a year later, in September. The one-year residency with the Mets was a blip in his 16-year career that included a World Series ring with the ’68 Tigers and an outstanding season in 1971, when he led the major leagues in victories, games started, innings pitched, and strikeouts. His endurance resulted in leading the AL in complete games.

Three weeks before his outstanding performance against the Braves, Lolich provided another celebration for “fans who are true to the orange and blue” as the song Meet the Mets describes Mets rooters — he threw a complete-game three-hit shutout of the Cardinals on June 29.

1 The premise of Ivan the Terrible was a parody of Russian life in the Cold War. Lou Jacobi starred as the title character, a hotel waiter.