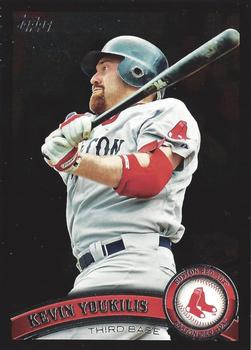 As the Boston Red Sox arrived in Baltimore for a three-game set starting on July 18, 2011, they were riding a hot streak, having won 12 of their last 14 games to reach the top of the AL East, a game and a half ahead of the New York Yankees. But as the Red Sox wrapped up their latest victory, a 16-inning, 1-0 win over the Tampa Bay Rays on Sunday Night Baseball, they learned that designated hitter David Ortiz would not be available for the series against the cellar-dwelling Orioles.

Ortiz had been given a three-game suspension for his fight with Orioles hurler Kevin Gregg in a game before the All-Star break. The slugfest came after Gregg brushed Ortiz back a couple of times before getting him to hit a popup. Gregg motioned to Ortiz, seemingly telling him to move on and run out the popup.

Ortiz took exception, charged the mound, and punches started to fly. The benches cleared, but there was little physical damage to the participants. After a league investigation, both Gregg and Ortiz received three-game suspensions (reduced on appeal from the original four), a penalty that rendered Ortiz, who said he had not been in a fight since kindergarten, bench-bound for the entire three-game series.1

Perhaps fatigued after the previous night’s marathon victory, the Red Sox got off to a slow start, going down in order in the top of the first. In contrast, in their half of the inning the Orioles scored two runs with two outs, an offensive outburst capped by Derrek Lee’s triple that followed singles by Adam Jones and Matt Wieters.

The Sox again went down in order in the second. In the bottom of the inning, the Orioles’ Felix Pie walked with one out but was caught stealing on a throw from catcher Jarrod Saltalamacchia to Dustin Pedroia at second. Robert Andino singled to center, but 44-year-old Red Sox starter Tim Wakefield, in the final season of a 19-year major-league career, got J.J. Hardy to ground into a fielder’s choice to end the inning.

The slumbering Red Sox offense — they had only five hits in 16 innings a night earlier — finally showed some signs of life in the top of the third. Saltalamacchia led off with a home run to center. After J.D. Drew flied out to center, Marco Scutaro, Jacoby Ellsbury, Pedroia, and Adrian Gonzalez all followed with singles, resulting in two more runs and putting the Red Sox in the lead.

Wakefield followed the offensive outburst with a quick one-two-three inning. The Red Sox began to put daylight between themselves and the Orioles, scoring another two runs in the fourth. The inning began with singles by Carl Crawford and Saltalamacchia, and after Drew struck out, Scutaro reached first on an error by first baseman Lee, allowing Crawford to score while Saltalamacchia wound up on third. Ellsbury’s sacrifice fly to left scored Saltalamacchia and increased the Red Sox’ lead to 5-2.

Wakefield followed with another clean inning before the Red Sox added to their lead in the top of the fifth. Josh Reddick’s two-out homer off Brad Bergeson made it 6-2.

The game swung back toward Baltimore in the Bottom of the fifth. Wakefield started the inning by striking out Pie, but the knuckleballer’s strikeout pitch got away from Saltalamacchia; Pie reached first on the passed ball. Wakefield stuck out Andino but gave up a two-run homer to Hardy, narrowing the gap to 6-4.

After Nick Markakis grounded out to first, Adam Jones followed with a solo home run that seemed to open the floodgates. Wieters and Lee singled before Wakefield walked Mark Reynolds to load the bases. Nolan Reimold doubled to left, scoring Wieters and Lee to put the Orioles ahead, 7-6.

Red Sox manager Terry Francona brought in Dan Wheeler to put the brakes on the Orioles offense. Wheeler got Pie to ground out to Pedroia, but the damage was done: Baltimore carried a 7-6 lead into the sixth.

While the sixth saw both teams go three up and three down — the only time all night that that happened — the Red Sox scratched out a tying run in the top of the seventh. Ellsbury singled, Pedroia walked, and Kevin Youkilis hit a single to left that scored Ellsbury.

Wheeler continued to shackle the Orioles, walking Lee but striking out three in the bottom of the seventh.

In the top of the eighth, Saltalamacchia led with a groundout, and then the Red Sox erupted. Darnell McDonald walked and Scutaro singled to center. Ellsbury walked, loading the bases.

The Orioles brought on Mark Worrell to face Pedroia, who greeted the newcomer with a double to deep right field, scoring McDonald and Scutaro and breaking the tie. With runners on second and third, Worrell issued an intentional walk to Adrian Gonzalez. But Youkilis foiled the strategy with a single driving in Ellsbury and Pedroia for an 11-7 Boston lead.

Chris Jakubauskas relieved Worrell and walked Reddick. Carl Crawford then singled, driving in Gonzales for the fifth run of the inning. After Saltalamacchia struck out for his second out of the inning, McDonald doubled to left, clearing the bases and putting the Red Sox up 15-7. Scutaro flied to left to end the inning.

With Randy Williams now pitching for the Red Sox, the Orioles mounted a last stand, combining singles by Josh Bell, J.J. Hardy, and Nick Markakis with two walks, a passed ball, and a wild pitch to manufacture three runs. But Williams finally set down Baltimore’s surge, getting Jones to ground out to second and striking out Wieters to strand a runner on second.

Both teams went down without incident in the ninth, with Franklin Morales striking out the side for the Red Sox to preserve the win.

In the end, the game was reflective of the firepower that had vaulted the Red Sox into the division lead. Despite the absence of their top offensive threat, they had no trouble scoring runs and in fact offered an impressive display of their hitting depth. Taking Ortiz’s place as the DH but still occupying his usual leadoff spot, Jacoby Ellsbury had stroked three hits and scored three runs. Every member of the starting lineup except for J.D. Drew got at least one hit, with six posting multiple-hit games.

Feasting on the Orioles pitching and playing before a crowd heavy with Boston partisans — whose spirit left one having to look to left field and its absence of the Green Monster to be reminded that the Red Sox were not the home team — the Red Sox showed in numerous ways why they were sitting atop the AL East standings as the calendar moved into the second half of July. After the Orioles came back to win the second game of the series, the Red Sox won the set by winning game three, ending the brief road trip on a high note. They headed back to Fenway Park and swept the Mariners en route to finishing the month of July with a 20-6 mark, their best monthly performance of the season.

But neither the level of play nor the momentum could be sustained. September saw the team dissolve, suffering what became known as the infamous “chicken and beer collapse.”2 The meltdown, seen by many observers as an indication of a lack of professionalism and discipline, led to the departure of manager Terry Francona and GM Theo Epstein, as well as a blockbuster trade in 2012 that saw Crawford, Gonzalez, and Beckett sent west to join the Los Angeles Dodgers.

As they left Baltimore, the Red Sox were riding high, but by the end of the season it had become a campaign that brought to mind Dickens’ famous lament, “It was the best of times, it was the worst of times,” but perhaps even more, the 2011 season was, as Dickens continued, “the age of wisdom, [and] the age of foolishness …”3