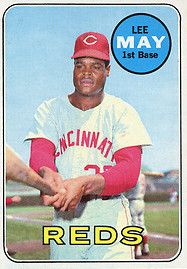 Of the Cincinnati Reds’ 18 extra-inning games in 1969, none was more dramatic than the extraordinary comeback win they accomplished on July 19. The Houston Astros appeared to have the game in hand with a 9-0 lead after their at-bat in the top of the sixth inning. But the Reds bounced back and tied the game in the eighth inning with six runs. A walk-off hit by the Reds’ Ted Savage in the 11th inning gave them their exciting victory.

With a little more than half of the season on the record books, the Reds still had thoughts of contending for the National League West Division title in the first year of divisional play in the majors. Although they were in fourth place, the Reds were only 4½ games behind the division-leading Atlanta Braves.

In a night game before 13,640 fans, Reds manager Dave Bristol started Clay Carroll, who been inserted into the starting rotation only two weeks before. The right-hander had previously appeared in 42 games as a reliever, posting an 11-4 record and a 2.76 ERA, but blew nine save opportunities. He had quality outings in each of his previous three starts. Astros manager Harry Walker countered with left-hander Denny LeMaster, who came into the game with a 7-10 record, having lost his three previous decisions.

The Reds’ starting lineup was without catcher Johnny Bench and outfielder Alex Johnson, both of whom had been recalled for military reserve duty. Bristol only found out about the situation from Reds general manager Bob Howsam an hour before the game.1 Ted Savage was Johnson’s replacement in the starting lineup.

A walk to Curt Blefary and consecutive doubles by Johnny Edwards and Doug Rader got the scoring started for the Astros in the top of the second inning. Edwards scored and Rader went to third on a grounder by Jesus Alou. Pitcher LeMaster executed a squeeze bunt that scored Rader, giving the Astros a 3-0 lead.

Carroll struggled again in the top of the fourth inning. With one out, he gave up a single to Edwards and a double to Rader, his second of the game. An intentional walk to Alou loaded the bases, and pitcher LeMaster struck out. A walk to Sandy Valdespino scored Edwards, and Julio Gotay singled to score Rader. After Carroll walked Jim Wynn, scoring Alou, he was replaced by Jim Merritt, who gave up a single to Denis Menke that scored Valdespino and Gotay, making the score 8-0.

Al Jackson came in to pitch for the Reds in the top of the sixth inning. A walk to Valdespino and singles by Wynn and Menke advanced Valdespino home for the Astros’ ninth run.

LeMaster had held the Reds in check for the first five innings, allowing four singles and two walks while fanning six. The Reds got on the board with two outs in the bottom of the sixth, when LeMaster served up Lee May’s 29th home run of the season.

Jackson retired the Astros in order in the top of the seventh. With a comfortable 9-1 lead, LeMaster took the mound again in the bottom of the frame. With one out, he gave up a double to Pat Corrales, a single to pinch-hitter Jim Beauchamp, and a walk to Pete Rose to load the bases. Skipper Walker brought in right-hander Jim Ray. After striking out pinch-hitter Fred Whitfield, Ray yielded a single to Bobby Tolan that scored Corrales and Beauchamp, making the score 9-3. Ray finished the inning with another strikeout.

When Houston’s Camilo Pascual entered the game in the top of the eighth to relieve LeMaster, Bristol juggled his defense to mitigate his roster shortage. Rose moved to second base, Tommy Helms to shortstop, Savage to right field, and Beauchamp to left field. Pascual retired the side, yielding only a single to Valdespino.

The Reds battled back in the bottom of the eighth, striking for six runs to tie the game. Ray opened the inning with a strikeout, but gave up a solo home run to Savage. After a walk to Helms and a single to Beauchamp, Rose hit a double off the center-field fence that scored both. Skip Guinn replaced Ray and walked pinch-hitter Jimmy Stewart. Tolan smacked a three-run homer that tied the score, 9-9. Walker called on his big stopper, Fred Gladding to replace Guinn, but by this time it was too late. Gladding finished the inning without any further damage.

In the top of the ninth, Pascual was replaced on the hill by his former Washington Senators and Minnesota Twins teammate, Pedro Ramos. Bristol played “musical chairs” with his fielders again. He inserted Darrel Chaney at shortstop, taking Beauchamp’s slot in the batting order. Rose went to right field, Helms returned to second base, and Savage moved back to left field. Ramos allowed the Astros a hit and an intentional walk, but otherwise got out of the inning unscathed.

Gladding and his replacement, Jack Billingham, shut down the Reds in the ninth and 10th innings respectively. The Astros’ Ramos retired the side in order in the 10th and 11th.

Billingham started the bottom of the 11th inning by giving up a single to Tony Perez. Manager Bristol initially gave the next batter, Lee May, the bunt sign, but then reversed his decision, even calling a timeout to make sure May was aware the bunt play was off.2 May indeed got the message and hit the first pitch off the center-field wall, sending Perez to third.

Reds coach Jimmy Bragan held May at first base because he believed Astros center fielder Jim Wynn might throw him out at second. It turned out to be a fortuitous decision by Bragan for a different reason. It avoided a likely intentional walk to the next batter, Savage, who became the hero of the game when he delivered a walk-off line drive over the head of right fielder Alou, who had been drawn in with the rest of the outfielders. The hit scored Perez for the Reds’ comeback win.3

After the game, Savage downplayed his accomplishment, “I ain’t no hero. These guys make you want to hit. It embarrasses you if you don’t.” Bristol reflected, “It wasn’t a good play to have May bunt. You can’t revert to the book all the time. You’ve got to do what you think is right and I had a hunch.”4

Ramos claimed his third win of the season, while Billingham took his fifth loss. Carroll, who gave up eight earned runs in 3⅔ innings, returned to the Reds’ bullpen for the remainder of the season.

The hitting stars besides Savage were May who had four hits, including the home run that first put the Reds on the scoreboard, and Tolan, who drove in five runs on a three-run home run and the two-run single that tied the score in the eighth inning.

While the Reds’ 10-run comeback was indeed impressive, it was not the largest deficit overcome in a major-league comeback win. On June 15, 1925, the Cleveland Indians led the Philadelphia Athletics 14-2 and 15-3, and had a 15-4 advantage in the middle of eighth. The A’s turned an 11-run deficit into a 17-15 win. On August 5, 2001, the Seattle Mariners led the Cleveland Indians 14-2 in the top of the seventh inning. The game went into extra innings tied, 14-14, and in the 11th inning Jolbert Cabrera singled home Kenny Lofton for a 15-14 Indians win.5

The Reds did eventually land in first place in the NL West, for 15 days in August and two days in September, but fell back to third place at the end of the season, four games behind the Braves. With a number of key position players returning from the 1969 team (Bench, Rose, Perez, May, Tolan, and Helms), the Reds won win the pennant in 1970, in what became the beginning of the “Big Red Machine” dynasty of the early to mid-1970s.