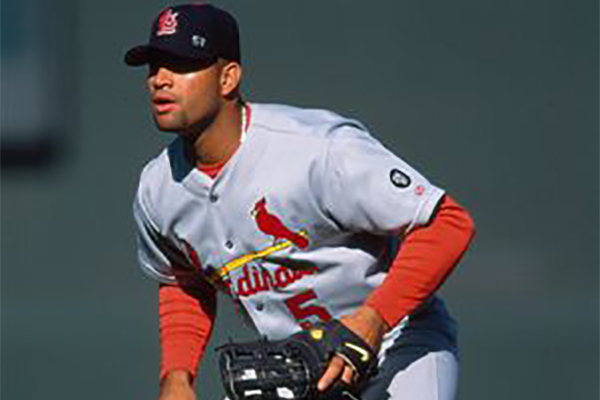 After falling one game short of the World Series in 2003, the Chicago Cubs upgraded their team, adding starting pitcher Greg Maddux, relief pitcher LaTroy Hawkins, and first baseman Derrek Lee. They came into the season as favorites to win the NL Central Division in 2004. Sports Illustrated even picked the Cubs to win the World Series.1 The St. Louis Cardinals, meanwhile, were projected to finish a distant third in the division behind the Cubs and Houston Astros. Yet, in mid-July, going into the final two games of the regular season between the Cubs and Cardinals, St. Louis led the second-place Cubs by eight games, in large part due to the stellar first-half play of first baseman Albert Pujols and third baseman Scott Rolen and a steady pitching staff.

In the first game of the series, on July 19, Rolen hit a tiebreaking home run in the eighth inning to give St. Louis a 5-4 win and extend the Cardinals’ lead over the Cubs to nine games. It was a testy affair, with the benches clearing after Cubs pitcher Carlos Zambrano hit Cardinals outfielder Jim Edmonds.2

On a sunny Tuesday afternoon at Wrigley Field, the Cubs and Cardinals faced off for the final time in the 2004 regular season. Glendon Rusch started for Chicago, taking the place of Mark Prior, who was scratched from the start. Rusch came into the game with a 3.77 ERA, including 7⅔ one-run innings against St. Louis on May 23. His strong start to the 2004 season was surprising: Rusch had posted a 6.42 ERA in 2003 with the Milwaukee Brewers and did not start the year in the Cubs rotation. Matt Morris started for the Cardinals. Morris, expected to be the St. Louis ace, was in the midst of a rough campaign. Though he won 15 games, he posted a 4.72 ERA and gave up 35 home runs.

In the top of first, leadoff man Tony Womack walked and went to second on a sacrifice. In stepped Pujols, who hit a hanging curveball into the left-field corner for a double that scored Womack. In the bottom half, Morris threw behind Corey Patterson, one game after the teams nearly scuffled, prompting a warning from home-plate umpire Tim Tschida. Speaking after the game, Morris said: “A lot of stuff happened last night. I had to stick up for my team, get the warning out early. … It was a little bit of a slip, but I didn’t let it slip too far.”3 Morris retired the Cubs in order on 13 pitches with two strikeouts, and Rusch retired the Cardinals one-two-three in the second.

After a leadoff walk to Moises Alou in the Chicago second, Lee smacked a two-run home run. Aramis Ramirez doubled and Michael Barrett hit the second two-run homer of the inning, running Morris’s league-leading total to 26. After giving up three more runs, Morris was pulled for Cal Eldred. In 1⅔ innings, Morris gave up six hits and seven runs. He left with St. Louis trailing 7-1. The teams traded solo home runs in the third. Pujols hit his first of the game, and Ramirez homered off Eldred to make it 8-2.

The Cubs maintained the 8-2 lead going into the sixth. Pujols and Rolen led off the inning with singles, bringing up Edmonds, who singled, driving in a run and making the score 8-3. Rusch’s day was done. Baker brought in Francis Beltran, who had swing-and-miss stuff but could be wild.4 Unfortunately for the Cubs, Beltran was wild in this game: He walked Reggie Sanders to load the bases and then walked Mike Matheny, forcing in a run. So Taguchi hit a chopper to the pitcher that deflected off Beltran’s glove and settled in front of the shortstop, bringing in another run. Baker replaced Beltran with Kent Mercker, who allowed a sacrifice fly by Ray Lankford to pull St. Louis within two runs at 8-6. Kyle Farnsworth entered for Chicago in the seventh and served up a home run to Pujols on his first pitch. Kiko Calero pitched two scoreless innings for St. Louis, leaving the score 8-7 going into the eighth.

Facing Farnsworth with one out in the top of the eighth, So Taguchi hit a 3-and-1 fastball into the left-field bleachers to tie the game. The power from Taguchi was stunning — the light-hitting reserve outfielder hit only 19 home runs in his eight big-league seasons. Pujols said Taguchi’s home run was the biggest of the day.5 Farnsworth got out of the eighth, and Ray King pitched a one-two-three inning for St. Louis.

With the game tied, Baker brought in LaTroy Hawkins for the ninth. Due up for the Cardinals were their three All-Stars: Edgar Renteria, Pujols, and Rolen. On the first pitch from Hawkins, Renteria hit a bouncer that shortstop Alex Gonzalez couldn’t handle. Up next was Pujols, looking for his second five-hit game of the season. On the second pitch, Pujols drove a fastball into the right-field basket for his third home run of the day to give St. Louis a two-run lead. “[He is] something else,” Cardinals radio announcer Mike Shannon proclaimed as Pujols rounded the bases. Two batters later, Reggie Sanders added the fifth home run of the day for the Cardinals, pushing the lead to 11-8.

In the middle of the ninth, Hawkins lost his composure. He started yelling at umpire Tschida as he walked toward the dugout. After Tschida ejected him, Hawkins had to be restrained by Baker and other coaches from going at Tschida. The coaches forced an irate Hawkins into the dugout. “Do I regret it? No,” Hawkins said after the game, asserting that he had a feud with Tschida running two years.6

Cardinals closer Jason Isringhausen entered the game to pitch the bottom of the ninth. He walked Patterson, gave up a single to Alou, and walked Lee to load the bases for Aramis Ramirez with two outs. With the crowd of 39,371 standing, Isringhausen delivered a first-pitch ball and a second-pitch strike to Ramirez. On the third offering, Ramirez hit a soft fly ball to center field that Edmonds caught to end the game. After a scare, Isringhausen had earned his 24th save. The Cardinals now had a 10-game lead over the Cubs.

Pujols, who entered the league in 2001 as an unheralded 13th-round draft pick, had already been a two-time MVP runner-up and batting champion and posted three seasons batting .300 with 30 home runs, 100 runs scored, and 100 RBIs. Thus, it was something when Pujols called this game, in which he went 5-for-5 with three home runs and five RBIs, the best game of his young career.7 “It’s one of those days you never forget,” said Pujols. “You’re playing against your rival. I don’t think we ever thought we were going to have a [division] lead like this.”8 In postgame remarks, Cardinals manager Tony La Russa compared Pujols’ desire to win and selflessness to that of Cardinals legends Stan Musial, Lou Brock, and Red Schoendienst.9

Pujols was the top star, but the Cardinals’ comeback was a team effort. In relief of Morris, Cal Eldred, Kiko Calero, Ray King, Steve Kline, and Isringhausen combined to allow one run in 7⅓ innings. So Taguchi made a fabulous catch in the ivy and hit the tying home run. Six Cardinals drove in runs, seven scored runs, and eight had hits. Cubs skipper Dusty Baker recognized the strength of the Cardinals, saying, “I guess at this point, it looks like we’d rather not play them anymore.”10

Although the Cardinals had established themselves as a better team than the Cubs, there was little time to bask in the victory. “We’ve got [Victor] Santos and [Ben] Sheets waiting,” said La Russa, mentioning two Milwaukee pitchers St. Louis was scheduled to face in its next series. “If that doesn’t sober you up, nothing will.”11

1 This prediction was made in the April 5, 2004, Sports Illustrated.