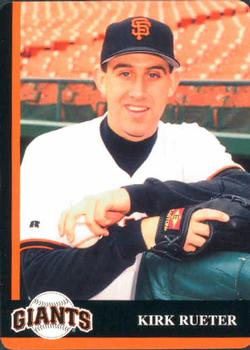 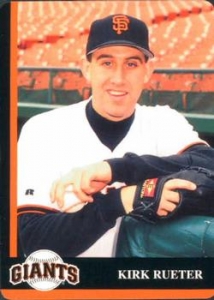 When he took the mound at Montreal’s Olympic Stadium on July 28, 1998, San Francisco’s Kirk Rueter was once again back where he started. Five years earlier, in his major-league debut for the Expos on July 7, 1993, the then 22-year-old left-hander had burst onto the scene by hurling 8⅓ innings in a 3-0 home victory against the San Francisco Giants.

He finished the 1993 season with an 8-0 record with a 2.73 ERA in 14 starts, helping the young Expos to a 94-68 record and a surprising second-place finish in the NL East. Over the next three seasons, splitting his time between Montreal and the minors, Rueter compiled a 17-12 record with the Expos until his trade1 to San Francisco on July 30, 1996. In 1997 he began a long tenure as a steady presence in the Giants’ rotation, finishing with a 13-6 record and a 3.45 ERA.2

Rueter had faced his former team four times as the second anniversary of the trade approached in July 1998. At San Francisco, he won both outings with solid starts in which he allowed just two earned runs in 13 innings. It was a different story in Montreal, where he allowed 8 earned runs in 10 innings but escaped with two no-decisions.3

Rueter’s fifth career start against the Expos occurred in the familiar confines of Olympic Stadium but ended in a somewhat unfamiliar place – on the mound for the final out. The Giants’ 7-1 win was just the third complete game of Reuter’s career in 116 starts and his first in almost three years.

San Francisco arrived in Montreal for the first game of a 10-game road trip with a 56-49 record and in second place in the NL West, 13 games behind San Diego. They were just 4-12 since the All-Star break, but still only three games behind Chicago in the wild-card chase. Montreal had lost 10 of its last 11 games and limped home to start a 13-game homestand with a 40-65 record. The Expos were fourth in the NL East, 29 games behind Atlanta. Despite pleasant weather, just 9,543 fans turned out for the Tuesday night contest.

Vazquez began the game by retiring the Giants in order in the first, including strikeouts of Bill Mueller and Barry Bonds.

After getting Orlando Cabrera to fly to center to start the bottom of the first, Rueter gave up an infield single to Terry Jones but held the Expos scoreless; he would not allow another hit until the final inning.

The Giants threatened in the second. Jeff Kent and J.T. Snow walked to start the inning, but Stan Javier grounded into a 4-6-3 double play and Rich Aurilia struck out swinging. In the fourth inning they stranded two more. Mueller led off with a walk and advanced to second when Snow reached on a two-out infield single; but Javier grounded to second to end the inning.

The Expos took a 1-0 lead in the bottom of the fourth. After retiring eight straight batters following Jones’s single in the first, Rueter issued free passes – his only two walks of the game – to Jones and Mark Grudzielanek to start the inning. Jones advanced to third on Vladimir Guerrero’s fly to right and then scored on Shane Andrews’ sacrifice fly to right field.

San Francisco knotted the score at 1-1 in the sixth. Darryl Hamilton started the inning by lining a single to right field; he moved to second with one out when Vazquez hit Bonds with a pitch. Kent followed with a single off third baseman Andrews that allowed Hamilton to score from second base and Bonds to take third. Snow grounded into a double play to end the inning.

An inning later, a five-run outburst by the Giants blew the game open. Javier led off with a walk. After Aurilia lined out, Javier was caught stealing. Brent Mayne then doubled to center to bring Rueter to the plate.

Giants manager Dusty Baker decided against pinch-hitting for his pitcher, saying later, “Who would I bring in to throw any better than Rueter? If he had been struggling on the mound it would have been a different story.”5

Baker’s decision worked out when Rueter bounced the first pitch he saw back over the mound to score Mayne.6 It was his first RBI of the season.

“I kept looking back to see if a pinch hitter was coming,” Rueter admitted after the game.7 “I didn’t know if I was going to hit but Dusty waved me up there so I was just looking to put it in play. Luckily, it bounced up the middle for me and got us in the lead.”8

Montreal manager Felipe Alou replaced Vazquez, bringing in Steve Kline, who gave up a single to Hamilton and a two-run double to Mueller before hitting Bonds (his second HBP of the game). Miguel Batista replaced Kline but struggled with his control; while issuing a walk to Kent, he uncorked two wild pitches that scored Mueller and then Bonds. He finally ended the inning with a strikeout of Javier.

San Francisco picked up its final run in the eighth when Rueter doubled off Shayne Bennett with two outs – his first extra-base hit in 213 career at-bats9 – and scored an unearned run when Montreal left fielder Robert Perez made an error on Hamilton’s single to left.

Entering the ninth, Rueter had allowed just the first-inning single to Jones and had retired 15 consecutive batters after his walk to Grudzielanek in the fourth. Cabrera ended both streaks with a line-drive single to center field on the first pitch. After getting Jones to pop to right field, Rueter finished the game by getting Grudzielanek to bounce into a 4-6-3 double play.

The win improved Rueter’s record against his former team to 3-0. The 103-pitch gem was his first complete game since August 27, 1995. Coincidentally, as a member of the Expos on that date, he had beaten San Francisco 1-0 at Olympic Stadium, allowing just a third-inning single to Kirt Manwaring. It turned out to be the only shutout of his major-league career.

After the game, Rueter received praise from both managers.

“He kept focused and minimized his pitches,” said Baker. “He got a number of first-ball and second-ball outs. He hit, he ran, he did everything. It was Kirk Rueter’s day.”11

Reuter admitted that he enjoyed pitching in Montreal again. “I like the mound. I like pitching in this park. It’s a pitcher’s park – if you can keep the ball away from down the lines.”12

“I don’t think you can consider me a big complete-game pitcher, but I can sneak one in there every once in a while. It’s always nice to go out and get nine innings in any time you can do it and it feels pretty special to come back here to Montreal.”13

Rueter was quick to give credit to his catcher, Mayne. “Mayner did a great job sitting on the outside of the plate. I was just trying to hit his glove and he did a great job when I got ahead of the hitters. He did a great job going further out and we got a few groundballs that way.”14

Rueter stayed with Giants for the remainder of his career. He threw just one more complete game in his career, a 10-1 win over the Colorado Rockies on June 29, 1999.

On April 11, 2000, Rueter started against the Dodgers in the first game at San Francisco’s Pac Bell Park; he allowed the park’s first homer, to Kevin Elster,15 gave up four runs in six innings, and took the loss.

Rueter won Game One of the 2002 NLCS against the St. Louis Cardinals, despite giving up five runs in five innings, helping the Giants to the World Series for the first time since 1989. He pitched better in the World Series against the Angels – a six-inning start in Game Four and four innings of scoreless relief in Game Seven – but it was not enough as the Giants lost the Series.

Rueter’s final win with the Giants came on May 13, 2005, at Houston, when he went seven innings, allowing just a single run. The victory gave him 105 with the Giants, one more than Mike McCormick,16 making him their winningest left-hander since they moved to the West Coast for the 1958 season.17

This game was the seventh of 10 games that the author and his father attended as part of a Jay Buckley baseball tour. The 10-day trip included games in Milwaukee (doubleheader), Pittsburgh, Baltimore, New York (Yankees), Boston, Montreal, Toronto, Detroit, and Chicago (Cubs). Also included was a day at the Baseball Hall of Fame in Cooperstown, a tailgate party at County Stadium, and free time for shopping and sightseeing in Baltimore, Boston, Montreal, and Toronto. This was his only game at Olympic Stadium.

1 Rueter was traded with Tim Scott for pitcher Mark Leiter.

6 Rueter’s hit can be seen on YouTube beginning at the 10:40 mark: https://www.youtube.com/watch?v=91IjVdip0XE.

9The only active player at the time with a longer streak from the start of his career was Frank Castillo, who had 36 singles in 327 career at-bats. Associated Press, “Rueter’s Two-Hit Complete Game Leads Giants Past Expos,” Ukiah (California) Daily Journal, July 29, 1998: 7.

10 “Montreal No Match for Giants’ Rueter and Masked Accomplice.”

11 “Montreal No Match for Giants’ Rueter and Masked Accomplice”

14 “Montreal No Match for Giants’ Rueter and Masked Accomplice.”

15 Elster homered again off Rueter in the fifth inning and against Felix Rodriguez in the eighth.