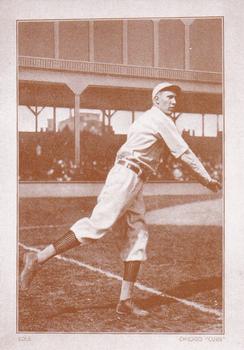 “The locals really were outclassed,” lamented the St. Louis Star about the Cardinals’ twin-bill loss to the Chicago Cubs.1 Following his teammates’ victory in the opener, rookie King Cole “had his speed and his drop broke almost perfectly,” per Chicago’s Inter Ocean, holding the hosts hitless in a game called after seven innings so that both teams could catch a train for New York City.2 Cole’s no-no featured two peculiarities: The home team batted first and the Cubs capitalized on a deceptive fielding play at a critical junction.

Player-manager Frank Chance’s first-place Cubs (57-30) were on a roll as they prepared for the Sunday doubleheader in the Gateway City to complete a six-game set at the front end of a 20-game road trip. In search of their fourth pennant in five years, the North Siders had won 13 of their last 15 games to increase their lead over the New York Giants to six games. While the St. Louis Post-Dispatch opined that “Chance’s men seem to have all the requisites needed to bring that club into the world’s championship port again,” the newspaper dismissed its city’s NL ballclub as a “disappointment.”3 Nonetheless player-manager Roger Bresnahan’s sixth-place Cardinals (39-50) surprised the Cubs with an eight-run, sixth-inning explosion to win the first game of the series, but lost the next three to begin what would eventually become a 13-game losing streak.

On a gorgeous Sunday afternoon with temperatures in the mid-80s, a near-capacity crowd of 20,000 spectators packed Robison Field, the Cardinals’ wooden ballpark, located at Natural Bridge and Vandeventer Avenues in the north side of the city. The crowd’s “only satisfaction,” quipped the St. Louis Globe-Democrat, was seeing the Cubs for the last time in the park that season.4

Before the first game’s 1:30 start time, both teams had agreed to end the second contest promptly at 5:00 so that they could board the same train at Union Station en route to New York, where the Cubs would play the Giants and the Cardinals would take on the Brooklyn Superbas.5

Mordecai “Three Finger” Brown was the star in the first game, belting two triples and scattering seven hits in a 9-3 victory.

The big crowd became restless during the 15-minute intermission between games. According to the Globe-Democrat, fans “swarmed upon the field forcing ground rules to be in vogue.”6 Given the park’s cavernous dimensions, including 441 feet in dead center, fans on the field posed a limited imposition.7

Spectators were undoubtedly confused when the visiting Cubs trotted onto the field to start the second game. “Possibly to hasten the getaway the home team batted first,” reported the Chicago Tribune; in any case, the decision appeared to concede that the Cubs would probably be leading by the predetermined end time.

King Cole set down the Cardinals one-two-three in the opening frame. The 6-1, 170-pound right-hander had been “great help to Chicago this season in keeping Chance’s machine galloping,” reported the Globe-Democrat.8 After tossing a shutout in his major-league debut in the final game of the previous season, Cole had emerged as a dependable starter and entered the game with a 9-2 slate.

Coming off a five-hit shutout in his last outing, Cole continued his groove against the Cardinals. St. Louis and Chicago newspapers agreed that the 24-year-old hurler did not yield the semblance of a hit and mesmerized his opponents with a combination of heaters and breaking balls. “Cole’s wonderful work took the hope out of the Cardinals,” declared the Post-Dispatch.9

On his way to the second-most walks among NL pitchers (130), Cole exhibited some wildness and walked four batters in the game. In addition, a “couple of fast double plays kept him out of trouble,” noted sportswriter Charles Dryden of the Chicago Examiner.10 One of those twin killings dragged Cole out of a hole and was the biggest “feature” of the ballgame, opined I.E. Sanborn of the Chicago Tribune.11

With one out in the third, Cubs veteran Jimmy Sheckard was involved in what was described as a “trick”12 or “brainy” play.13 With pitcher Les Backman on second and Miller Huggins on first via walks, Rube Ellis lofted a short but routine fly to shallow left field behind third base. According to Dryden, Sheckard “stood under it waiting for it to fall.”14

But instead of catching it for an easy out, Sheckard purposely let the ball fall and trapped it. He quickly rifled a throw to second baseman Johnny Evers, who stepped on the bag to force Huggins. Backman “stood bewildered, not knowing which way to go,” wrote Dryden.15 Evers quickly tagged him for an-inning-ending double play before Ellis reached first. It was a bang-bang play that confused the fans, half of whom “did not know what happened,” and irritated the Cardinals.16 As Dryden wrote, arrogantly, “The Cardinals were annoyed, but they couldn’t just kick because (Sheckard) was too smart for them.”17

The “game was hurried,” noted the Star, but it did not lack action.18 A fielding gem in the first inning prevented the Cubs from taking an early lead against right-hander Backman, who entered the game with a 6-5 slate following his 3-11 rookie campaign. With two men on and one out, John Kane smacked a screeching liner over first base that seemed destined for the outfield corner, but Ed Konetchy “leaped and speared it brilliantly” to save at least one run, reported the Tribune.19

The Cubs scored the game’s first run in the second on Joe Tinker’s double to drive in Frank Schulte, who had walked. Two innings later, the Cubs had Backman on the ropes. Harry Steinfeldt led off with a single and raced to third on Schulte’s liner to shallow right. Right fielder Steve Evans’s ill-advised throw to third was late and allowed Schulte to break for second. Third baseman Mike Mowrey threw wildly to second, enabling Steinfeldt to score for a 2-0 lead.

After Schulte was erased on Tinker’s sacrifice bunt, Jimmy Archer singled to send Tinker to third and then stole second. A single away from blowing the game open, Cole fanned and second baseman Huggins “robbed” Evers with a stellar catch.20

The Cubs tacked on another run in the fifth. Sheckard led off with a double, stole third, and crossed the plate on Kane’s deep fly out.

The Cubs loaded the bases with no outs in the sixth without mustering a hit. Backman, who was “lucky to stick in the big leagues” quipped the Star, hit two batters and walked one.21 But he escaped unscathed on three infield outs.

With the clock approaching 5:00 following Cole’s seventh consecutive hitless frame, the Cubs went to bat in the bottom of the seventh. Kane reached on shortstop Arnold Hauser’s throwing error with one out. Steinfeldt singled, as did Schulte to drive in Kane for the Cubs’ fourth run. Backman’s fifth walk, to Tinker, loaded the bases. With a 1-and-1 count on Archer, home-plate umpire Hank O’Day called the game with the Cubs on the cusp of increasing their 4-0 lead.22

Cole’s no-hitter was the story of the twin bill. He fanned one and walked four while facing 24 batters. En route to winning his next seven decisions, he was “robbed” of a no-hitter in the second game of a doubleheader on August 17 against the Superbas in Brooklyn, settling for a one-hit shutout.24 In a controversial scoring decision in the third inning, Tinker tripped and fell just as he was about to catch Nap Rucker’s routine infield fly and Rucker was credited with a hit.

Cole won his 20th game (against just four defeats) in his final start of the season, overcoming 10 walks to beat the Cardinals 4-3 at West Side Grounds. He paced the NL with a 1.80 ERA and surrendered the fewest hits per nine innings (6.5). In his only start in the Cubs’ loss in five games to the Philadelphia Athletics in the World Series, he had a no-decision, yielding three runs in eight innings in Game Four.

Cole flirted with a no-hitter against the Superbas and Rucker again, on August 2, 1911. He yielded a single with two outs in the eighth in what was eventually a 10-inning, one-hit shutout.25 Cole’s third and final career one-hitter followed on September 20.

For 71 years, Cole’s seven-inning no-no made him a member of the exclusive club of no-hit pitchers. That changed in September 1991, when the Committee for Statistical Accuracy, led by Commissioner Fay Vincent, amended the definition of a no-hitter to include only those games that last at least nine innings and end with no hits. An estimated 36 abbreviated no-hitters were removed from the ranks, including Cole’s.

5 “Cardinals Drop Both of Final Games to Cubs.”

6 “Cardinals Drop Both of Final Games to Cubs.”

8 “Cardinals Drop Both of Final Games to Cubs.”

13 “Brown and Cole Figure as Stars in Cubs Winning Games.”

14 “Brown and Cole Figure as Stars in Cubs Winning Games.”

15 “Brown and Cole Figure as Stars in Cubs Winning Games.”

16 “Brown and Cole Figure as Stars in Cubs Winning Games.”

18 “Cardinals Twirlers Were Easy for Cubs.”

21 “Cardinals Twirlers Were Easy for Cubs.”

22 “Cardinals Drop Both of Final Games to Cubs.”

23 “Cardinals Drop Both of Final Games to Cubs.”