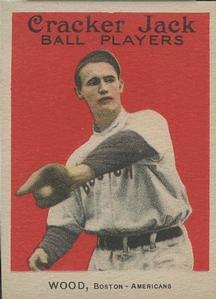 “THIRD DAY OF RECORD HEAT KILLS 37 IN NEW ENGLAND,” the front page of the Boston Globe boomed on the morning of July 5, 1911. Across Eastern Massachusetts, the searing heat was blamed for twisting freight rails, warping sidewalks, canceling some Fourth of July ceremonies, and causing a trolley crash that injured 33 people after an apparently heat-stricken motorman unexpectedly proceeded onto a track occupied by another train.1

The high temperature of 104 degrees recorded at 2 P.M. made July 4, 1911, the hottest day in Boston since record-keeping began in 1871.2 As of January 2021, that long-ago Independence Day remained the hottest day officially recorded in the Hub of the Universe.3

Forty-five minutes after that peak temperature was clocked, and doubtless before it had receded much, the Washington Senators and the Boston Red Sox began the second game of a doubleheader at Boston’s Huntington Avenue Grounds.4 The first game, won by the Senators 6-4, saw both umpires and players affected by the intense heat. The Globe reported that “time had to be called for sponging,”5 and Senators third baseman Kid Elberfeld was so heatstruck after four innings of the first game that he took the rest of the day off and went back to the team’s hotel.6 Still, the teams plugged on for the second game.

Manager Patsy Donovan’s Red Sox entered the day in fifth place with a 35-32 record, 10½ games behind the league-leading Detroit Tigers and 10 behind the second-place Philadelphia Athletics. Jimmy McAleer’s Senators stood in seventh place at 24-45, 22½ games out. Washington had already recorded two eight-game losing streaks that season; the Senators finished the season with a losing record against every other American League team but one, the last-place St. Louis Browns. Against the Red Sox, the Senators went 9-13, including a 4-7 record at Huntington Avenue Grounds.

McAleer gave the second-game start to Bob Groom, the Senators’ number-two starter behind Walter Johnson. Groom had a 4-10 record coming into the game, with a 1-2 record against Boston; he’d beaten the Red Sox 3-2 in a complete game on April 13 in Washington. Donovan opted for an unknown starter in Jack Killilay, a 24-year-old rookie making his fifth major-league appearance in his only major-league season. Killilay entered the game with a record of 2-0 and had never faced the Senators.

Washington first baseman Germany Schaefer singled with one out in the first but was thrown out trying to steal second. This proved to be a fateful decision as the next batter, second baseman Bill Cunningham, tripled to deep center field, with only a well-executed relay keeping him from a home run.9 Killilay then hit cleanup hitter and right fielder Doc Gessler in the ribs with a fastball, and Gessler stole second to put two men in scoring position. But left fielder Jack Lelivelt lined a “savage drive” to Boston shortstop Steve Yerkes, ending the threat.10

Boston wasted a threat in the bottom of the inning as right fielder Harry Hooper singled, moved to second on a sacrifice, and stole third. The Red Sox tried a squeeze play with center fielder Tris Speaker batting, but Speaker missed the pitch and Hooper was tagged out at the plate.11 They tried the squeeze again the following inning, and this time it worked. Yerkes singled, third baseman Billy Purtell sacrificed, first baseman Hap Myers12 singled Yerkes to third, and rookie catcher Les Nunamaker sacrificed again for a 1-0 Boston lead.13 Speaker, atoning for his blown bunt, hit a home run to left-center field in the third to bring the score to 2-0.14

Killilay, who surrendered no hits in the second and third innings, gave up a pair of hits in the fourth but was saved by fine defensive play by Yerkes. The rookie ran out of gas with one out in the fifth: He walked opposing pitcher Groom, then walked off the field, taking himself out of the game.15

Knuckleballer Eddie Cicotte, who started and lost the first game, came on to replace Killilay. Center fielder Clyde Milan and first baseman Schaefer hit consecutive singles, and moved up a base when left fielder Duffy Lewis threw home in an unsuccessful attempt to retire Groom at the plate. Washington tied the game 2-2 on the next play, though news accounts differ on what the scoring play was: The Washington Post had Milan scoring on Cunningham’s groundout, while the Boston Globe had him scoring on a wild throw to first by Red Sox second baseman Larry Gardner. Either way, Cicotte retired the next hitter to hold the Senators to two runs.

With Groom still on the mound for Washington, the bottom of Boston’s order broke the tie in the sixth inning. Purtell singled, stole second, and scored to make it 3-2 when Nunamaker hit “a drive through” Washington shortstop George McBride.16

Pitcher Tom Hughes, who won the first game with four innings of shutout relief, replaced Groom and shut out Boston on one hit in the seventh and eighth, escaping a bases-loaded jam in the seventh. Cicotte also pitched shutout ball in the seventh and eighth – but fainted after the eighth and had to be carried from the field by four teammates. “‘Knuckles’ had thrown up the sponge. Old Sol had him down and out,” reported the Washington Evening Star.17

Smoky Joe Wood, who had played no part in the first game, came on to close out the game for Boston in the ninth. With one out, he walked sore-footed Washington catcher Fred Ainsmith, pinch-hitting for Hughes.18 Milan and Schaefer, the heroes of the fifth inning, again hit back-to-back singles to score pinch-runner Tillie Walker. Wood retired Cunningham and Gessler to escape the inning with a 3-3 tie.19

McAleer sent Dixie Walker20 back to the mound for the bottom of the ninth, even though Walker had started the first game, giving up 10 hits and four runs in five innings. He fared worse in the second game. Hooper led off the ninth with a single, and Gardner and Speaker beat out bunts to load the bases with none out. Hooper took off for home on a fly to shallow left field by Lewis. Lelivelt’s throw to catcher John Henry was on target, and umpire Jack Egan initially called Hooper out. But Henry could not hold the throw, and when Egan saw the loose ball, he reversed his decision and signaled Hooper safe with the game-winning run, ending 2 hours and 10 minutes of infernally hot gameplay.21 It was a bitter ending for Henry, who caught the entire doubleheader for the Senators, went 1-for-7 at the plate, and said afterward he’d lost eight pounds.22 Henry “looked as if he had fallen into the River Charles,” the Washington Evening Star reported.23

Walker took the loss to fall to 5-7, while Wood went to 15-7 with the win. Both teams ended the season in the places they were on July 4: Boston in fifth place, Washington in seventh. As for the New England heat wave, it broke late on the afternoon of July 6. Intense thunderstorms strafed the region, with lightning bolts burning down a state armory, a town hall, at least two churches, and the New Hampshire home of US Rep. Cyrus Sulloway.24

In addition to the specific sources cited in the Notes, the author used Baseball-Reference.com and Retrosheet.org for general player, team and season data and the box scores for this game.

1 All stories taken from the Boston Globe, July 5, 1911: 1-2. Many of the passengers on one of the crashed trains were reportedly returning from a New England League baseball game at Lawrence, Massachusetts.

2 “Third Day of Record Heat Kills 37 in New England,” Boston Globe, July 5, 1911: 1. A subheadline on the story makes mention of “Mercury at 106 in Boston,” but both this story and subsequent weather coverage report an official high of 104 degrees.

4 Boston’s National League team was in New York City that day playing a doubleheader against Brooklyn. Conditions were scarcely more clement there: The Boston Globe reported 26 heat deaths in New York City over a three-day span.

11 “Nationals Divide with the Red Sox.”

12 Myers, a second-year big-leaguer, was on his second tour of duty with the Red Sox. He appeared for the team on April 13, then was sold to the St. Louis Browns on May 12. After 11 games with the Browns, Myers was sold back to the Red Sox on May 25.

13 “Nationals Divide with the Red Sox.”

14 News accounts do not specify whether Speaker’s home run was hit over the fence or was an inside-the-park shot. Ron Selter’s SABR ballpark biography of the Huntington Avenue Grounds notes that of the 41 inside-the-park homers hit there in 1910-1911, only one was hit to left-center.

16 “Nationals Divide with the Red Sox.”

17  “Small Crowds Witness Two Games on Boston Grounds.” The Globe noted that Cicotte’s “stomach had gone back on him,” so Cicotte may have thrown up something besides the metaphorical sponge.

20 Ewart Gladstone “Dixie” Walker played in 76 big-league games with the Senators from 1909 to 1912. He was the father of future National League batting champions Fred “Dixie” Walker and Harry “The Hat” Walker.