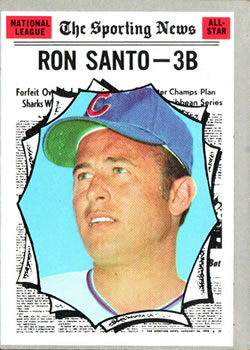 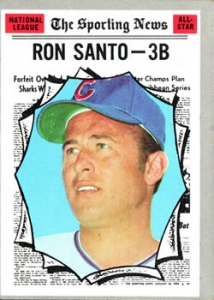 After committing three errors and losing a pop foul in the sun the previous day, veteran Chicago Cubs third baseman Ron Santo redeemed himself by hitting two home runs and driving in eight runs in the second game of a doubleheader against the Montreal Expos on July 6, 1970.

“Big days in the major leagues are part skill, part luck, a lot of opportunity,” Santo said years later in his autobiography. “There are days when the ball seems as big as a beach ball but you hit it right at someone. And there are those days when you hit the hell out of the ball and there’s no one on base to drive in. This day, everything worked right.”1

The Cubs welcomed the Expos to Wrigley Field after losing three of four games to the Pittsburgh Pirates over the Independence Day weekend. In the final game of the series, on July 5, Santo made two errors in the first inning as the Pirates scored three quick runs and rolled to a 5-2 win.

Things started looking up again for Santo in the first game of the July 6 doubleheader, when his two-run homer off Montreal’s Carl Morton in the fourth inning put the Cubs ahead to stay in a 3-2 victory. But he was just getting started on the Monday afternoon.

After Expos second-game starting pitcher Mike Wegener walked Don Kessinger, Johnny Callison, and Billy Williams in the Cubs’ half of the first inning, Santo hit a grand slam to give Chicago a 4-0 lead. He walked to lead off the home half of the third inning but was forced at second base on a groundball.

Santo picked up another RBI when he walked with the bases loaded in the bottom of the fourth inning, increasing the Cubs’ lead to 7-2. In the sixth inning, Williams walked, Jim Hickman singled, and Santo homered off Claude Raymond for a 12-2 lead. The Cubs scored their final runs of the day later in the inning on Willie Smith’s double, Phil Gagliano’s single, and Joe Decker’s groundout.

“What a thrilling day,” exclaimed Santo, who received a standing ovation late in the nightcap. “I had eight RBIs in a game before, against the Giants in the early ’60s, but I’ve never knocked in 10 runs in a single day.”2

Santo missed an opportunity to drive in even more runs when he hit into a double play with two runners on base in the seventh inning. Nevertheless, he went 2-for-3 with two walks in the nightcap, played before 19,743 fans. Counting the first game, he went 3-for-6 at the plate, walked twice, hit three homers and drove in 10 runs – his most productive day in a 14-year major-league career that included nine All-Star Game appearances and five Gold Gloves.

“I was really struggling,” Santo said, referring to his pre-July 6 slump. “I was so frustrated I didn’t know which way to turn. And I was listening to everybody, which probably is a mistake in itself.

“Anything a guy can do wrong at the plate, I was doing it. I was dipping, undercutting, and everything else. As I became more frustrated, I tried to swing harder and harder to knock the ball into the next county and that obviously made it all the worse.”3

Chicago sportswriter Richard Dozer called the Cubs’ doubleheader sweep “the most satisfying day in Wrigley Field since Ken Holtzman’s no-hitter last August.”4 Dozer noted that Santo had regained his home-run stroke “because he shortened his stride and never once was tempted to swing for the fence, though he hit three homers.”5

After his historic day, Santo credited teammate Al “Spanky” Spangler with noticing what he had been doing wrong at the plate. His home-run splurge occurred “because I’m concentrating on staying away from the big stride, which I finally discovered had been making me lose sight of the pitch,” he told Dozer. “Ever since Spanky came back to the club last week [after two months at Triple-A Tacoma as a player-coach], I’ve been swinging right. He noticed what I was doing.”6

Until July 6, Santo had not hit a home run in nearly three weeks. The three homers lifted his total to 10 for the season, third on the team behind Williams, who had 24. His 10 RBIs that day gave him 52 for the season, third behind Williams’s 75. Santo finished the 1970 campaign with 114 RBIs, the fourth and final time in his career he had driven in more than 100 runs. Over 1969-1970 alone, he knocked in 237 runs. Referring to Williams’s 129 and Hickman’s 115 RBIs that season, he said, “Not many times in baseball history has someone driven in 114 runs and wound up third on his own team.”7

Santo’s second-game heroics overshadowed a superlative pitching performance by rookie right-hander Decker. Decker’s record improved to 2-4 with his first career complete game, a six-hit masterpiece in which he struck out three and walked four.8 He allowed only two singles in the last five innings and singled himself in the bottom of the fourth. The Expos scored in the top of the second inning, with the help of Decker’s wild pitch, and in the fourth on Bob Bailey’s homer.

On July 1, pitcher Ferguson Jenkins stopped the Cubs’ losing streak with a four-hit, 11-strikeout shutout of the St. Louis Cardinals, but the Cubs lost three of the next four games against the Pirates, setting up the showdown with the Expos. The doubleheader sweep on July 6 gave them a record of 39-40, good for third place in the National League’s Eastern Division, 4½ games behind the first-place New York Mets.

In 1970 the Cubs finished second in the NL Eastern Division at 84-78. They were only 1½ games out of first place as late as September 19. They were not eliminated until September 27, with four games left in the season. A 6-4 loss at the hands of the Expos on September 20 was perhaps the most crucial and memorable loss of the season, declared sportswriter Jerome Holtzman.9

Ahead 4-2 with one out in the bottom of the eighth inning, Cubs reliever Phil Regan induced the Expos’ Rusty Staub to hit a potential inning-ending grounder. But the ball bounced off first baseman Hickman’s glove for a hit. The Expos rallied and ended up winning 6-4. If the Cubs had held on to the lead, they would have gained a half-game on the Pirates, who split a doubleheader with the Mets.10 The Cubs clinched second place in the Eastern Division on the last day of the season with a 4-1 victory over the Mets.

The Expos finished last in the division with a 73-89 record under manager Gene Mauch. They lost 11 straight from May 23 to June 4 and had the worst team batting average and ERA in the National League. However, Morton was named The Sporting News’ Rookie Pitcher of the Year with an 18-11 record and a 3.60 ERA. Staub was the club’s biggest offensive threat with 30 homers and 94 RBIs.

Besides the sources listed in the Notes, the author used Baseball-Reference.com, Retrosheet.org, Baseball-Almanac.com, Paperofrecord.com, Newspapers.com, Cubsinsider.com, and the 1971 Chicago Cubs Official Roster Book.