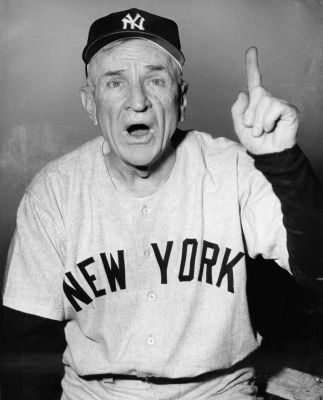 In 1957, the fans, with some help from Commissioner Ford Frick, selected the starters for the All-Star Game. The folks of Cincinnati exercised their franchise by stuffing the ballot box and selecting Reds players at all but one position. Five Reds started the game, as Frick named outfielders Willie Mays and Henry Aaron to start in place of Gus Bell and Wally Post.

American League manager Casey Stengel was disappointed with the fans’ selections of Harvey Kuenn, Vic Wertz, and George Kell to the starting lineup, and early on vowed to remove the trio after three innings. His reasoning was that these players were not having particularly good years.

It was the 24th All-Star Game and the first in St. Louis since the Browns departed Sportsman’s Park, now called Busch Stadium, for Baltimore after the 1953 season. The park had also hosted the game in 1940 and 1948.

Under sunlit skies on what evolved into a glorious afternoon weatherwise, the players took the field and managers Stengel and Walter Alston met each other for the second consecutive year. Each manager selected seven pitchers for the contest and the American League squad, batting first, faced Curt Simmons of the Philadelphia Phillies. The left-hander from Egypt, Pennsylvania, put down the American Leaguers in order in the first inning. The AL starter, Detroit’s Jim Bunning, matched him by setting down the first three batters he saw in the bottom half of the inning.

The American League, which had lost five of the six games Stengel had managed, broke on top in the second inning. Mickey Mantle, batting right-handed, led off the inning with an infield single before Simmons walked Ted Williams to put runners at first and second base. The left-handed-hitting Wertz singled to the opposite field, scoring Mantle with the game’s first run. Yogi Berra walked on Simmons’s last pitch of the game and Alston called in Lew Burdette to snuff out the rally. Burdette retired Kell and Bunning but walked Kuenn to force in Williams with the second run of the inning. Nellie Fox was retired on a fly ball to conclude the half-inning.

After the American League had batted in the top of the fourth inning, Stengel, as promised, removed Kuenn, Kell, and Wertz, and replaced them with Gil McDougald, Frank Malzone, and Bill Skowron. He explained, “I’m in favor of leaving the balloting in the hands of the fans, but the system should be changed to prevent a repetition of the ‘Cincinnati and Kuenn, Kell, and Wertz incidents.’ Kuenn, Kell and Wertz should not have been picked because they’re not having good years.”2

Bunning left the game after three perfect innings and was replaced by Billy Loes. Bunning, playing in his first full season and making his first appearance on center stage in the midseason classic, would have preferred to stay in the game. “I know that the rule prohibits a pitcher from working more than three innings, except if he is a reliever during an inning or if he is an extra-inning pitcher, but I would have liked to continue today,” he said. “Maybe it would have been pressing my luck, but I still would have liked to keep pitching.”3

Loes allowed three hits in his three innings of work but kept the opposition from scoring. Burdette, meanwhile, after the second inning kept the American League in check. In all, he pitched four scoreless innings and yielded just two hits, though he pitched in luck, especially in the fifth inning. Frank Robinson led off the fifth with a single, and Eddie Mathews stepped to the plate. Mathews pulled a line drive to short right field as Al Kaline gave chase. Robinson, thinking the ball might be caught, stopped halfway to second base as Kaline attempted a shoestring catch. Kaline trapped the ball but was able to force Robinson at second base for the first out of the inning. Ernie Banks than hit into a double play and the score remained 2-0 as the game entered the sixth inning.

Philadelphia’s rookie ace Jack Sanford came in to pitch for the National League and was done in by a pair of Yankees. Moose Skowron doubled with one out and, after advancing to third base on a wild pitch, scored easily on a single by Berra. It was Yogi’s first RBI in 31 All-Star plate appearances over nine games. That was the only run allowed by Sanford, who gave way to Larry Jackson in the seventh inning.

Loes came out of the game after three scoreless innings and was replaced by Cleveland’s Early Wynn as the game advanced to the bottom of the seventh. Wynn had pitched seven innings on the Sunday before the All-Star Game, a decision that infuriated Stengel, and he was ineffective on Tuesday. With one out, Mays singled and moved to third on a single by Cincinnati’s Ed Bailey. In a move that could only happen in an All-Star Game, Alston removed Frank Robinson and inserted left-handed pinch-hitter Gus Bell. Bell doubled down the left-field line, scoring both Mays and Bailey, and the National League trailed by only one run. That was it for Wynn. Billy Pierce came on in relief and the White Sox lefty retired Mathews and Banks.

Going into the ninth inning, the AL still led 3-2 as Jackson and Pierce each pitched a scoreless eighth. In the top of the eighth, after Mantle led off with a walk, Williams sent a fly ball to deep center field that Mays had been able to track down for the first out. Although the catch paled against some of the circus catches for which Mays was famous, it nonetheless showcased the fielding capabilities of the New York star, who over the years shined in All-Star Games. He appeared in a record 24 games, and holds or shares the career records for runs scored (20), hits (23), extra-base hits (8), triples (3), stolen bases (6), and total bases (40). In 1963, he stole two bases in an inning, and in 1965 led off the game with a homer. He was selected as the All-Star Game MVP in 1963 and 1968.

Alston brought in Dodgers ace reliever Clem Labine to pitch the ninth inning, but Labine faltered. Stengel elected to have Pierce, who had retired the five batters he faced, three by strikeout, bat for himself, and Billy hit a leadoff infield single that eluded Labine and rolled slowly up the middle. Red Schoendienst was able to get a glove on the ball, but could not make a play. The normally reliable Schoendienst then misplayed a potential double-play groundball hit by McDougald, dropping the ball as he pivoted to throw to the shortstop, for the game’s only error — and a critical one at that.

After Fox’s sacrifice bunt put runners at second and third with one out, Kaline singled both runners home to give the AL a three-run cushion. Labine struck out Mantle, but Minnie Miñoso, who had replaced Williams in left field in the eighth inning, stroked a double to right-center that was out of the reach of Mays and brought home Kaline with the sixth American League run. The American League took a 6-2 lead and the National League was down to its final three outs.

Pierce retired not a batter in the ninth inning. A walk to hometown favorite Stan Musial, playing in his 14th All-Star Game, was followed by a triple off the bat of Mays. Mays came home with the fourth of his team’s runs on a wild pitch, and Pittsburgh’s Hank Foiles singled to center field to continue the rally. Pierce’s last pitch was ball four to Bell, and the tying runs were on base. Stengel brought in the Indians’ Don Mossi, who struck out Mathews. Banks followed with a single that plated Foiles, but Miñoso cut down Bell trying to advance from first to third. “Minnie made a whale of a throw to Malzone to get Bell,” Alston said. “It had to be a perfect throw and that’s what he made. That was the biggest out of the game, maybe.”4

Banks took second on the throw to third and was in scoring position with the tying run. Stengel brought in one of his eight Yankees All-Stars, Bob Grim, to pitch to Gil Hodges, batting for his Dodgers teammate, Labine. Hodges made a bid for extra bases, lining a ball into the left-field corner, but Miñoso ran down the liner to make his second superb play of the inning and secure the 6-5 win for the American League. The decisions in the contest, which took 2:43 to play, went to the starters, with Bunning getting the win and Simmons absorbing the loss.

In additional to the sources cited in the Notes, the author used Baseball-Reference.com and the following: