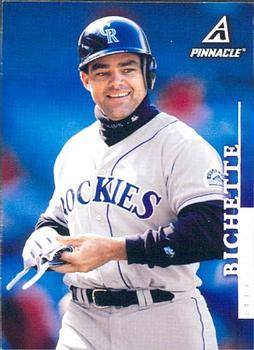 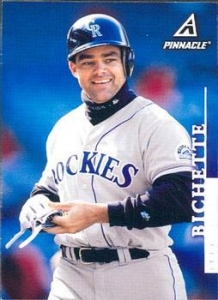 The first 60 games of the Colorado Rockies’ 1998 season were against familiar National League opponents. The next six, however, consisted of two three-game interleague series against the American League’s Anaheim Angels and Texas Rangers. Interleague play was in its second season,1 and the schedule resulted in the Rockies playing back-to-back series against two unfamiliar teams.

Both Anaheim and Texas were off to fast starts in 1998, fighting each other for their division lead.2 The Angels continued their hot streak by sweeping Colorado, and the Rangers won the first two games in their series against the Rockies.

The final game of the series with Texas was set for June 10 at Coors Field. The Rockies led the NL in attendance in 1998, and on this Wednesday night, 48,061 fans turned out.3 Left fielder Dante Bichette was in his sixth season with the Rockies and a .317 hitter overall in a Colorado uniform. The 34-year-old Bichette had struggled in the first five interleague games of the season, batting a combined 4-for-19, but he broke out of that mini-slump in a big way against the Rangers, hitting for the cycle in dramatic fashion.

Two left-handers, Colorado’s Bobby Jones and Texas’s Darren Oliver, started the game. Jones was in his second season (he had only four appearances in 1997), and he had spent much of his sophomore year as a reliever. Now he was making his fourth start, in search of his second win. Oliver was struggling, and he brought a 3-5 record with a 6.72 earned-run average to the hill. Each starter lasted only five innings, and neither earned a decision.4

The back-and-forth battle started in the bottom of the second inning. Colorado’s Vinny Castilla led off with a single to right. He advanced to second on a passed ball, and then Greg Colbrunn reached first with a walk. Todd Helton5 grounded a single up the middle, and Castilla scored. Both Colbrunn and Helton took another base on the throw to the plate.

Kirt Manwaring was hit with Oliver’s first offering, loading the bases with nobody out. Oliver struck out Curtis Goodwin, and then Jones’s grounder to second forced Manwaring, but Colbrunn scored. With runners on the corners, Neifi Perez stroked a double to left, plating Helton. Mike Lansing grounded out to end the inning, but the Rockies had sent eight men to bat, scoring three runs.

The Rangers evened the game an inning later, when Roberto Kelly hit his second home run of the season. Cedeño followed by doubling to right and scoring on Oliver’s double to deep center. It was Oliver’s second career base hit (first double) and his only run batted in of the season. Goodwin’s grounder between first and second resulted in an error by Rockies first baseman Helton, and Oliver scored, upping the Texas advantage to 5-3. In his first game batting in 1998, Oliver had driven in a run and scored another.

Oliver, however, was less successful on the mound. In the bottom of the fourth, he got two quick outs, but singles by Jones and Perez and a walk to Lansing loaded the bases. Bichette, who had grounded out in each of his first two at-bats, drove a pitch into deep left field that one-hopped to the wall. Bichette’s stand-up double cleared the bases, giving Colorado a 6-5 lead.

Again Texas responded. Rodríguez led off the fifth with a single into the hole at short. With one out, Jones plunked Will Clark, putting Rodríguez into scoring position. After Jones struck out Kelly, Cedeño lined the first pitch from Jones for a game-tying double.

The scored remained tied until the bottom of the sixth. Perez walked on four pitches, bringing Texas manager Johnny Oates to the mound for a pitching change. Right-hander Al Levine replaced Oliver and threw one pitch home, which catcher Manwaring then fired to first base, picking off Perez.

After Lansing popped out to center, Bichette hit Levine’s first offering over the center-field wall, just to the right of the 415-foot sign. He started his trot around the bases with a double fist pump. His eighth homer of the season gave Colorado the lead once more.

The Rockies’ advantage, however, was short-lived, as Juan Gonzalez’s solo shot tied the game in the top of the seventh. It was Gonzalez’s 21st homer and 79th RBI of the season.

Over the next three half-innings, each team put a runner on base, only to be eliminated with a double play. Finally, in the top of the ninth, Rodríguez scorched a triple deep down the right-field line and scored on Gonzalez’s single. Texas led, 8-7.

Texas closer John Wetteland came in for the final three outs, but Bichette greeted him with his third extra-base hit of the game, “a line-drive triple that caromed off the right-field wall.”7 The ball rolled back toward the infield, allowing Bichette to race around the bases and slide into third ahead of Gonzalez’s throw from right. He scored the game-tying run when Castilla hit a single into shallow center, sending the contest into extra innings.

The Rangers had a two-out single from Rusty Greer in the top of the 10th, but he was stranded when Tom Goodwin flied out to end the inning. In the home half, John Vander Wal, who had entered the game in the eighth inning as a defensive replacement for Colbrunn, worked a walk with one out against Eric Gunderson, Texas’s sixth pitcher of the game. Perez flied out, and Danny Patterson came on to pitch. Lansing’s single sent Vander Wal to third base.

Bichette swung at the first pitch he saw from Patterson, a fastball,8 and lined it over Greer’s head in center for the game-winner. The ball actually bounced on the warning track and over the fence in left-center, but Bichette was given credit for a single.9

With the 9-8 win, Colorado ended its five-game losing streak. Wetteland had blown the save opportunity, his second blown save in 20 such opportunities in 1998. For the season, the Rockies played a three-game series against each of the four AL West Division teams. They won four of the 12 games. The Rangers played a total of 16 games against the five teams in the NL West, winning half of them.

In addition to the 17 total runs, each team had 14 hits.10 Cedeño led the Rangers with a 4-for-5 game, with two doubles. Gonzalez now had 80 RBIs in just 64 games and was on pace to drive in over 200 runs.11 Castilla and Perez each contributed three hits to the Rockies attack. Bichette’s four-hit, five-RBI performance caused his batting average to rise seven points to .343.12 It was the sixth time he had collected at least four hits in a game in 1998.13

Less than a month later (July 7), three members of the Rangers (Gonzalez, Rodríguez and Wetteland) returned to Denver to play in the All-Star Game. Rodríguez had three hits, and he and Gonzalez drove in a run each. Wetteland threw only seven pitches (all strikes) in retiring the NL side in the seventh inning (including both Bichette and Castilla).

The author sincerely thanks SABR member Stew Thornley, the official scorer for the Minnesota Twins home games and a member of the SABR’s Official Scoring Advisory Committee for Major League Baseball, for explaining that Bichette’s 10th-inning hit was a single instead of a ground-rule double. Only one base was needed to win the game.

The author also thanks Games Project Chair John Fredland for insights into the 1998 season, both for the Rockies and the All-Star Game in Denver.

This article was fact-checked by Thomas J. Brown, Jr., and copy-edited by Len Levin.

A video recap of Bichette’s four base hits can be seen on mlb.com:

1 The first interleague game in the major leagues took place on June 12, 1997. In that game, the Texas Rangers hosted the San Francisco Giants at The Ballpark in Arlington, and the Giants prevailed, 4-3.

2 Each NL West team played a series against each AL West team.

4 Oliver was traded by Texas with Tatis and a player to be named later (Mark Little) to the St. Louis Cardinals on July 31 for Royce Clayton and Todd Stottlemyre.

5 Helton played 35 games in 1997, batting .280 while playing both in the outfield and at first base. In 1998 he became the starting first baseman for the Rockies, making 146 appearances at first. (He also was used as a pinch-hitter in 14 games.)

6 According to the Fort Worth Star-Telegram, Alicea “experienced tightness in the area surrounding his left rib cage,” causing him to leave the game after the second inning. Sheldon pinch-hit for Alicea and stayed in the game, playing shortstop. Cedeño moved over to play second base. See Johnny Paul, “Depleted Rangers Fall in 10,” Fort Worth Star-Telegram, June 11, 1998: 37.

9 Only one base was needed to win the game. See Author’s Note.

10 The Rockies ended the 1998 season tied for fourth with the Braves in the NL in runs scored (826). However, Colorado scored 526 of those runs at Coors Field, with 300 runs scored in away games. The team was better at home in every offensive category (more hits, higher batting average, more walks, fewer strikeouts, more sacrifices, fewer grounded-into-double-plays).

11 Gonzalez ended the season with 157 RBIs, which still led the American League (Chicago Cubs slugger Sammy Sosa had 158 to lead the majors). That tied Gonzalez with Al Simmons’s mark from 1929, giving them both the 27th-best single-season record. Batting .318 with 97 extra-base hits (45 home runs, 2 triples, 50 doubles), Gonzalez won the 1998 American League Most Valuable Player Award, the second time in his career he had garnered the honor. (His first MVP season came in 1996.)