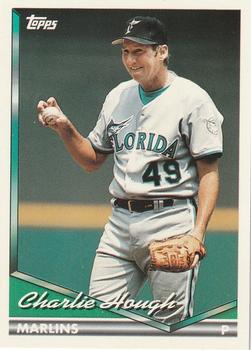 The end was coming.

Such is the reality any time a 46-year-old pitcher climbs atop a major-league mound.

Charlie Hough hobbled and limped his way on and off of the field throughout the 1994 season for the Florida Marlins. But as spring turned into summer — and despite the longevity that had afforded the knuckleballer a 25th straight season — it was becoming clear that Hough’s case would not be an exception to the rule.

The end was indeed near for Charlie Hough.

But on one sweltering June night at Busch Stadium in St. Louis, Hough’s knuckleball fluttered the way it did when he was in his prime. His step had more pep than limp. And the “old man” who helped define the earliest Marlins rosters used 127 pitches to live through a night of the kind he hadn’t experienced in almost three years.

Hough stymied the St. Louis Cardinals on June 14, 1994, for his first complete-game shutout since August 4, 1991, and the Marlins got a grand slam from rookie Kurt Abbott on the way to a 7-0 victory that snapped their five-game losing skid.1

“I think they should give him a five-year contract,” said Cardinals manager Joe Torre, who went 1-for-13 against Hough when both played in the National League during the 1970s. “The way he pitched, you didn’t know how old he was tonight.”2

With the temperature above 90 degrees at game time, everyone from the players and coaches to the 24,450 fans in the ballpark looked for ways to beat the heat. Hough kept it simple — sipping a Coke between innings on his way to his 13th career shutout.3

“It was an outstanding effort for him to pitch the way he did. Especially on a day like today. It’s just something else,” said Rene Lachemann, Florida’s 49-year-old manager. “What is he? Two years younger than me? I have a tough time just sitting through a game like this and he’s out there pitching a shutout.”4

The showing was Hough’s last hurrah in the major leagues: The first shutout he ever pitched in the National League served as the 216th and final victory of his career.5 He lost five of his next seven starts and was forced into retirement on July 27 because of a degenerative hip.

“How does Charlie Hough do it?” said Rusty Kuntz, Florida’s outfield coordinator, who was tasked with clocking Hough’s pitches during the game against the Cardinals. “He started off at 77 (miles per hour), and he finished up at 77. How does the man do it?”6

In improving his record to 5-4 for the season, Hough struck out nine Cardinals — including the first three batters of the game and every starter except Todd Zeile.7 He allowed just two men to reach scoring position.

“That was ugly. That was 99 percent (Hough). I don’t care if you’re going good, he’s not the guy you want to face,” said Cardinals first baseman Gregg Jefferies, who recorded one of his team’s five hits to extend his hitting streak to seven games. “There’s no consistency to the knuckleball. His ball was all over the place tonight.”8

Despite Hough’s dominance, Florida’s offense didn’t give him much run support until late in the game.

St. Louis starter Vicente Palacios retired the first nine Marlins in order, but ran into trouble in the top of the fourth.9 Chuck Carr led off the inning with a single, but Jerry Browne bounced a ball back to Palacios for what should have been an easy double play. Jose Oquendo, who was starting at shortstop in place of the suspended Ozzie Smith, forced out Carr at second. But Oquendo mishandled the throw and then threw the ball beyond first base, allowing Browne to advance to second.10

“I take that real hard,” Oquendo said of committing the game’s only error. “That’s what I’m in there for, to play good defense. It’s very disappointing.”11

Gary Sheffield smacked a double to left to bring Browne home with the first run of the game. After Jeff Conine flied out, Matias Carrillo drove Sheffield home for a 2-0 lead when he lined a single to right.12

The Cardinals tried to answer in the bottom of the frame. Bernard Gilkey grounded out to third, but Geronimo Peña was hit by a pitch and Jefferies followed with a single to move a runner into scoring position for the first time in the game. Hough induced back-to-back popups — Zeile to the catcher and Ray Lankford to third base — to end the threat.

After being set down in order in the fifth, the Cardinals tried to get to Hough in the sixth. Palacios struck out and Gilkey grounded out to short, but Peña wouldn’t let Hough breeze through the inning. He rapped a single to center and stole second, and Jefferies walked to give Zeile another chance to break out of his slump. Zeile instead flied out to center to end the inning.

But with Hough approaching his usual pitch limit and the Marlins holding a slim lead, his opportunity to go for the complete game was in jeopardy.

“It would have been difficult for him to stay in with a two-run lead,” said Lachemann, an acknowledgment that Hough had allowed fewer than two runs only twice in his first 13 starts of the season.13

But saving Hough’s last shot at glory was a rookie, who was young enough that he could have been the pitcher’s son.

Conine, Carrillo, and Bret Barberie led off the top of the seventh inning with singles off Palacios to add a run to the lead and chase him from the mound. John Habyan came in for his 34th relief appearance of 1994, and surrendered a single to Benito Santiago to load the bases.

Abbott, the 25-year-old who had hit his first career grand slam nine days earlier, stepped up to the plate and worked the count into his favor like a grizzled veteran.

“Three-one, with the bases loaded?” Abbott said. “You better believe I was looking for a fastball. I was just happy to hit the ball hard somewhere. I had just struck out twice in a row.”14

Abbott deposited the 3-and-1 pitch into the right-field bleachers for an opposite-field grand slam and a comfortable 7-0 lead. Two of those runs were charged to Palacios, who took the loss to fall to 1-4 but struck out seven batters.

“That was a big, big hit,” Hough said. “I usually end up giving up at least two or three runs. That gave us a lot of help.”15

Tom Pagnozzi and Gilkey each hit harmless singles in the next two innings, as Hough continued to fool the Cardinals. They were so fooled in the seventh that Brian Jordan began walking to the dugout in frustration after taking a 0-and-2 pitch that home-plate umpire Rich Rieker called a ball. On the next pitch, Jordan became Hough’s eighth strikeout victim.16

In the top of the ninth, the Marlins nearly got Hough some additional insurance runs. Barberie singled and Santiago walked to open the inning off reliever Rich Rodriguez, and Abbott hit into a fielder’s choice to move both runners into scoring position. But Hough couldn’t help himself and flied out to right, and Carr ended the inning with a groundout to third.

Cardinals hitters took frustrated swings one last time in the bottom of the ninth. Zeile popped up to the catcher, Lankford struck out, and Jordan popped out to shallow right field. With the win, Florida evened a three-game series. It was the team’s fifth shutout of the season.

“It was fun,” Hough said. “It would have been easy to say get somebody else to finish it off, but we might need that somebody to finish things off tomorrow.

1 The Marlins improved to 31-33 with the victory, while the Cardinals dropped to 32-29. Neither team factored into the top of the final standings of a season abruptly halted on August 12 after the players union went on strike. Florida was last in the National League East Division at 51-64, and St. Louis finished fourth in the NL Central at 53-61.

7 It was almost surprising that Zeile wasn’t a strikeout victim. He was mired in a terrible slump, having gone 1-for-24 over the previous seven games. After a 0-for-4 effort against Hough, Zeile started an eight-game hitting streak the next day.

9 Palacios settled in nicely after getting shelled in his last start. Five days earlier, he had allowed five runs (including two home runs) in two-thirds of an inning against the Philadelphia Phillies.

10 Smith was suspended as a result of a May 25 argument with home-plate umpire Steve Rippley. The brim of Smith’s batting helmet made contact with Rippley during the exchange.