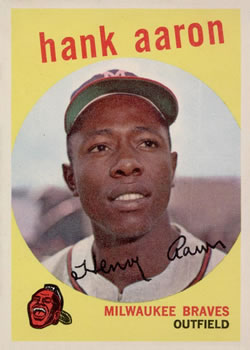 Facing the Milwaukee Braves in the late 1950s was a proposition as daunting as a church group protesting suggestive song lyrics during rock ’n’ roll’s emergence at the time.

It wasn’t exactly a futile journey. But it might have felt that way for NL squads.

Henry Aaron was a highly significant factor for the Braves’ success, which included two National League pennants (1957, 1958) and a World Series title (1957). They finished the 1956 season only one game behind the pennant-winning Brooklyn Dodgers.

In 1959 Aaron had another banner year, topping the majors in hits (223), batting average (.355), slugging percentage (.636), and total bases (400). His performance on June 21 might be viewed as a model of sheer power – three round-trippers in a 13-3 victory over the San Francisco Giants at Seals Stadium. However, the modest slugger credited two of the home-run balls with being “windblown” in their journeys toward the stands.1

It was the only time Aaron achieved baseball’s equivalent of a hat trick in his 22-year career that ended with 755 home runs, which stood as the major-league record until Barry Bonds broke it in 2001 and finished with 762. Aaron’s three homers rocketed into the left-field stands.2

Milwaukee leapt to a 5-0 lead in the top of the first.

Andy Pafko, then in the last season of a 17-year career, smashed a triple to lead off.3 Giants lefty Johnny Antonelli got Eddie Mathews out, then Aaron followed with his first homer of the afternoon – and 17th of the season – to make the score 2-0. Joe Adcock and Del Crandall furthered the offense with a walk and a single, putting them on first and second.

Antonelli got a breather when Wes Covington flied to right fielder Willie Kirkland. But Johnny Logan’s three-run blast and Felix Mantilla’s single prompted a pitching replacement, which is a rare occurrence for any team in the first inning.

It was especially shocking because Antonelli was a stalwart hurler for the Giants with a 7-3 record in his previous 10 starts and the momentum of a three-game winning streak coming into the contest against the Braves. His 1959 record was 19-10.

Pafko came to bat for the second time in the inning and flied to center fielder Willie Mays. But Pafko’s tour ended there; Braves manager Fred Haney substituted Bill Bruton in center field in the bottom of the second. Spencer rebounded from his first-inning error by hitting a solo homer to give the Giants their first run.

A solo shot by Crandall led off for the Braves in the top of the fifth and raised the lead to 6-1.

Aaron bolstered the lead to 9-1 with his second homer of the day.

Fellow righty Gordon Jones relieved Miller and got Adcock out with a called third strike. Crandall’s walk and Covington’s single put runners on first and third.

In the top of the seventh, Spahn singled and moved to second on Bruton’s sacrifice to pitcher Jones. Mathews’s single scored the hurler and Aaron bashed his third two-run homer of the day to make the score 13-1.

Three successive singles led to the Giants’ second run of the game. In the top of the seventh, Rodgers got a base hit with two outs and Felipe Alou, batting for Jones, notched a pinch-hit single to put runners on first and second. Rodgers scored on Jim Davenport’s single.

Joe Shipley pitched the eighth and ninth innings for San Francisco, giving up no runs.

Though as meaningless as bringing sand to Baker Beach, just six miles west of the action at Seals Stadium, San Francisco got its third run in the bottom of the ninth. Rodgers tagged Spahn for a one-out single, followed by Hank Sauer pinch-hitting for Shipley and flying out to Bruton for the second out. Davenport’s walk – Spahn’s only one of the game – set up Giants runners on first and second. Kirkland knocked in Rodgers with a single.

San Franciscans may have felt some optimism with Mays coming to bat and runners on first and second, but the slugger’s fly out to left fielder Covington ended the game.

Aaron’s other three times at bat resulted in a strikeout, a foulout to catcher Bob Schmidt, and a fly out to Mays. The troika of homers went “about 380 feet” to the dismay of Giants fans, who winced when Aaron tagged “slow curves” from Antonelli and Miller before crushing Jones’s slider.4

After the victory, Milwaukee led the National League with a 1½-game lead over San Francisco. Haney warned the press that his team needed to sustain these kinds of performances. Success is enjoyable but fleeting during a 154-game season. “But this was just one game,” said the skipper. “We wanted it and the series. We’ll take it. But we still have 90 to 95 games to go, I guess that’s right. I haven’t counted ’em lately.”5

In a 1991 article for the Los Angeles Times, nearly 32 years later to the day, Mathews recalled his teammate’s low-key manner and its impact on notoriety. “When Aaron played, you didn’t even know he was around,” said Mathews, who was the Braves manager when Aaron broke Babe Ruth’s career home-run record in 1974. “He did everything as well as anybody ever did. Then you take Roberto Clemente and Willie Mays, they were more noticeable because they were flashier. Stan Musial was one of those guys like Aaron. You didn’t realize he was there, either.”6

Aaron’s 1959 home-run total of 39 earned him fifth place in the senior circuit; Mathews led with 46. The Braves tied with the Los Angeles Dodgers for the NL pennant and forced a three-game playoff. LA won the first two games to secure the flag, then won the World Series against the White Sox.

3 Pafko had one at-bat with the Class A Binghamton Triplets in 1964. He got a hit.