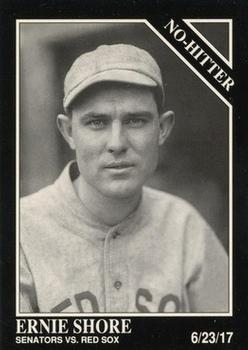 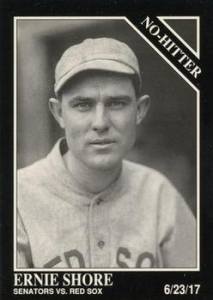 The Boston Red Sox’ Ernie Shore achieved what could be characterized as pitching perfection on June 23, 1917, at Fenway Park, sending every Washington Senators batter he faced back to the dugout for a 4-0 victory.

But Shore’s history-making effort didn’t permanently land alongside major-league baseball’s previous official perfect games thrown by Lee Richmond and John Montgomery Ward in 1880, Cy Young in 1904, and Addie Joss in 1908, as Shore’s amazing accomplishment came in relief of an ornery Babe Ruth, who was ejected from the game after just four pitches.

Ruth – at age 22 one of the American League’s top pitchers in 1917 – got the start in this opener of a Saturday doubleheader for the two-time-defending World Series champions, and the Babe’s temper quickly revealed itself upon his first toss to leadoff batter Ray Morgan.

“Ball,” yelled umpire Brick Owens, earning a glare from Ruth, who entered the game with a 12-4 record and complete games in his previous seven starts.

Three more pitches drew the same call, and the Babe’s irritation grew with each. As Morgan took his free pass to first base, Ruth continued jawing with Owens, according to Boston Globe sportswriter Edward F. Martin.

“Get in there and pitch,” the umpire ordered.

“Open your eyes and keep them open,” Ruth yelled.

“Get in and pitch or I will run you out of there,” Owens warned.

“You run me out and I will come in and bust you on the nose,” the Babe replied.1

Owens and Ruth stayed true to their words. Owens ejected Ruth, and Ruth charged the plate to throw a pair of punches. The Babe’s left missed, but his right hook glanced off Owens’ mask, landing behind the umpire’s left ear. Team benches cleared, and the ensuing scrum prompted players and Red Sox player-manager Jack Barry to drag Ruth off the field.2 Boston catcher Pinch Thomas, who attempted to block Ruth from getting to Owens, also earned an ejection.

Barry handed the ball to Shore, a dependable 26-year-old right-hander who had thrown five innings just two days earlier. Shore had served as a swingman for Boston’s championship teams in 1915 and 1916, starting two World Series games each season and winning three of his four starts, including the Series-clincher over the Brooklyn Robins in 1916.

Shore eked out a five-pitch warm-up and assured his skipper that he was up to the challenge.3 He took the mound and Eddie Foster stepped into the batter’s box.

Morgan, expanding his lead before Shore’s first pitch, immediately tested the arm of replacement catcher Sam Agnew by dashing toward second. Agnew gunned down the sliding Morgan, and Shore had his first of 27 outs.

“I got the next two men on easy grounders,” Shore recalled.4

Shore’s early success provided the confidence to press on, so he returned to the bullpen for additional warmups before sending the Senators down in order in the second. The Red Sox took a 1-0 lead in the bottom of the frame when Agnew plated Larry Gardner on a hard-hit ball to third mishandled by Foster, and Shore continued cruising as the Senators’ offense provided few challenges.

“Shore fanned only two and it did not seem as if he was working hard,” wrote the Boston Globe. “He made a number of nifty plays himself.”5

Defensive gems by shortstop Everett Scott and left fielder Duffy Lewis complemented Shore’s two putouts and six assists. In the fifth inning, Charlie Jamieson hit a comebacker that bounced off Shore’s shin, but Scott raced over to second for a barehanded grab and threw out Jamieson at first. In the top of the seventh, Lewis dashed toward the fence to run down a hard-hit fly by Morgan.

Boston added three insurance runs in the seventh on an RBI double by Agnew and a Harry Hooper single that tallied two more. Shore reached the ninth and retired Howie Shanks before Lewis again preserved the no-no, this time by sprinting in to nab a shallow liner off the bat of Washington’s John Henry.

“Henry drove out what looked to be a sure hit, but Lewis came racing in and smothered the ball,” the Washington Post said.6

Barry threw out Washington’s 27th batter – pinch-hitter Mike Menosky – after snagging a swinging bunt that landed just past the mound. First baseman Dick Hoblitzell’s squeeze of his glove just ahead of Menosky’s arrival sent the crowd of more than 16,000 into a rousing ovation.

“I never pitched an easier game,” Shore recalled decades later. “They tell me I was the first to throw a natural sinker off my fastball. I’d throw it straight overhand, and it would break very sharply. Got its sharpness from a callous I always had on my index finger.”7

The Boston Globe, the Washington Post, and the Washington Evening Star all declared that the game thrust Shore into the “hall of fame” – then a common way to characterize a no-hitter – though the Evening Star stipulated that “Shore’s title to the highest honor had a flaw in it.”8

The Red Sox also held the Senators scoreless in the doubleheader’s nightcap, as Dutch Leonard‘s four-hit shutout powered Boston’s 5-0 victory. Shore’s next appearance was in a starting role; he lost an 11-inning complete game that ended in a 7-6 score.

Ruth – who was suspended by American League President Ban Johnson for one week and fined $100 – returned to the mound on July 3.9 In 13 starts from May 24 through July 19, the June 23 “imperfecto” was the only time Ruth did not pitch a complete game.

Over time, the contest became known as a Shore perfect game, but that flaw of 26 batters faced kept it out of the official record books until 1929.10 Owens recalled an initial “great deal of doubt on the part of the scorers as to whether the door to the hall of fame should be opened to Ernie, a long, lean right-hander. Everyone was glad when it was.”11

The contest’s perfect-game status lasted for 62 years, when it was abruptly downgraded in 1991 to the major leagues’ first combined no-hitter – credited to Ruth (0 innings) and Shore (9 innings).

Baseball’s committee for statistical accuracy, facing a glut of extra-inning-loss and rain-shortened no-hitters that was making the feat seem too common, established the first official definition of a no-hitter, saying, “A no-hitter is a game in which a pitcher or pitchers complete a game of nine innings or more without allowing a hit.”12 The committee, chaired by Commissioner Fay Vincent, also established the official definition of a perfect game. The guidelines require that no member of the opposing team reach base on a walk, error, hit batsman, catcher’s interference call, or a third-strike passed ball or wild pitch.13

With Morgan reaching first on June 23, 1917, Shore’s feat no longer qualified as perfect. Shore never got the news. The baseball star turned Forsyth County (North Carolina) sheriff died in 1980, 11 years before his gem’s reclassification. The committee’s decision likely would have had little impact on Shore’s opinion.

“I realize you can make a good case for the game not being perfect, since I didn’t pitch a complete game,” Shore said. “But how complete is complete? You have to get 27 men out. I got 26 of them out and the other was retired while I was pitching. No other pitcher retired a single batter.”14

2 Stories from the Boston Globe and the Washington Evening Star differ on whether police were involved in escorting Ruth off the field or arrived just as Ruth was removed.