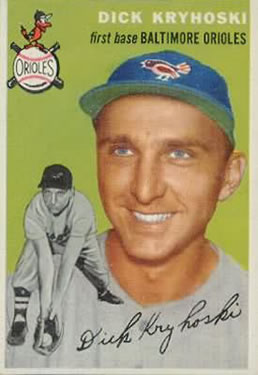 The Baltimore Orioles returned to the American League in 1954 after the St. Louis Browns franchise was sold and moved after their last-place 1953 season.

The Orioles weren’t that much better than the hapless Browns, but managed to escape another cellar finish by the franchise, beating out the Philadelphia Athletics by three games.

On June 23, 1954, an epic battle between the Orioles and the Boston Red Sox took place before a crowd of 24,843 at Memorial Stadium on Interfaith Night.1

Baltimore had a record of 22-42 on that date, and were on pace for a second straight year of 100 losses for the franchise. Boston was also having its problems. The Red Sox were 22-38, just two games ahead of the Orioles.

The previous night’s contest went into extra innings, with the Beantowners edging the Orioles 3-1 in 11 innings, defeating their ace, Bob Turley, who went the distance. That game lasted 3 hours and 35 minutes.

But that was nothing compared to what was to occur this night.

The starters for the game were Joe Coleman for Baltimore and Frank Sullivan for Boston.

The Orioles struck quickly. Cal Abrams worked Sullivan for a leadoff walk in the first. Dick Kryhoski followed with a single to right field, sending Abrams to third, from where he scored on a hit by Chuck Diering. Cleanup hitter Vern Stephens then lined a fourth straight hit to load the bases.

Mele hit a groundball to shortstop Milt Bolling who started a double play that allowed Kryhoski to score. Diering attempted to score from second base and was thrown out at the plate for a triple play.

Baltimore added to its lead in the second inning in a more conventional way when catcher Clint Courtney singled to right and, with one out, light-hitting Billy Hunter did the same. Pitcher Coleman reached base on a force out, with Courtney advancing to third.

With Abrams batting, Coleman took off for second and made it without a throw by surprised Red Sox catcher Sammy White.2 Abrams then singled to center, scoring Courtney with the Orioles’ third run. Coleman stopped at third.

The score remained 3-0 until the top of the fifth, when Boston scored twice. Ted Lepcio singled to lead off the inning and scored from first on a double by Bolling. Coleman then walked Billy Consolo. Pitcher Kiely bunted; Coleman fielded the ball and forced Bolling at third. After Jim Piersall fanned, Karl Olson, subbing for the injured Ted Williams, lined a double to left, scoring Consolo, to cut the Orioles margin to one run. Coleman escaped further damage by inducing Harry Agganis to pop to second.

Baltimore extended its lead in the bottom of the sixth. Hal Brown, who had relieved Kiely in the fifth inning, walked leadoff batter Courtney.3 Bobby Young forced Courtney at second for the first out, but Hunter doubled to left and after Coleman struck out, scored on a single by Abrams, making the score 4-2.

A highlight of the game came in the top of the seventh inning.

Boston threatened to break the game open in a dramatic manner. With one out, Consolo singled to left. With two down, Coleman gave up an infield hit to short by Piersall and walked Olson to load the bases.

Out of the Red Sox dugout strode a familiar figure, swinging two bats, preparing to pinch-hit for Agganis.

It was Ted Williams! The crowd rose to their feet and cheered him for over a minute.

Williams had been out of the lineup for more than two weeks with an injury, but here he was in a clutch situation with the bases loaded. Coleman, however, was up to the challenge, and got Williams to pop up to second baseman Young to end the threat, leaving Baltimore with its two-run lead.

Neither team scored in the seventh, but the Red Sox narrowed the lead to one run in the top of the eighth when White led off with a home run to left field off Coleman. With one out, Coleman walked Lepcio. Lou Kretlow came in from the bullpen and fanned Bolling, but walked Consolo and pinch-hitter Grady Hatton to load the bases. Mike Blyzka relieved Kretlow and struck out Piersall to end the threat.

The Orioles appeared to put the game away in the eighth by scoring three runs. Hunter started it off by reaching first on an error by Bolling. Another miscue by pitcher Sid Hudson on a bunt by Blyzka put two men on with none out. Abrams, who reached base six straight times in the game, came through again with a single to score Hunter.

Kryhoski then followed with a 425-foot triple to deep center field to score two more runs, giving the Orioles what seemed to be an insurmountable 7-3 lead heading into the ninth inning.

The Red Sox came back with a vengeance. Olson led off the ninth with an infield hit off Blyzka. Billy Goodman laced a pinch-hit single to left and Mickey Owen worked a walk to load the bases. With two outs, Don Lenhardt batted for Bolling and drove a double into the left-field corner, clearing the bases and bringing Boston to within a run of Baltimore.4

That was all for Blyzka as Howie Fox came in to relieve. Fox gave up another pinch-hit by Floyd Baker, plating pinch-runner Tex Clevenger with the tying run, capping the four-run rally. All three of manager Boudreau’s pinch-hitters had come through with the big hits to even the score.

The Orioles went down in order in their half of the ninth, and the game went into extra innings. No one in the ballpark thought there would be another “seventh-inning stretch,” but it did occur.

Boston got runners on in the next four innings, but Fox held them scoreless for 6⅓ frames. Ellis Kinder and Bill Henry pitched four innings without giving up a run for the Red Sox.

Finally, in the bottom of the 17th, with Henry on the mound, Orioles pinch-hitter Jim Brideweser led off with a single to right field. Hunter bunted and the ball got by both Henry and second baseman Floyd Baker into right field. Hunter hustled into second with a bunt double and the Orioles had men on second and third with no one out.

Ray Murray pinch-hit for reliever Marlin Stuart and was intentionally walked to load the bases. Henry got Abrams on a foul popup to third for the first out. Kryhoski then hit a groundball to Baker, who slipped and fell to his knees. His throw to the plate was too late and Brideweser slid home with the winning run.5

Regarding Hunter’s two-base bunt, Orioles third-base coach Tom Oliver said in the clubhouse, “I never saw a hitter get a double on such a play.”6

Orioles manager Jimmy Dykes agreed that “it was the toughest way to win one I ever saw.”7

Several American League records were established in the contest.8

The game lasted 4 hours and 58 minutes, an American League record, and was almost suspended because Baltimore City had a 1:00 A.M. curfew that was to take effect in just a few minutes after the winning run was scored.

Six pitchers toiled for Boston, while the Orioles used five. The Red Sox had 19 hits and left 21 men on base. The Orioles had 17 hits and stranded 17. Boston used 22 players, Baltimore, 20. Of the 36 hits by the two teams, White’s home run was the only round-tripper.

The Orioles had an offday after this marathon, and then they swept the Philadelphia A’s in a four-game series, two of which also went into extra innings (10 and 11 innings). The last three games of the series were walk-off victories.

From a triple play that scored a run in the first inning, to a bunt double leading to a victory in the 17th inning, this game had everything a fan could want, especially to those who survived almost five hours of baseball.

Personal note: I was just 14 years old when Baltimore had major-league baseball again, and this was my first major-league night game. My father was not really a baseball fan and after the final out in the ninth inning, said, “OK, the game is over. Let’s go home.” I had a tough time convincing him that when the game is tied after nine innings, it is continued. Being the great dad he was, he hung on to the glorious end.

The author used the box score at Baseball-Reference.com as a primary source of game information. Thanks also to the Enoch Pratt Free Library Archives, Baltimore.

1 Representatives of the three major religions in America – Catholics, Protestants, and Jews – gathered in unity. After an hour of festivities, the Orioles and the Red Sox began the contest at 8:00 P.M. that did not end until after midnight.

2 Mickey Owen (of World Series infamy) replaced Sammy White in the eighth inning behind the plate after White had to return to Boston, where his three-year-old son suffered a broken leg when struck by a car. It was to be Owen’s last season in the major leagues. Boston Globe, June 24, 1954: 13.

3 Hal Brown became an Oriole the next year and spent eight seasons in Baltimore.

4 Don Lenhardt, who had a big hit for the Red Sox in the ninth inning, had been purchased from the Orioles on May 12.