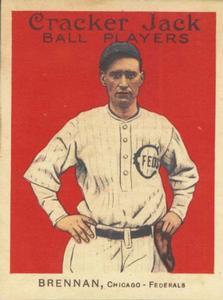 The 1913 National League championship was decided not in the final days of the season, but on the final day of June. On June 30 the swaggering New York Giants overcame an early five-run deficit to beat the first-place Philadelphia Phillies in the 10th inning, 11-10 at Baker Bowl. Jim Nasium of the Philadelphia Inquirer dubbed it a “sandlot exhibition,”1 because the teams combined for 10 errors, 21 runs, 27 hits, and numerous misplays. The New York Times was no kinder, accusing both squads of stress-induced erratic play. By prevailing in this up-and-down game, the Giants passed Philadelphia in the league standings, gaining a lead they would never relinquish.

Despite the excitement and significance of the game, it was an incident occurring after the final out that changed the contest from a sports-page story to a front-page story. During the game, Giants manager John McGraw taunted the Phillies’ bench from his spot in the third-base coaching box, directing the worst of his vitriol at Ad Brennan, a Phillies pitcher. As the teams left the field, McGraw pointed at Brennan and made another remark. An irate Brennan knocked the legendary manager unconscious.

McGraw was taken to a local hospital, but it was Philadelphia who never recovered. New York defeated the demoralized Phillies three more times before leaving town and, like a spark from a fire, quickly flew beyond Philadelphia’s reach.

For this crucial encounter, the Phillies sent Tom Seaton to the mound to oppose Jeff Tesreau of the Giants. Neither pitcher was effective. Tesreau gave up five runs on six hits and a walk in three innings; Seaton went seven innings, and gave up 12 hits, 4 walks and 10 runs.

The Phillies scored in the first when Dode Paskert led off with a triple and Otto Knabe singled him home. In the third Philadelphia scored four more times, with Paskert again leading the way. After Paskert walked, Knabe sacrificed him to second, and Hans Lobert’s single brought him home. Sherry Magee singled, advancing Lobert. Gavvy Cravath singled Lobert home, and when Fred Snodgrass let the ball roll through his legs, Magee scored and Cravath continued to third. Cravath tallied the fourth run of the inning on Fred Luderus’s long sacrifice fly, extending the score to 5-0. That ended Tesreau’s day, and Hooks Wiltse pitched the next three innings for New York.

Things began to turn around when the Phillies handed New York three runs in the fourth inning. With one out, Fred Merkle reached second base when Magee dropped his easy fly ball. Merkle went to third on a fly to center, and scored the Giants’ first run when Seaton unleashed a wild pitch.

Philadelphia was just as generous in the fifth. After Tillie Shafer walked, Art Fletcher singled to right field. Cravath fielded Fletcher’s ball and threw it back to the infield, but shortstop Mickey Doolin let the throw get away, allowing Shafer to go to third and Fletcher to second. After a strikeout, Seaton intentionally walked Merkle to set up a possible double play. A sacrifice scored Shafer. Meyers hit a long fly to right-center, which Paskert gloved after a long run, but dropped. Fletcher and Merkle scored, and the stunned Phillies trailed 6-5.

The Phillies drew even in the bottom of the fifth thanks to Lobert’s baserunning. He led off with a hit that bounded high off home plate. Wiltse fielded it, but in his haste to get Lobert, he threw the ball into right field. Lobert sped to third base. He was still on third base two outs later, when he made a daring decision. With Luderus batting, Lobert dashed for home, and scored the tying run by knocking the ball from Meyers’ glove.

Neither team scored in the sixth, but in the seventh New York added four runs, and Philadelphia three. Both teams benefited from shoddy defense.

After retiring the first New York batter of the seventh, Seaton walked Larry Doyle and Merkle. Red Murray hit a hard grounder to Luderus who threw to Doolin at second in hopes of turning a double play. Instead, Doolin dropped the ball, allowing Doyle to score. Meyers singled—his third hit—to score Merkle, and Snodgrass singled in Murray. Wiltse made the second out, but George Burns beat out a grounder to deep short, scoring Meyers, and putting the Giants ahead 10-6.

The Phillies bounced back in the bottom of the frame. Lobert raced to second when Doyle failed to field his grounder. He stopped at third on a single by Magee. Cravath smashed a double to the wall, bringing Lobert and Magee home, and Christy Mathewson in to pitch. Back-to-back groundouts scored Cravath, to bring the Phillies within one run at 10-9.

Philadelphia tied the game in a controversial eighth inning, which may have pushed emotions over the edge. Doc Miller pinch-hit for George Chalmers, who had pitched a scoreless top of the eighth for the Phillies. Miller singled to right, and Cozy Dolan ran for him. Paskert lined out to Doyle, who threw to first attempting to double up Dolan. The ball hit either Dolan or the bag and bounded away. Dolan jumped to his feet, heading toward second, only to run into Merkle: a collision apparently seen by everyone but the umpire.

Dolan eventually untangled himself from Merkle to reach second base, “but there was a general uprising of Philadelphia players on the field,” pleading for their teammate to be awarded third base.2 As the argument raged, Dolan mooted his case by darting to an unattended third base. Mathewson spotted him, and, with ball in hand,3 tried to outrun Dolan to third. Mathewson dived at him, but Dolan was safe with a stolen base. Dolan completed his eventful trip around the diamond when Knabe grounded out, tying the game at 10-10. Pete Alexander, the Phillies’ ace, took the mound as the ninth inning began.

Neither team scored in the ninth, but the Giants scored one in the 10th to capture the game, and first place. Once more, they benefited from a defensive lapse. Snodgrass started the inning with an unremarkable roller to the left side of the infield, but reached first with a single when Lobert and Dolan “ran together”4 while trying to field the ball. Groundouts by Mathewson and Burns got Snodgrass as far as third base, and he scurried home with his team’s 11th run when Buck Herzog singled over the shortstop’s head. There was no Philadelphia rally this time, and the Giants won 11-10. Mathewson (14-4) pitched four innings to earn the win, allowing just one hit and one run. Alexander (11-3)—betrayed by his infield—was the losing pitcher.

After the final out, fans were on the field and players from both teams mingled as they walked toward the clubhouse located in center field. McGraw allegedly pointed at Brennan, who was ahead of him, and said, “That’s the fellow I am after, and I am going to get him.”5 Brennan turned around as McGraw got closer and struck him in the face “with a left and a right,”6 sending him unconscious to the turf. McGraw was taken to a hospital, then was under the care of a physician at his hotel. He was observed to be cut “and his cheek and jaw are badly swollen and discolored.”7

The Philadelphia Inquirer wrote that things became heated after Lobert’s fifth-inning steal of home and boiled over during the unruly eighth inning.8 Initially it was alleged that multiple Philadelphia players, and perhaps some fans, were involved in the assault.9 That proved untrue. National League President Thomas Lynch found both men at fault, suspended both Brennan and McGraw for five days, and fined Brennan $100.10

The Giants won the next three games at Baker Bowl by scores of 10-0, 8-4, and 4-2 in 11 innings. Alexander followed his June 30 loss in relief by starting and losing games two and four of the series. New York departed Philadelphia with a 3½-game lead over the Phillies and an eight-game winning streak. New York ultimately extended the winning streak to 14, and by the end of July, it could boast of an 8½-game lead over the second-place Phillies.

Philadelphia (88-63) remained in second place when the 1913 season ended, claiming its best finish since 1901. The Giants (101-51) handily won their third straight NL pennant, only to lose a third consecutive World Series. The other Philadelphia team, the Athletics, beat them four games to one.

3 The New York Times account had the ball lying on the infield before being grabbed by Mathewson. The New York Sun said Mathewson had been holding the ball in his mitt throughout the argument. The Philadelphia Inquirer was silent on the subject.