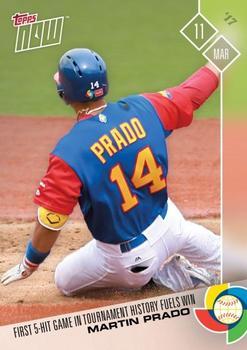 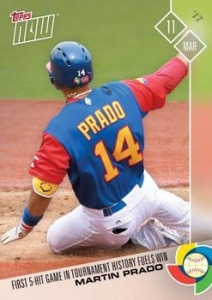 Both Venezuela and Italy had allowed lots of runs in their first games in the 2017 World Baseball Classic Pool D in Zapopan, a suburb of Guadalajara in Jalisco, Mexico.1

The difference was that Italy had scored 10, half of them in the bottom of the ninth, in a 10-9 win against Mexico. Venezuela, by contrast, had been shut out on three hits in an 11-0 loss to Puerto Rico, having little success against curveballing Seth Lugo and two others.

In the early stages of its Saturday afternoon game against Italy, played on March 11, less than 24 hours after being blanked by Puerto Rico, Venezuela continued to be flummoxed by an opposing pitcher. The curves of Italy’s Sam Gaviglio held Venezuela scoreless for another four innings, but Venezuela finally found its hitting groove, turning the game into Italy’s second thriller in as many contests.

Italy built a hearty lead in the early innings, scoring a first-inning run on doubles by Francisco Cervelli and Daniel Descalso off Martin Perez. The Italian pair teamed up again in the third, with Cervelli lining a two-out single to right and stopping at third on a double by Rob Segedin. Descalso then singled both home for a 3-0 lead.

Italy added two more the next inning on solo homers by Alex Liddi and Brandon Nimmo, the first off Perez and the second off Bruce Rondon.

At age 26, Gaviglio had gone no further than Triple A in the St. Louis Cardinals and Seattle Mariners organizations as of the 2017 WBC.2 Against Venezuela’s star-studded lineup, the right-hander started off with a scoreless first but threw 23 pitches, over a third of the 65-pitch limit in the WBC’s first round.

He settled down and got through the next three innings with only 31 pitches, although he needed a little help from his teammates. Odubel Herrera walked with one out in the second and was running on the pitch as Alcides Escobar hit a short pop fly back of first base. First baseman Chris Colabello caught it but overthrew Gaviglio covering first. Catcher Cervelli, however, retrieved the ball and threw to Descalso, hustling from second to cover first, to double off Herrera.

With two out in the third, Martin Prado singled to left but was thrown out by Segedin trying to stretch it.  Carlos Gonzalez walked with one out in the fourth, but Victor Martinez grounded to Colabello, who stepped on the bag, then threw to shortstop Gavin Cecchini for the tag at second, completing the reverse-force 3-6 double play.

Still trailing 5-0, Venezuela finally broke through in the top of the fifth. Salvador Perez led off with a double, moved to third as Herrera flied out to Nimmo in deep center, and scored on a single by Escobar. Ender Inciarte sent Nimmo back with another deep fly, and manager Marco Mazzieri decided that was enough for Gaviglio, who now had thrown 61 pitches, just four shy of the limit set for the first round.

Venezuela evened it in the sixth. Gonzalez led off with a single to right but tried for second and was thrown out by John Andreoli when he overslid the base. Martinez grounded a single to center, and A.J. Morris relieved Da Silva.  Perez flied to Nimmo for the second out, but Herrera was hit by a pitch. Yangervis Solarte ran for Martinez and scored, along with Herrera, on Escobar’s double to tie the game at 5-5.

Michael DeMark took the mound for Italy in the top of the seventh, and the carnage continued. Shortstop Cecchini was charged with an error when he missed a hard grounder by Altuve. Prado lined a single to left, and Altuve, who held up to make sure the ball got through, was called safe at third on a play close enough to bring Mazzieri out to argue.3 During the rhubarb, the gorilla mascot for the Charros (the winter-league team that plays in the ballpark) was working up the fans in the right-field bleachers.4

Miguel Cabrera, who had played for Venezuela in all three previous WBCs, lined a single to left that brought in Altuve with the go-ahead run and chased DeMark. Thomas Layne was greeted by a double by Gonzalez that scored Prado. After Martinez grounded out with the runners holding, Perez was intentionally walked to load the bases.5

Herrera grounded to Descalso, who ran in, fielded the ball, and fired home for a force, but Cervelli couldn’t handle his one-hop throw. Descalso was charged with an error as Cabrera scored to give Venezuela an 8-5 lead—the eighth run of their three-inning surge. Layne struck out Escobar and Inciarte, the latter chasing a pitch in the dirt that was blocked by Cervelli, who corralled it and stepped on the plate to force out Gonzalez and end the inning.

Scoreless since the fourth, Italy struck back in its half of the seventh. Nimmo and Andreoli walked to start the last of the seventh. After a pitching change—Robert Suarez relieving Jose Alvarado—Cervelli singled to center to score Nimmo. When Inciarte fumbled the ball and then dropped it, Andreoli also scored on the play, cutting Venezuela’s lead to 8-7.

Italy’s equalizer came an inning later. Drew Butera led off the eighth with a walk off Jose Alvarez and one out later was awarded second when Prado made a nice catch of Nimmo’s foul popup but fell into the stands after the catch. Veteran closer Francisco Rodriguez—like Cabrera, playing in his fourth WBC—relieved but gave up a game-tying single to Andreoli.

Ambidextrous Pat Venditte, who had finished off the top of the eighth with a strikeout and pickoff, came back out for the ninth and struck out Cabrera. When left-handed-hitting Rougned Odor came out to pinch-hit, Venditte switched to his left arm, which didn’t work as Odor lined his first pitch for a double to right.  Going back to right-handed pitching, Venditte had no better luck as Perez homered to left center for a 10-8 Venezuela lead.

With Venezuela three outs from a win, Segedin reached second on a throwing error by Escobar at shortstop to begin the bottom of the ninth. Groundouts by Descalso and Colabello brought him home, but Italy was still a run behind and down to its last out.

Butera hustled for third and continued with a mad dash for the plate as Inciarte heaved a throw in that went over Escobar. Rodriguez scrambled to retrieve the ball to the left of the mound. He bobbled it and threw to Perez. With an awkward slide, Butera crashed into Perez, who held the ball for the final out of the ninth.

Venezuela had survived and sent the game into extra innings but ended up with two players on the ground.  Rodriguez had injured himself making the game-saving play, and Perez was hurt in the collision with Butera (who was Perez’s backup as catcher with the Kansas City Royals).6

Vizquel’s team made the most of its second chance. In the top of the 10th, Altuve singled off Trey Nielsen, and Prado delivered his fifth hit of the game, a run-scoring double to left that turned out to be the final tally in a wild game. Jose Castillo retired Italy in order in the bottom of the inning for an 11-10 Venezuela win.

The game lasted 4 hours 43 minutes (the first nine innings took 4:16) and was ended before the teams would have started using automatic runners in the 11th inning.7

Both Italy, which would next face Puerto Rico, and Venezuela, with a game coming up against Mexico, were 1-1 in the WBC.

I served as official scorer for all games in Pool D, including this one. The Cecchini error in the seventh was one that I questioned myself about—something official scorers often do.

It was not until the next day that I learned that the scoring decision could affect which team advanced to the next round. The top two teams in each pool advance to the next round. In case of a three-way tie for second, two teams would play a tiebreaker game with the other one eliminated based on a tiebreaker criterion that first looked at runs allowed per innings in the field and then at unearned runs allowed per innings in the field. When the scheduled games were completed, Mexico was eliminated by a thin margin, leaving Venezuela and Italy to play in the tiebreaker game.

So close were the differences that the impact of a hit-or-error decision could have affected which team was left out. I was happy to have been ignorant of the implications when I charged Cecchini with the error. Scorers can agonize and question themselves enough without knowing that the fate of a team in a world tournament may rest on their calls.

The article was fact-checked by Kevin Larkin and copy-edited by Len Levin.

Scoresheet, notes, and memories of the author, who was the official scorer for the games in the Jalisco pool.

Brenda Himrich (related to the author by marriage) made the press-box announcements in Spanish and English in Jalisco and contributed to this article.

2 Gaviglio, who grew up in Ashland, Oregon, made his major-league debut in June 2017 with Seattle. From 2017 through 2020, he pitched in 98 major-league games with the Mariners, Kansas City Royals, and Toronto Blue Jays.

3 In the first and second rounds, video review was used only for plays involving home runs or potential home runs.

4 The gorilla’s antics drew a threat of ejection from the WBC staff, which was already fed up with some of his/her/its behavior.

6 X-rays showed that Perez had an inflammation but no structural damage to his knee.