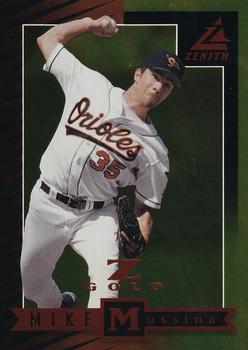 Injuries on the field have always been part of baseball. There are the common sprained ankles, pulled muscles, and arm injuries. But the scariest injuries often occur when a ball is smacked back up the middle at the pitcher. After finishing his delivery, the pitcher is less than 60 feet from the plate with very little time to react when a baseball is lined back at him at a speed often exceeding 100 mph.

The most famous of these injuries occurred on May 7, 1957, when New York’s Gil McDougald lashed a liner back up the box in the first inning, striking Cleveland’s 23-year-old left-hander Herb Score flush in the right eye. At the time of the injury, Score had a career record of 38-20. He recovered from the injury but was never the same pitcher, finishing his career in 1962 with a record of 55-46.

Baltimore right-hander Mike Mussina joined this unfortunate injury list on May 14, 1998, in the final game of a two-game series against Cleveland.

The Orioles had taken the first game by an 8-1 score to improve their record to 20-18. They had started the season 10-2 but won just four of their next 15 games with Mussina on the disabled list because of a wart on his right index finger.1

Since Mussina’s return on May 3, Baltimore was 5-4. They were in third place in the AL East Division, but already 8½ games back of the New York Yankees, who were off to an incredible 26-7 start.

Cleveland, the AL’s pennant winner in 1997, also had a 20-18 record. They had lost six straight but still led the AL Central Division by four games over the Chicago White Sox and Minnesota Twins.

Mussina started the game strong, getting Kenny Lofton to ground out and striking out Omar Vizquel. After a walk to David Justice on a 3-and-2 pitch, he whiffed Jim Thome.

But beginning in the bottom of the second inning, it became obvious that Mussina lacked his normal control. Manny Ramirez led off with a single and Sandy Alomar Jr. walked with one out. Travis Fryman grounded a single to left to fill the bases. Mussina struck out David Bell for the second out, but Lofton lined a single to right to give Cleveland a 2-0 lead. The runs ended Mussina’s streak of 17 consecutive scoreless innings.

With one out in the third inning, Mussina allowed a solo homer on an 0-and-2 pitch to Thome. After Ramirez struck out swinging, Brian Giles singled and Alomar doubled, but Mussina escaped further damage by getting Fryman to line out to second base.

Nagy cruised through the first two innings, giving up just a single to Brady Anderson to lead off the bottom of the first and a two-out walk to Harold Baines in the second.

He ran into trouble in the third. Mike Bordick led off with a double but was caught in a rundown and tagged out when he tried to take third on Anderson’s grounder back to Nagy.

Anderson, however, swiped second and scored when B.J. Surhoff doubled down the right-field line. Roberto Alomar singled to put runners at the corners. Rafael Palmeiro and Joe Carter followed with RBI singles to tie the game 3-3.

After Palmeiro and Carter moved up on a weak groundout by Cal Ripken Jr., Nagy intentionally walked Baines to load the bases; he ended the inning when Chris Hoiles popped out to shortstop to keep the game tied.

Mussina retired the Indians in order in the top of the fourth. The Orioles took the lead when Bordick led off the home half with a home run to deep left against Nagy. Bordick’s blast marked the 16th straight game with a homer for the Orioles, one short of the team record.4

After pitching a perfect fifth inning, Mussina started the sixth by retiring Giles on a groundball to second for his eighth consecutive out.

Sandy Alomar was up next. Before this at-bat, his most memorable plate appearance against Mussina had occurred nearly one year earlier. On May 30, 1997, Alomar’s one-out single in the top of the ninth ended Mussina’s quest for a perfect game.

This time, the result of his at-bat could have ended Mussina’s career.

With a count of 0-and-1, Alomar lined an outside fastball back toward the mound, where Mussina was still finishing his follow-through from the pitch.5

Mussina admitted later to Baltimore manager Ray Miller that he never saw the ball coming. Fortunately, he ducked his head just enough that the blow struck him first above the right eye and then on the nose.6

Mussina immediately dropped to the ground, bleeding heavily, as his teammates rushed to the mound. As the stunned crowd of 43,039 sat silent, Orioles trainer Richie Bancells attended to Mussina, applying pressure to the wound.

Baltimore bench players in the dugout were visibly shaken and sat motionless, many staring at the floor.7 First-base coach Carlos Bernhardt rested his head on his hands and appeared to be crying.8 Center fielder Anderson stood against the outfield wall with his head down.9

After reaching first base with a single, Alomar knelt on the bag before approaching the mound. “I never hit anybody like that before,” he said later. “It was very scary and I was so nervous. I was shaking and praying to God for Mike and his family.”10

Mussina never lost consciousness and eventually walked off the field under his own power; he was taken to the medical center for tests and X-rays, which revealed no serious head or eye injuries. But he did have a hairline fracture of the nose and a mild concussion; the gash over his eye required 16 to 20 stiches.11

Although the game was now an afterthought, play resumed with Arthur Rhodes taking Mussina’s place on the mound;12 just six pitches later Fryman homered to give Cleveland a 5-4 lead.13

Cleveland had a chance to blow the game open in the top of the eighth. With two outs, Baltimore reliever Alan Mills walked Bell. Lefty Jesse Orosco came in and gave up a single to Lofton and a walk to Vizquel to load the bases before striking out Justice on a full-count pitch.

Baltimore threatened in the bottom of the eighth against Jose Mesa when Baines singled with one out14 and Bordick bunted for a two-out hit, but Cleveland manager Mike Hargrove brought in left-hander Paul Assenmacher, who retired Anderson on a pop fly to shortstop.

Assenmacher retired the first two batters in the ninth before Palmeiro doubled off the center-field wall; he was stranded when Michael Jackson retired Carter on a popup to shortstop to end the game.15

Afterward, all the talk was about Mussina’s injury.

“You hate to see that happen, but it’s part of the game,” said Orioles manager Miller. “It seems like we’ve had nothing but freak things16 happen to us.”17

Miller continued, “When I got to Mike the first thing I said was, ‘Are you with me?’ He looked up and said, ‘Yeah, but it really hurts a lot.’”18

Baltimore Hall of Famer Jim Palmer said the blow to Mussina’s face was the worst he had ever seen.19

Ripken, who had just played in his 2,517th consecutive game, said that the injury brought out an ugly side of the game that “we all know is there but try to forget. You couldn’t go out and play if you thought about something like that happening again to yourself, a teammate or any other player.”20

“You never want to see that and that one was especially nasty,” said Cleveland manager Hargrove. “It hit flush. You heard the sound it made and saw him drop to the ground and [knew] it was not good.”21

“It goes beyond baseball when something like this happens,” said Mussina’s catcher, Hoiles. “There’s nothing you can do but hope and pray Mike will be OK after all this. It’s really a horrible thing and it’s extremely tough on everybody.”22

Mussina’s brother, Mark, attempting to lighten the mood, joked, “I always said I was better looking than Mike. This makes the gap wider.”23

Unlike Score, Mussina regained his old form. After a stint on the disabled list, he returned on June 6 against Atlanta.24 He finished the season with a 13-10 record and a 3.49 ERA in 29 starts.

After the 2000 season, Mussina left Baltimore to join the New York Yankees25 for the final eight seasons of his career. In his last start, in the first game of a doubleheader on September 28, 2008, he fired six scoreless innings against Boston at Fenway Park to earn the 270th and final win of his career. The victory was also Mussina’s 20th of 2008, giving him his only 20-win season.26

While visiting Washington with a group of Arkansas middle-school students and their parents for a national mathematics competition, the author took the train north and watched this game from the standing-room only area in right field above the out-of-town scoreboard.

4 Strauss, “Liner Breaks Mussina’s Nose.” The streak reached 19 games before they failed to homer against Tampa Bay on May 18.

12 Miller had asked the home-plate umpire for permission for Rhodes to warm up in the bullpen while the Orioles composed themselves. Associated Press.

13 Rhodes took the loss, his second in relief in three games. On May 12, he had allowed three runs in a loss to the Twins.

15 The loss was the first of a nine-game losing streak for Baltimore. It was also the eighth straight one-run game the Orioles had lost dating back to April 15.

16 Mussina was the third Orioles pitcher hit by a batted ball in three weeks. Norm Charlton was struck in the nose on April 30 in Chicago and Doug Drabek was stuck in the chest on May 8 in Tampa Bay. Both had deflected the ball with their glove and missed no playing time. Joe Gross, “Mussina May Not Have to Go on DL,” Annapolis Capital, May 16, 1998: B3.

24 Mussina gave up 8 earned runs in 4⅔ innings and took the loss.

26 If Mussina had not picked up the victory in his final start he would have retired with the most wins by a pitcher who never had a 20-win season.