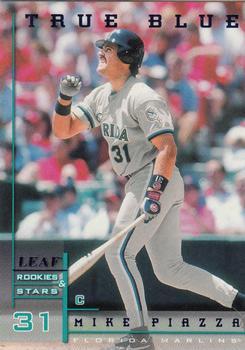 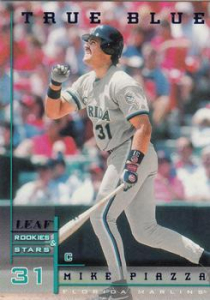 After a whirlwind six days that saw Mike Piazza traded from the Los Angeles Dodgers and join the Florida Marlins in St. Louis for his first three games with the Marlins, the slugging catcher finally found himself with a true offday after the team flew home.

The Miami area was where Piazza made his offseason home—specifically, Boynton Beach,1 about 50 minutes north of Pro Player Stadium, the Marlins’ home ballpark. He had also played college ball at the University of Miami and Miami-Dade North Community College, so his new city was not an unfamiliar one.

“There was no need for any hotel here,” he said, “and I just took in Todd Zeile [who had accompanied Piazza in the deal with Los Angeles] with me and we have two golf courses and two Jet Skis and I really can’t complain.”2

But while the team had a rare Tuesday off from playing baseball, the trade rumors surrounding Piazza did not abate. Almost from the moment the trade to the Marlins was announced, the media began speculating that it would be a short stay, because the defending World Series champions were shedding salary. On Wednesday, May 20, 1998, the morning of Piazza’s first home game as a Marlin, the front sports page of the Miami Herald delved into the team’s efforts to trade the slugger under the headline, “Piazza wanted, but at what price?”

“The humane thing for the Marlins to do with Mike Piazza and Todd Zeile would be to ship them out of South Florida as soon as possible, so as not to subject a couple of innocent bystanders to the tragedy that is the 1998 Marlins any longer than necessary,” Dave Sheinin’s article began. It went on to name “at least seven” suitors: the Baltimore Orioles, Anaheim Angels, New York Yankees, San Diego Padres, Arizona Diamondbacks, Chicago Cubs, and Colorado Rockies.3 One of those teams, Arizona, was Florida’s opponent that night for Piazza’s debut in the Marlins’ pinstriped home uniforms.

While teams usually would promote the acquisition of a player of Piazza’s caliber and fans would celebrate the new superstar in the lineup, the mood around Miami remained bleak, the expectation being that Piazza would soon be shipped off to another team, in the same manner as most of the other experienced members of the roster since the Marlins won the 1997 World Series. “I can’t blame the fans if they’re mad,” manager Jim Leyland said. “Who knows? If, five years from now, this saves the franchise, maybe people will change their minds. But right now, I don’t blame anybody for being upset.”4

Piazza tried to convince the public otherwise. “I think the fans should come out and support this team,” he said. “Because the guys who are here are trying hard. You see a lot of hustle out there. It’s unfortunate that the World Championship team has to dismantle the club, but the kids here are playing hard, and it’s a pleasure to be playing with them.”5

The fans weren’t swayed. With the temperature reaching the upper 80s,6 few people made it out to the ballpark early to watch Piazza warm up for his first home game; one reporter counted fewer than two dozen in the seats when Piazza took his first cuts in the batting cage.7 The recorded attendance for the game was 17,560—or about one-third of the stadium’s capacity for baseball—and two attendees were pictured in the paper with paper bags over their heads, one saying, “Trade ME Next,” and the other, “From CHAMP$ to CHUMP$.”8

Leyland batted Piazza fourth in his lineup against Arizona left-hander Omar Daal, who had been Piazza’s teammate in Los Angeles from 1992 to 1995. Selected by the Diamondbacks in the expansion draft the previous November, Daal was making his third start after beginning the season in the bullpen.

Arizona didn’t score in the top of the first, and Daal had his catcher, Kelly Stinnett, to thank for Florida’s scoreless half of the opening frame. John Cangelosi led off with a single but was caught stealing second. Edgar Renteria walked and took second on Mark Kotsay’s single.

With Piazza at the plate, Renteria took off for third but stopped after only a few steps. Kotsay had followed Renteria’s lead but had to scramble back to the bag when Stinnett threw to first. Kotsay was safe, but Renteria was caught in a rundown for the second out.9 The caught-stealing went into the scorecard as a 2-3-5-6 putout. Piazza turned out to be the only batter retired by Daal in the first inning when he grounded out to shortstop.

Florida starter Andy Larkin, who had a 39-game major-league career from 1996 through 2000, set down Arizona in order in the second, and the Marlins continued to see the ball well against Daal. Zeile opened the bottom of the inning with a double to left. Derrek Lee struck out, but Cliff Floyd doubled Zeile home and scored when the next batter, Craig Counsell, lined a single to right. Florida led, 2-0, but Daal escaped the inning by picking Counsell off at first and striking out Larkin.

The Diamondbacks got one back in the third when Brent Brede led off with a triple and scored on a single by Andy Fox. That strikeout of Larkin seemed to settle Daal down; it began a run of 12 in a row he retired into the bottom of the sixth. Piazza was the fifth out of that string, popping out to the second baseman leading off the fourth.

Arizona put the game away in the fifth—with some help. With the team down 2-1, Stinnett led off with a double. Brede singled, and center fielder Cangelosi’s fielding error allowed Stinnett to score and tie the game. Larkin then walked Daal on a full count and got Fox to pop out to second. Jay Bell reached on an error by Renteria, the shortstop, to load the bases. Devon White struck out, and Larkin had a chance to get out of the inning with the score tied.

But Travis Lee walked on five pitches to force Brede home with the go-ahead run. Larkin then fell behind Matt Williams 2-and-0 before the Diamondbacks’ third baseman hit the seventh of his 12 career grand slams. Arizona led 7-2, with all six runs in the inning unearned.

“I just didn’t—and it seems like I’ve said this before—give my team a chance to win,” Larkin said after the game. “I threw a two-seam fastball to Williams, and it ended up going straight. It didn’t sink like I wanted it to.”10

It was all the runs the Diamondbacks needed. The Marlins got one back in the sixth when Kotsay and Piazza singled with two outs and Zeile walked to load the bases. Clint Sodowsky came in from the bullpen to replace Daal and hit Lee with his first pitch, forcing Kotsay home to make it 7-3. But Floyd fouled out to end the inning, and the Marlins went down in order in the seventh and eighth.

Piazza got one more at-bat, facing Russ Springer with two outs and nobody on in the bottom of the eighth, but popped out again to second. He finished his first Marlins home game 1-for-4, seeing just nine pitches the entire game. The catcher known more for his hitting than his defense also caught Fox attempting to steal second in the first inning, making him 2-for-2 in throwing out potential basestealers since joining the Marlins.

Florida threatened in the ninth, loading the bases on a walk to Zeile, a single by Floyd and a walk to Counsell. But veteran reliever Gregg Olson, who had come on to face Counsell, struck out Todd Dunwoody and induced a groundball to second from pinch-hitter Gregg Zaun to close out the Diamondbacks’ 7-3 victory.

Arizona improved to 5-2 against the defending World Series champs—compared to just 8-30 against all other opponents—and clinched the season series between the two teams.

“We won, that’s all that matters,” Williams said. “The better we play, it allows us to relax a little. We’ve been hitting the ball pretty well and have been getting great pitching. The fact that we came back tonight, tied it up and went ahead is a good sign.”11

In addition to the sources cited in the Notes below, the author also consulted Baseball-Reference.com and Retrosheet.org for pertinent information, including the box score and play-by-play.

4 Dan Graziano, “Summer Flock Buster Gets Two Thumbs Down,” Palm Beach Post, May 20, 1998: 1C. Leyland was a bit prescient here, because the Marlins would win the World Series again five years later, in 2003.

7 “Mike Piazza on the Breakup: ‘I Won’t Lie and Say I Wasn’t Heartbroken.’”