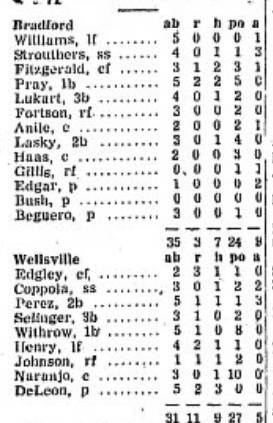 The 1957 Bradford Blue Sox1 represented a second—and last—chance at pro baseball for the north-central Pennsylvania city of 17,000 residents. Bradford hosted teams from 1939 to 1955 in the New York-Penn’s predecessor, the PONY League. But the 1956 Bradford Yankees closed up shop only 12 games into the season, with a 3-9 record, after the parent New York Yankees declined their request for $10,000 in financial support.2

New ownership, led by a Philadelphia businessman, Harold “Chip” Shapiro, paid the old team’s debts, independently assembled a roster, and persuaded the league to bring Bradford back for 1957.3 An Associated Press story in December 1956 identified Zeke Bonura as Bradford’s manager, a story club owner and President Shapiro stuck to.4 But Bonura never showed, and when the season started, Shapiro doubled as manager despite a reported lack of playing experience.5

Fan interest stayed low. One cold night in early May, the Blue Sox drew two dozen people.6 The league took over the team on May 15, less than a month into the season, after ownership failed to meet financial obligations. League President Vince McNamara twice asked Major League Baseball for a $5,000 grant but was refused.7 A last-ditch meeting of 100 people at a hotel in Bradford failed to raise backing to keep the team in town.8

As rumors circulated about a move to Hornell, New York, the club kept playing as wards of the league. The Blue Sox played their last home game before 100 fans on May 21, losing to Jamestown 7-3 in a contest called for darkness after eight innings.9 The next day the league announced that Bradford would play its final game that night.10

Bradford’s last opponent was the Wellsville (New York) Braves, a Milwaukee affiliate managed by former Phillies infielder Alex Monchak. The Braves entered the game in second place at 14-6, 2½ games behind Corning. Bradford sat eighth and last at 5-14, 11 games out.11 The game was moved from Bradford to Tullar Field in Wellsville.

Shapiro, Bradford’s president and field manager, lost both jobs when the league reclaimed the team. The league gave control of the Blue Sox to Earl Johnson, identified in news stories as a former minor-league player, former publicity director of the Buffalo Bisons minor-league hockey team,12 and a “Buffalo sports figure” willing to invest in the ballclub.13 With no other skipper mentioned in news reports, Johnson’s role presumably included managing the final week of Blue Sox games.14

No one on the Blue Sox reached the major leagues. Eugene Edgar, a right-hander from the Buffalo area,15 started the final game. The only Brave to reach the big leagues was Corky Withrow, who appeared in six games for the 1963 Cardinals.16 Withrow hit fifth and played first base on May 22. Twenty-five-year-old17 righty Luis DeLeon started for Wellsville, bringing a 5-0 record into the game.18 DeLeon compiled a 17-5 record and a 2.36 ERA for the full year and had thrown a no-hitter only 10 days earlier.19 He never reached the big leagues. But his son, also named Luis, pitched seven seasons in the majors with four teams in the 1980s.20

The first three Wellsville batters produced the game’s first run. Center fielder Joe Edgley walked, took second on a groundout, and scored on a single to center field by second baseman Chico Perez. Perez went to second when center fielder Jim Fitzgerald misplayed his hit for an error, but fly outs by third baseman Dan Selinger and Withrow stranded him there.21

Wellsville came back in the second22 to collect all the runs they needed that night. Left fielder Cal Henry singled and right fielder Harry Johnson walked. A sacrifice advanced them one base. Pitcher DeLeon singled Henry home to make it 2-0, with Johnson thrown out trying to score. Edgley walked, and shortstop Dan Coppola singled to right to drive in DeLeon for a 3-0 lead. Edgley and Coppola pulled off a double steal to make it 4-0, with Coppola beating the Bradford catcher’s throw to second.23

Bradford scored a run in the fourth as first baseman Don Pray singled, advanced on a passed ball, and scored on a single to right field by second baseman Ron Lasky. Wellsville responded by dropping seven runs on the Blue Sox in the bottom of the inning. Remarkably, the Braves collected only two hits, by DeLeon and Edgley. Seven walks and a throwing error by shortstop Phil Strouthers24 handed the Braves an 11-1 lead after four.25

Bradford starter Edgar exited in the fourth after giving up five hits and five earned runs, walking six, and striking out none. Reliever Wallace Bush retired one hitter and gave up three walks before leaving, charged with three earned runs. Another reliever, Dodo Peguero,26 took over the rest of the way. He surrendered four hits and three walks in 4⅔ innings, but no earned runs.27 The Braves threatened against Peguero in the sixth, collecting two extra-base hits. Right fielder Johnson doubled, but was thrown out trying to advance on a fly out. DeLeon tripled for his third hit of the ballgame but was stuck there when Edgley made the third out.

A rally in the eighth made the score slightly less embarrassing for the Blue Sox. Center fielder Fitzgerald singled through the right side of the infield. After Fitzgerald stole second, Pray ripped a triple to right-center field to score him. Third baseman George Lukart drove in the final run in Bradford history with a fly ball to right, bringing the score to 11-3.28 DeLeon went all the way, scattering seven hits, walking four, and striking out nine for the win. Each team made two errors. The game took three hours to complete, and newspaper accounts made no mention of the attendance.29

The league announced plans to play out the season with seven teams, but behind the scenes the City of Hornell and the Cincinnati Redlegs were coming to agreement. The league announced on May 24 that a Cincinnati affiliate called the Hornell Redlegs would take Bradford’s spot.30 Johnson remained as general manager, and the team hired infielder Dave Bristol from the Wausau, Wisconsin, club to serve as player-manager.31 The new Redlegs team kept five former Bradford players—as well as the old team’s 5-15 record—and marked its arrival May 28 by winning its first game.32 The team finished the season in last place at 43-74, 31 games behind first-place Wellsville.

Bristol later managed part or all of 11 seasons in the majors for four teams, also serving as a big-league coach for many years. Monchak became a mainstay on the coaching staffs of Chuck Tanner when he managed the White Sox, Pirates, A’s, and Braves, winning a World Series ring with the 1979 Pirates. Johnson, caretaker in Bradford and full-time GM in Hornell, was serving as GM of the Shreveport (Louisiana) Captains of the Double-A Dixie Association when he died in 1971.33

In 1960 a man named in news stories as Stephen “Chip” Shapiro arrived in Western Massachusetts to promote a baseball tryout camp allegedly connected with the Washington Senators. He told a sportswriter he’d been the owner of the 1957 Bradford club in the New York-Penn League before cancer sidelined him for two years. He also claimed to have been a varsity shortstop for Temple University and the University of Southern California, and to have played four games for Washington in 1940. The latter claim, at least, is not supported by evidence in Retrosheet or Baseball-Reference.34 The following year, a Harold “Chip” Shapiro briefly served as owner and coach of the Camden (New Jersey) Bullets of the Eastern Pro Basketball League, just as Harold “Chip” Shapiro had briefly served as owner and manager of the Blue Sox.35

The story appears to end in 1974, with the publication of an obituary for 57-year-old Harold W. Shapiro.36 He was described as a Philadelphia native, a former Washington Senator, a former student at Temple and UCLA, and an All-American football player at the latter school—a claim not backed by UCLA football’s information guide, which does not include any Shapiros on its all-time list of lettermen.37

As of 2020, Bradford, Pennsylvania, had roughly half as many residents as it did in the 1950s.38 Barring a dramatic change in fortunes, it appears that the city’s closest enduring tie to professional baseball will remain its status as the long-ago birthplace of Baseball Hall of Famer Rube Waddell.

In addition to the specific sources cited in the Notes, I used the Baseball-Reference.com and Retrosheet.org websites for general player, team, and season data.

Neither Baseball-Reference nor Retrosheet provides box scores of minor-league games, but the May 23, 1957, edition of the Wellsville Daily Reporter published a box score for this game, part of which is shown here. 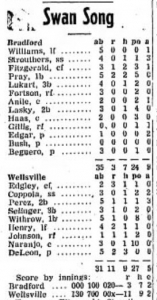 1 Baseball-Reference lists the team as the Bradford Beagles. However, almost all news reports from the time refer to the team as the Blue Sox. According to news stories, the unusual Beagles name was suggested by Zeke Bonura, the former big-league ballplayer and a beagle fancier, who was in talks to serve as the team’s manager.

2 United Press, “Bradford Quits Pony League,” Courier-Post (Camden, New Jersey), May 19, 1956: 15. Another team, the independent Hamilton Red Wings, folded after 14 games to leave the PONY League at an even number of clubs.

14 Baseball-Reference lists former Boston Red Sox pitcher Earl Johnson as having managed the team. This appears to be incorrect, as Bill Nowlin’s SABR Biography Project story on the Red Sox’ Johnson says he was a full-time West Coast scout for Boston during this period of time. Baseball-Reference’s list of minor-league players includes multiple Earl Johnsons (and E. Johnsons) and it’s not clear which one may have been the person given charge of the Blue Sox.

16 This excludes Monchak, who appeared in four games for Wellsville. At age 40, he was almost certainly playing to fill holes in the lineup, not in hopes of returning to the major leagues.

17 The next day’s game story in the Wellsville Daily Reporter listed DeLeon as 20 years old; Baseball-Reference lists him as 25.

22 The game story says the three-run rally happened in the third inning, but the box score shows it in the second. This story sides with the box score.

24 The shortstop is listed as Strouthers in the Wellsville newspaper’s box score but is identified as Philip Strother in Baseball-Reference. This story sides with The Sporting News, which mentioned a Bradford infielder named “Phil Strouthers” on page 40 of its May 15, 1957, issue.

26 The pitcher is “Beguero” in the Wellsville paper’s box score but is identified as Glodovaldo Peguero in Baseball-Reference. Several news articles about Blue Sox games mention a pitcher named Dodo Peguero, and this story sides with those references. See: “Olean Rallies to Win, 8-6,” Elmira Advertiser, April 29, 1957: 8, or “Elmira Remains Only Undefeated NYP Team,” Wellsville Daily Reporter, May 1, 1957: 7. News stories indicate Peguero also appeared in the field that year.

27 Presumably, the remaining three Wellsville runs were unearned. The box score does not assign them by pitcher.

34 Roger O’Gara, “Fair or Foul,” Berkshire Eagle (Pittsfield, Massachusetts), July 2, 1960: 16. Not only is there no regular-season big-league record for any player named Shapiro, there are no matching or similar names for Hal, Harold, Stephen or Chip Shapiro in Baseball-Reference’s list of minor-league players. This makes it seem unlikely that Shapiro had been a minor-leaguer who’d gotten some swings with the big club in spring training.

36 “Harold Shapiro, Ex-Big-League Ballplayer, Dies,” Hartford (Connecticut) Courant, February 5, 1974: 4. Shapiro’s age in the obituary (57) is consistent with the age that Stephen “Chip” Shapiro gave a Berkshire Eagle reporter in 1960 (43) in the article cited in Note 34.