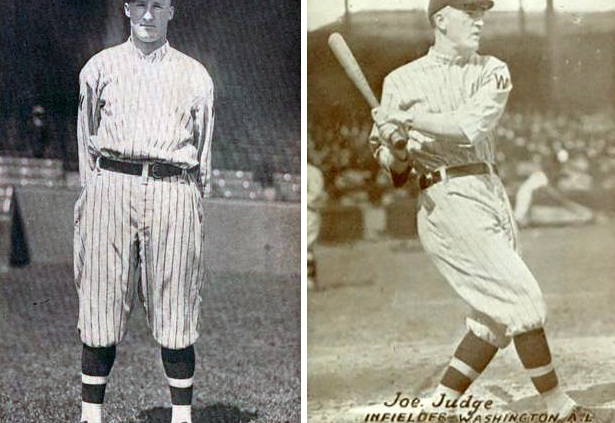 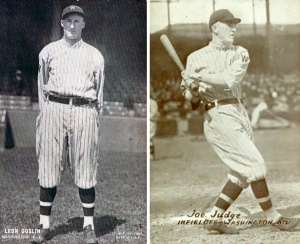 On Monday afternoon, May 26, 1930, at Yankee Stadium, Washington was looking to win its sixth in a row and 10th of its last 11. The Senators started the day in first place in the American League with a 25-10 record, four games ahead of the second-place Philadelphia Athletics. New York stood third at 18-15.

A crowd of 8,000, below average for the Yankees, was on hand to watch. They witnessed a power display from two of Washington’s veteran leaders – including a feat not seen in the majors in more than 40 years.

In 1930 Joe Judge was in his 16th season at first base in Washington. Goose Goslin had joined the Senators lineup in September 1921, seven seasons after Judge, and provided stalwart outfield play ever since. Both had been integral to the Senators’ 1924 World Series championship, the first title of any sort in franchise history, and their 1925 AL pennant-winners.

New York’s Lefty Gomez contained Judge, Goslin, and the rest of the Senators early on, and the Yankees staked him to a 4-0 in the first three innings. Lou Gehrig’s three-run double was the big blow off Nats lefty starter Lloyd Brown in a three-run first.

In the Yankees third, Lyn Lary singled to center, then advanced to second on Babe Ruth’s fly ball and to third on Tony Lazzeri’s fly ball; both were credited as sacrifices under a rule that was repealed after the 1930 season, meaning that neither Ruth nor Lazzeri was charged with an at-bat. Gehrig’s triple brought home the fourth Yankees run – and netted his fourth RBI of the day.

Gomez, supported by two double plays, had blanked Washington through the first three innings, but the Senators began to rally in the fourth behind Goslin and Judge. Goslin led off with a home run to right field. Judge followed with another homer deep to right. “Like the report of a double-barreled shotgun, they belted their homers into the laps of the startled folks in Ruthville,” wrote the New York Times’s John Drebinger.1

The Yankees still held a 4-2 lead, but the fifth inning was Gomez’s undoing. The Yankees’ left-hander yielded an infield single to Roy Spencer before walking Brown, the opposing pitcher. Leadoff hitter George Loepp bunted the runners to second and third, but Sam Rice, who entered the game batting .408 at age 40, grounded into a first-to-home fielder’s choice for the second out.

Goslin stepped to the plate with runners at the corners and delivered a three-run blast deep to right, putting Washington ahead, 5-4. As in the previous inning, Judge followed Goslin’s homer with one of his own into the right-field stands. The Senators now led, 6-4.

The floodgates were open. Buddy Myer’s bunt single ended the day for Gomez. Hank Johnson took the mound for the Yankees but couldn’t stop the Nats. Joe Cronin’s double to left sent Myer to third. Ossie Bluege beat out a slow roller to third for a single as Myer scored and Cronin advanced to third. After Bluege stole second, Spencer’s single to left scored Cronin and Bluege, giving the Nats a seven-run inning and a 9-4 lead.

The Yankees scored an unearned run in the sixth, but the Nats matched that with a run in the bottom of the inning. Cronin singled and stole second. Bluege hit a grounder back to Johnson, who gave Cronin a look at second, saw he was not running, and threw to first for the out. Once Johnson threw to first, however, Cronin took off and reached third. Then Cronin stole home as Johnson was winding up.2 Washington’s lead was 10-5.

In the bottom of the seventh, a baserunning mistake by Lary helped stifle a Yankee rally. After Johnson’s leadoff double and Earle Combs’s triple produced New York’s sixth run, Lary hit a grounder back to the mound, which Brown deflected but couldn’t corral. As Combs scored, cutting the deficit to 10-7, Lary beat Brown’s throw to first but didn’t realize the ball had gone past Judge and headed toward the stands.

Instead of advancing, Lary “was doing a tightrope act down the right-field foul line,” Richards Vidmer wrote in the New York Herald Tribune. “Had Lary had his head up and his wits about him he could have gone to second on the wild heave and had time for tea before the ball was retrieved.” Ruth followed with a grounder to first, which turned into a 3-6-3 double play, instead of sending Lary to third with one out.

In any case, the seventh inning outburst off Brown brought in the last two Yankees runs of the game before Garland Braxton pitched the eighth and ninth for Washington. Retrospectively, Braxton was credited with his third save of the season, aided by one final display of teamwork from Goslin and Judge. In the eighth, Goslin leaped above the left-field wall to rob Ben Chapman of a homer. Goslin threw to Myer, who relayed to Judge at first, doubling off Gehrig, who had rounded second, sure the ball wouldn’t be caught.3

Typical for the times, despite 17 runs scoring, the game took just 2 hours and 9 minutes. Three double plays by each side helped move things along.

The big day for Goslin and Judge helped the Senators maintain a four-game lead over the second-place Athletics. The pair of back-to-back home runs was a first in any game since the founding of the American League. Two Brooklyn batters, Johnny Frederick and Babe Herman, did it for the first time in the twentieth century National League a week after Goslin and Judge did it in the AL. It happened 10 more times through 1972, then it didn’t happen again for nearly 20 years.4 It was the only time in the history of either Senators franchise that the same two players hit back-to-back home runs twice in a game.

The loss dropped the Yankees into fourth place behind Cleveland, which swept a doubleheader from the White Sox that day. The Yankees ended the season in third with 86 wins.

Judge, who turned 36 the day before he and Goslin accomplished their slugging feat at Yankee Stadium, had one of the best seasons of his career in 1930, finishing with a .326/.410/.529 batting line. Goslin, however, ended his first tenure with the Senators sooner than anyone expected. On June 13, less than three weeks later, Washington owner Clark Griffith sent him to the St. Louis Browns in a controversial deal. Goslin later started in left field on two pennant-winning Detroit Tigers teams, including their 1935 World Series champions. He was inducted into the Baseball Hall of Fame in 1968.

In addition to the sources referenced in the Notes, the author relied on information from Baseball-Reference.com and Retrosheet.org. He also relied on several biographies from SABR’s Baseball Biography Project, including Cort Vitty’s biography of Goose Goslin and Joseph Wancho’s biography of Joe Judge.

2 Both Retrosheet and Baseball-Reference indicate that Cronin advanced to third on a passed ball by catcher Benny Bengough, but newspaper accounts in the Washington Post and New York Herald Tribune agree that Cronin took third on a grounder to the mound. Because the two news stories discuss the play in detail, they appear to be the more reliable sources. Richards Vidmer, “Senators Beat Yankees, 10-7, Getting 7 in 5th,”New York Herald Tribune, May 27, 1930: 27.

4 Society for American Baseball Research, The SABR Baseball List & Record Book (New York: Scribner, 2007), 59. Paul Hines and Jerry Denny of Indianapolis in the National League hit back-to-back homers twice on June 14, 1889, in their home park. All four were hit over fences 286 feet to left and 261 to right down the lines.