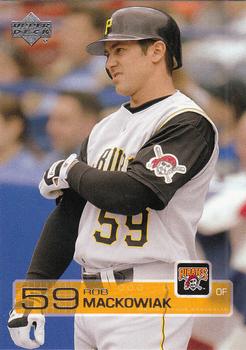 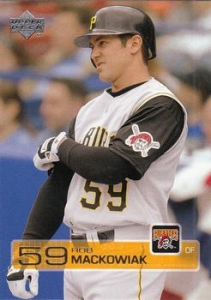 The Pittsburgh Pirates looked forward to a late-May double-header with the Chicago Cubs as an opportunity to not only improve their 20-22 record and reach .500, but to also bring fans back to PNC Park. The 25-20 Cubs – who had lost their last two games and won only three of their previous eight – were in town and maybe ripe for a sweep. For the home team, a streak of 11 consecutive losing seasons and questionable player decisions by management had contributed to declining attendance. Except for the opening of PNC Park in 2001, when attendance spiked despite a losing season, “attendance declined almost 10,000 a game from 2001 to last season and down more than 1,000 this season.”1

The attendance for this Friday twi-night opener of a Memorial Day weekend series was 24,657; the ballpark held 38,400. A large contingent of Cubs fans were in attendance to cheer on their “Cubbies,” who had won the NL Central Division in 2003 but lost to the Florida Marlins in the NLCS. The Cubs fans were hoping for a win to propel their team back toward the playoffs and a possible World Series title – their first since 1908.

Local writers saw the Pirates’ 2004 season as a transition year. “While more than one-fourth of the roster is comprised of rookies or players with less than a year in the big leagues, they’ve imported four free agents to fill some gaps while their best hopes of stabilizing the franchise toil in the minors for another year,” wrote one observer.2 In 2003, the Pirates were tied for the NL’s third best batting average, .267, and had hit 163 home runs, but they lost Reggie Sanders (31 homers, 87 RBI) and Matt Stairs (20 homers) to free agency and traded Aramis Ramirez, Kenny Lofton and Brian Giles during the season.3 The starting rotation of Kip Wells, Kris Benson, Ryan Vogelsong, Josh Fogg, and Oliver Perez was supposed to be the strength of the team but had delivered only 27 wins between them in 2003.4

The Cubs had bolstered their roster for 2004, acquiring first baseman Derrek Lee in a trade with the Florida Marlins and pitcher Greg Maddux as a free agent. Lee’s 31 home runs and 92 RBIs complemented a line-up that featured Sammy Sosa, Moises Alou,  and former Pirate Ramirez.5 Four-time Cy Young Award winner and future Hall of Famer Maddux had pitched for Atlanta since the Cubs let him go as a free agent after the 1992 season. He joined a strong starting Cubs rotation that led the 2003 NL in strike-outs (1,404), was second in complete games (13) and shut-outs (6), and third in ERA (3.83).6

Right-hander Matt Clement, whose roots were in nearby Butler, Pennsylvania, got Cubs manager Dusty Baker’s starting call. Clement’s high-school basketball skills had led to offers from Division 1 universities but his pitches in the mid-90s yielded a major-league contract with the San Diego Padres. After three years with the Padres and one with the Marlins, his trade to the Cubs in 2002 resulted in the lowest ERA (3.60) and most strikeouts (215) of his career. In 2003, he had won a career-high 14 games and worked at least six innings in 23 of his 32 starts.7 In Clement’s second start of the 2004 season, against the Pirates on April 14, he had pitched six innings and surrendered only two hits in an 8-3 win. Over nine starts, he was 6-3 with a 2.69 ERA.

The game was scoreless until the top of the fourth, when Ramirez doubled down the right-field line. After Wells retired Todd Hollandsworth and Lee, Corey Patterson singled to drive in the former Pirate and log the first Cubs run.

Through the first four innings, Clement had breezed through the Pirates lineup; he gave up one single, striking out five, and throwing 36 strikes among his 49 pitches. But in the fifth, after Randall Simon singled, Clement hit Bobby Hill. Tike Redman followed with another single, loading the bases. Clement’s next pitch sailed behind Wells’s head to the backstop and Simon scored, tying the game.9

After Wells struck out, Clement continued his wildness, hitting Jason Kendall. On a 2-and-2 count, Jack Wilson singled to score Hill and Redman for a 3-1 Pittsburgh lead. Kendall scored the fourth run of the half-inning on Daryle Ward’s sacrifice fly. When Clement plunked yet another hitter, Craig Wilson, Baker brought in reliever Jimmy Anderson.10 He HeHstruck out Rob Mackowiak to end the inning.

Wells and the Pirates sustained their 4-1 lead until the seventh inning, when the Cubs loaded the bases on Alou’s single and walks to Todd Walker and Ramirez. Mike Johnston relieved Wells and Baker called on Michael Barrett, a 27-year-old catcher signed as a free agent in the offseason, to pinch-hit for Hollandsworth. On Johnston’s fifth pitch, Barrett slugged the first grand slam of his career to lift the Cubs to a 5-4 lead.

Even before the game started, Pirates third baseman Rob Mackowiak had already had an eventful and unforgettable day. It began when he arrived home from a series in St. Louis about 2 in the morning. His wife, Jennifer, told him she would be awakening him at 7:00 a.m.; he would need to take her to the hospital for an emergency Caesarian section for the birth of their first child.11 At 11:12 a.m. the ebullient Mackowiaks welcomed Garrett Matthew – a healthy, 8-pound, 5-ounce, son.12

Mackowiak, a 53rd-round pick of the Pirates in 1996 and a utilityman in his third season, called McClendon and explained the circumstances before arriving at the ballpark only an hour before the first game. He was surprised to find himself in the starting lineup, batting fifth and playing third base; he’d been “expecting to be a backup, just because your head’s not all the way there at that point.”13

Cubs closer Joe Borowski was on the mound for the ninth inning, seeking his ninth consecutive save.14 Redman opened the inning with a triple to deep center field on a 3-and-2 count and scored on a single by Abraham Nunez to short right field to tie the game, 5-5. Kendall’s single moved Nunez to third base. After Jack Wilson lined out to center field and Nunez stayed at third, the Cubs intentionally walked Ward. With the bases loaded, Craig Wilson fanned for the second out and Mackowiak stepped in to face Borowski.

Mackowiak was 0-for-4 with two strikeouts against Clement and Anderson. But this was his first at-bat against Borowski.15 Mackowiak blasted Borowski’s 2-and-1 pitch over the right-center-field wall for a game-winning grand slam. With Pirates fans cheering wildly and the Cubs fans deflated, the home dugout emptied onto the field to mob the new dad and walk-off hero. An exhilarated Mackowiak told reporters that his good-luck charm was his hospital wristband and that he was “going to keep it on until it fell off.”16 Pirates broadcaster Greg Brown summed up Mackowiak’s heroics: “Mack wack, tally wack, give that dog a bone!  Grand slam! Hey, how ‘bout that, Garrett Mackowiak? Your dad just hit a game-winning grand slam!”17

In an improbable encore, Mackowiak homered again to tie the second game in the ninth, leading to Craig Wilson’s 10th inning walk-off homer that gave the Pirates a sweep of the doubleheader.18

My 16-year-old son and I attended this game and enjoyed it immensely. We were surrounded by Cubs fans whose “Let’s go CUB-bies!” chants seemed to be louder and stronger than our “Let’s Go Bucs!” responses. We were also entertained by a Cubs fan who sat near us and mimicked late Cubs broadcaster Harry Caray’s voice as he described most of the game action.

This game had many elements that make baseball exciting. The leads exchanged, two grand slams, and a ninth-inning comeback win for the underdog Pirates against a good Cubs team. For Pirates fans like us, the win got our hopes up for getting above .500 and maybe an end to the doldrums the Pirates had been enduring. Mackowiak’s combination of a walk-off grand slam and the birth of his son will always be a memorable part of Pirates history for us.

In addition to the sources cited in the Notes, the author consulted the Baseball-Reference.com and Retrosheet.org websites for player and team information and the box scores of this game:

10 Finder. The three hit batsmen in one inning marked only the 21st time it had happened in the major leagues and the first by a Cubs pitcher since Walter Thornton on May 8, 1898.