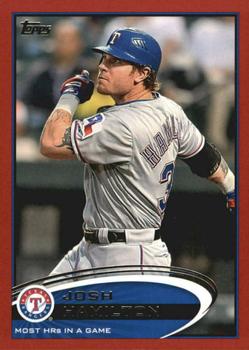 The Baltimore Orioles were playing some of their best baseball in years in May 2012. Coming into a four-game home series with the Rangers, they were tied with Tampa Bay for first place in the American League East. Their pitching staff had performed well, allowing just 23 runs in the last nine games. But disaster lurked in the form of the Rangers’ bats.

Texas was also a first-place team when it arrived in Baltimore, leading the Oakland A’s by four games in the American League West. They had lost four of their previous five games but reversed their slide with an offensive display in the first game at Camden Yards. Three home runs, including Josh Hamilton’s two-run shot in the ninth inning, sparked a 14-3 rout of the Orioles on May 7. Hamilton’s homer gave him a league-leading 10 round-trippers for the season.

A night later, Baltimore sent Jake Arrieta to the mound, seeking a rebound after the series opener. The 26-year-old Arrieta had pitched well in his last start; he went eight innings and struck out nine in Baltimore’s 5-0 win over the Yankees. Arrieta had yet to find his footing as a starter, going 16-14 in his first two years in Baltimore. (After a trade to the Cubs, he flourished, eventually earning the 2015 National League Cy Young Award.)

The right-hander got leadoff batter Ian Kinsler to ground out to second. But he walked Elvis Andrus on five pitches. That brought up Hamilton. The slugger sent Arrieta’s first pitch over the left-center-field wall, giving the Rangers a quick 2-0 lead.

Arrieta retired Texas in order in the second. A similarly quiet third seemed likely when Mitch Moreland and Kinsler grounded out. But Andrus bunted himself on base, which brought up Hamilton a second time. He took two pitches for balls, then sent Arrieta’s third pitch over the Camden Yards fence in almost the same location as his first blast.

Adrian Beltre followed Hamilton. On a 1-and-2 count, the Texas third baseman drove Arrieta’s fastball over the right-field wall for a 5-0 Rangers advantage. It was the fourth time so far in 2012 that Rangers hitters had gone long in consecutive at-bats.

Hamilton’s third at-bat against Arrieta, in the fifth inning, resulted in a line-drive double, clearing the wall on one bounce. Afterward, Arrieta remarked that Hamilton was a “very special hitter. He’s the kind of guy who really likes to jump on the first pitch, and we know that as a staff. I think it was just we did him a favor by throwing him too many hittable pitches. He didn’t miss tonight.”1

The immediate beneficiary of Texas’s home-run derby was starter Neftali Feliz. The right-hander had spent the three previous seasons in the Rangers bullpen, notching 74 saves. He entered the game with a 1-1 record and 3.81 ERA. Feliz “had a 2-0 lead to protect before throwing his first pitch — and maintained that advantage just like when he was a closer.”2

Feliz breezed through the first five innings. He allowed just two hits — a double by J.J. Hardy in the first and a leadoff single by Nick Markakis in the fourth — while striking out seven Orioles. Baltimore finally scored in the sixth when Endy Chavez doubled into left-center and came home on Markakis’s second single of the game. The lone run still left the Orioles trailing, 5-1.

They would soon trail by even more after Hamilton batted in the seventh. With Andrus on base after a single, Hamilton saw a 78-mph changeup and let loose with his third two-run home run of the game. This blast came off Zach Phillips, whom the Orioles had just called up from their Triple-A affiliate in Norfolk, Virginia.

The Rangers added another run in the seventh. Beltre walked, moved to second on a walk to David Murphy, and came home when Nelson Cruz doubled to right field. Beltre’s run made it 8-1.

Hamilton had one more at-bat, in the eighth. Once again Andrus was on base, reaching on a fielder’s choice after Kinsler led off with a single. Darren O’Day was now pitching for Baltimore. O’Day had been signed from the Rangers in the offseason after three seasons in Arlington. Hamilton saw two strikes from O’Day before he connected with his longest hit of the day. His fourth home run cleared the center-field wall at Camden Yards.

“Coming around second base and looking in your dugout and seeing how excited your teammates are and then touching home plate and going into a reception like that from them was the best part of it all,” Hamilton said.3

After Feliz pitched the first six innings, relievers Koji Uehara, Robbie Ross, and Scott Feldman closed out Texas’s 10-3 win, with the only runs allowed coming on Hardy’s and Markakis’s back-to-back home runs off Ross in the eighth inning.

Hamilton’s historic night was the main topic of postgame discussion. Andrus, who was on base for each of Hamilton’s homers, said, “I’m his good luck charm. Every time I get on base, he hits a home run. He did that yesterday too. It’s a lot of fun.”4 His teammate Murphy noted, “After he hit the third one, I knew that if they pitched to him in his fifth at-bat he was going to hit a home run. I’ve never seen him that focused before. I’ve seen him locked in before, but his approach was perfect today.”5

Hamilton also “gained his share of fans” with his blasts. When he went out to center field at the start of the game, Baltimore fans welcomed him with heckles. “I get worn out by fans here in Baltimore,” he said. “As the game went on, I found I was getting worn out less and less in the outfield.”6

As he “rounded the bases in the eighth inning, those who remained of the 11,263 on hand at Oriole Park offered their appreciation by giving Hamilton a standing ovation. The crowd gave another ovation when Hamilton took his spot in center field for the bottom of the eighth.”7 Hamilton tipped his cap to them, saying, “When I came out after the fourth one, the crowd and appreciation lets you know that they are true baseball fans. They’re not only fans of their own team, but they love the game and appreciate it when someone does something of that caliber.”8

O’Day told reporters that the 0-and-2 sinker on Hamilton’s fourth home run was “the worst pitch of my career,” adding, “The guy’s already got three bombs and I had him 0-and-2 and I throw it right over the middle. I couldn’t have soft-tossed it any better to him. I’d like that pitch back for sure. You can’t say enough about the day he had.”9

It was the second time the Orioles had allowed a four-home-run day. On June 10, 1959, Rocky Colavito’s four home runs helped the Indians eke out a 13-12 win in Memorial Stadium, the first home of the Orioles.

Hamilton expressed his thoughts about his accomplishment when he told reporters, “I’d never hit three in a game before. What a blessing that was, and then to hit four was just an awesome feeling to see how excited my teammates got. It reminds you of when you’re in Little League and a little kid. Just the excitement and why we play the game.”10

Hamilton had taken a long road to claim his part of baseball history. After being drafted first in 1999 by the Tampa Bay Devil Rays, drug and alcohol addiction forced him out of baseball. But he recovered and, after spending a year in Cincinnati, was traded to the Rangers, where his career took off. Hamilton was the American League MVP in 2010.

He reflected on the course that his career had taken, saying, “Understanding that what I’m doing and what God’s allowed me to do coming back from everything I went through and allowing me to play the game at the level I play it, it’s pretty amazing to think about.”11

After Texas’s two-night power barrage, the Rangers and Orioles split the final two games of the series. The teams finished 2012 in second place in their respective divisions, with identical 93-69 records. They met in the American League wild-card game on October 5 at the Rangers’ home field, The Ballpark in Arlington. This time, the Orioles shut down the Rangers’ league-leading offense in a 5-1 win. Hamilton, who finished second in the AL with 43 home runs, was hitless in four at-bats, with two strikeouts.